Full slate of games on tap this week 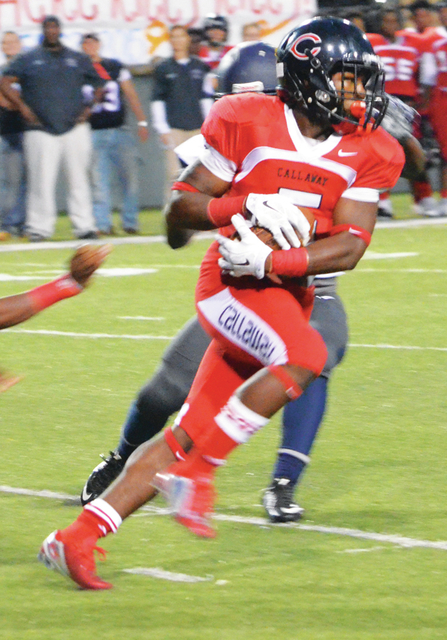 Cedric Maynard, who has more than 2,000 rushing yards in five games, will lead the Callaway Cavaliers against Cedartown in a Region 5-AAA game this week. Kevin Eckleberry | Daily News

http://lagrangenews.com/wp-content/uploads/sites/37/2015/10/web1_10-5-maynard.jpgCedric Maynard, who has more than 2,000 rushing yards in five games, will lead the Callaway Cavaliers against Cedartown in a Region 5-AAA game this week. Kevin Eckleberry | Daily News

LAGRANGE – The Callaway Cavaliers were one heart-breaking defeat away from a third consecutive region championship.

After winning their first four region games a year ago, the Cavaliers only needed a home win over the Central-Carroll Lions to make it a three-peat.

The Cavaliers lined up with seconds remaining for what would have been a game-winning field goal, but the Lions came through with the block, and they returned it all the way to the end zone for for the game-winning touchdown.

The Lions won that remarkable, memorable game 30-24 to claim the Region 5-AAA championship, while the Cavaliers settled for second.

This week, the Cavaliers will begin the process of trying to climb to the top of the region once again.

After taking last week off, Callaway will be at home on Thursday for its Region 5-AAA opener against Cedartown.

That will be the first of four games in three days at Callaway Stadium.

On Friday, Troup will open its Region 5-AAAA schedule against Woodward Academy, and LaGrange will play Carver on Saturday.

There will also be a college game on Saturday, with LaGrange College opening its USA South schedule against Greensboro

Callaway (4-1) will bring a four-game winning streak into Thursday’s game, while Cedartown (0-5) is still looking for its first win.

The Bulldogs have had some close calls.

They were blown out in their first two games, but their past three losses are by a combined 22 points.

Callaway and Cedartown have one common opponent.

Troup’s assignment this week is a difficult one.

Woodward Academy is 5-0, and it has scored 34 or more points in four of its five games.

Troup (0-5), which didn’t play a game last week, is still chasing its first win of the season.

LaGrange (3-3) will have an extra day to prepare for Saturday’s Region 1-AAAAA showdown against Carver.

The Grangers are 1-1 in the region after falling to Columbus 21-13 last week.

Lafayette Christian School (4-3) is 0-1 in the region, and it likely has to win at Cross Pointe on Friday to keep its playoff hopes alive.