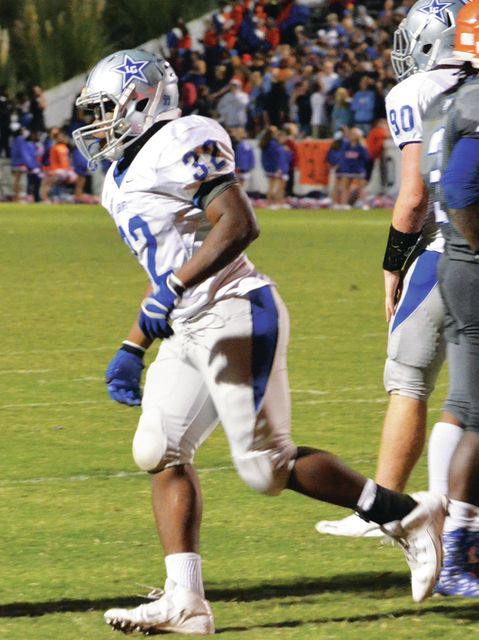 LaGrange defensive back Bo Russell gets in position before the snap during Friday’s game. Kevin Eckleberry | Daily News

http://lagrangenews.com/wp-content/uploads/sites/37/2015/10/web1_LHS15.jpgLaGrange defensive back Bo Russell gets in position before the snap during Friday’s game. Kevin Eckleberry | Daily News COLUMBUS – They were in business.

So much had gone wrong for the LaGrange Grangers during Friday’s game against the Columbus Blue Devils, but with time winding down in the fourth quarter, they still had a chance.

After LaPerion Perry completed a 30-yard pass to Mike Hardy, the Grangers had the ball in Columbus territory needing a touchdown and a two-point conversion to tie the game.

Unfortunately for the Grangers, that catch by Hardy was wiped out by a penalty, and on the next play, the Blue Devils came through with an interception, basically sealing the outcome, and they went on to claim a 21-13 victory.

The new-and-improved Blue Devils controlled much of Friday’s game, and they were able to withstand a late charge by the Grangers.

Trailing 14-0 in the fourth quarter, the Grangers made things interesting when they put together two touchdown drives, but it was too little, too late.

The Grangers had their chances.

In addition to the two touchdown drives, the Grangers had two other great scoring chances.

On their first possession of the game, the Grangers made it to the Blue Devils’ 17-yard line before they lost a fumble.

Then on the first possession of the second half, LaGrange advanced to the Columbus 4-yard line before a fourth-down play failed.

Defensively, LaGrange had no answer for Columbus wide receiver Essang Bassey, who did his best Julio Jones impression with five catches for 204 yards, with quarterback Derrick James doing a nice job of getting him the ball.

Perry continued to impress at quarterback for the Grangers with 156 rushing yards on 12 carries, but it wasn’t enough.

Trailing 7-0 at the half, the Grangers looked like they were going to punch the ball in at the start of the third quarter.

After a 12-yard keeper by Perry, Jeremiah Wright ripped off a 42-yard run all the way to the Columbus 12-yard line.

The Columbus defense tightened up from there, and LaGrange was stuffed on a fourth-down play.

The Blue Devils were backed up on their own 2-yard line, and the Grangers were looking to get the ball back in great field position if they could make a defensive stop.

The Blue Devils only netted three yards on the first two plays, but on third down, James threw it deep, and it was Bassey hauling in the ball for a 48-yard completion.

Three plays later, James threw a 5-yard touchdown pass, and the lead was 14-0 with 3:47 left in the third quarter.

At that point of the game, it was obvious the Grangers had to score a touchdown if they wanted to have any chance to win, and they made it happen.

The Grangers put together an impressive 14-play, 77-yard scoring drive that was capped by a Keaote Davis 2-yard touchdown run, and Matthew Thomas converted the extra point to make it a 14-7 game with 10:43 to play.

The Grangers had plenty of time remaining if the defense could make a stop, but they couldn’t slow down Bassey.

Bassey looked human when he was stopped for a loss on first down, but on second down, he caught a 59-yard pass from James to the 21-yard line.

Once again the Grangers were in a position where they had to score, and now they couldn’t afford to take a whole lot of time to do it.

The Grangers did score, and they only needed about 90 seconds to make it happen.

Perry had a 26-yard gain to the Grangers’ 42-yard line, and the junior then completed three straight passes, including one covering 32 yards to Enrique Moody.

Then from the 7-yard line, senior running back Undriel Copeland got the call, and he powered through the middle of the Columbus defense for his first touchdown of the season.

LaGrange went for two after the touchdown, and the attempt was unsuccessful, and Columbus had a 21-13 lead with 5:38 to play.

Could the Grangers make a defensive stop?

This time they could.

Columbus went three-and-out, and LaGrange took over at its own 24-yard line with 3:26 to play.

On second down, Perry threw it deep, and Hardy leaped up and pulled the ball away from a Columbus defender.

It was a sensational catch by Hardy, but unfortunately for the Grangers, a holding penalty wiped the play out.

Perry went deep again on the next play, but this time the pass was intercepted with a little more than two minutes remaining.

Columbus ended up punting the ball, but there were only 17 seconds left, and LaGrange got the ball at its own 18-yard line with nine seconds remaining.

Perry had an 18-yard run on first down, but the game ended on an incompletion.