Cavaliers ready to chase a title 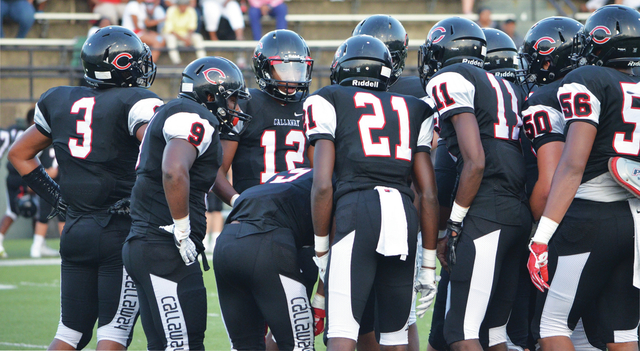 In essence, that’s the message Callaway High head football coach Pete Wiggins has tried to deliver to the seniors on his team this season.

“I had a lot of conversations with my seniors this season, and every year I do that, about how special their senior year is, and how special the game is, about the camaraderie on your team, and the joy you get,” Wiggins said. “I talk to them about how quickly things go by, and to take advantage of every opportunity. That’s on Friday night, but that’s also the relationship you have with your teammates, and your coaches. It’s something you’ll have for a long time.”

Wiggins is hoping his seniors, and all of the players, will have a whole bunch of football to enjoy the rest of the season.

The Cavaliers (4-1), who were off last week, will return to the field on Thursday for their Region 5-AAA opener against Cedartown.

The Cavaliers won’t have another week off until the season is over, and they’re hoping that won’t come until a long time from now, perhaps in 10 weeks after the state-championship game is played.

Things are looking good for the Cavaliers as they make the transition into region play.

After a season-opening loss to LaGrange, Callaway has won four consecutive games, and it will be one of the favorites to capture the region championship.

Through the first five games, Central-Carroll, Callaway and Pepperell have been the most impressive teams in the region.

While Central-Carroll (5-0) is unbeaten, Callaway and Pepperell are both 4-1.

As for the other three teams in the region, Haralson County and Rockmart are both 1-4, and Cedartown is 0-5.

A year ago, Central-Carroll won the region championship with a 40-34 victory in the regular-season finale against Callaway, and those two teams will face off in the last game of the regular season once again this year.

Whatever a team’s record is, Wiggins said his team will need to be ready to play each week, beginning with Thursday’s showdown with Cedartown.

“Each game in our region will be hard and physical,” Wiggins said. “We just have to take it one week at a time, and I think that’s what our kids will do.”

While Cedartown has come up empty in each of its games this season, it has been competitive in its past three games.

In the Fayette County game, Cedartown had the ball late and it was driving for a potential go-ahead touchdown, but a lost fumble ended its chances.

Like Callaway, Cedartown didn’t have a game last week as it geared up for the region schedule.

“We just have to keep working and improving, and keep trying to set ourselves up for a run in the playoffs,” Cedartown head coach Scott Hendrix said.

As far as Wiggins is concerned, forget about the record when it comes to a Cedartown team that he said is dangerous.

Callaway had its hands full with Cedartown last year on the way to a 37-21 victory in a game that was close almost the whole way.

“Last year we went up to Cedartown, and it was a physical, hard-fought ballgame,” Wiggins said. “We went ahead late in the game. They’ve got a lot of tradition, and their kids believe in what they do, and they play hard. We’ve got to play Callaway football and be ready to go Thursday night.”

Callaway rolled into its off week with a 42-24 victory over the Troup Tigers on Sept. 25.

The Cavaliers led 35-3 at the halftime of that game, and the Tigers did some nice things in the second half to close the gap, but the outcome was never in doubt.

It was another spectacular night for senior running back Cedric Maynard, who ran for 313 yards on just 15 carries, and he had two touchdowns.

In his past two games against Harris County and Troup, Maynard has run for more than 600 yards and he has scored six touchdowns.

Callaway’s defense delivered a strong effort as well, especially in the decisive first half when it limited Troup to a field goal.

Linebacker Javoski Leverette continued his strong senior season with 11 tackles, and he has been in double digits in tackles in every game this season.

Wiggins said the off week was helpful as some players look to recover from injuries.