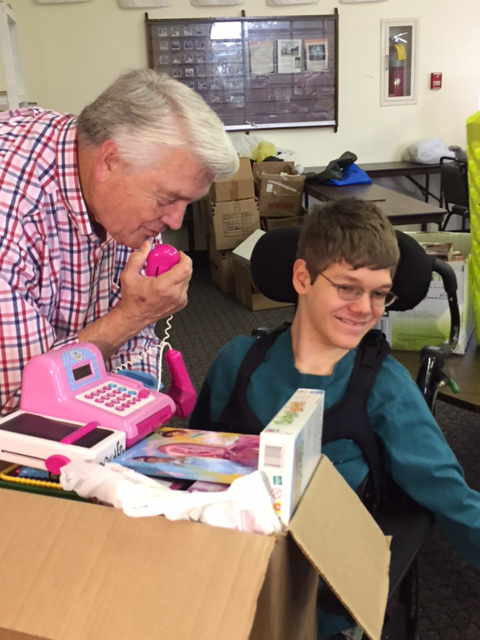 Dalton Tate, 15, son of Patrick Tate and Kim Reaves-Tate, helps his grandfather, Payne Reaves, bring in items for an upcoming yard sale Sunday at Advent Lutheran Church on Vernon Road. The yard sale’s proceeds will benefit the Miracle League of LaGrange, an organization that aims to build a special-needs baseball field in Troup County for kids like Dalton, who has cerebral palsy.

http://lagrangenews.com/wp-content/uploads/sites/37/2015/10/web1_WEBMiracleLeague01.jpgDalton Tate, 15, son of Patrick Tate and Kim Reaves-Tate, helps his grandfather, Payne Reaves, bring in items for an upcoming yard sale Sunday at Advent Lutheran Church on Vernon Road. The yard sale’s proceeds will benefit the Miracle League of LaGrange, an organization that aims to build a special-needs baseball field in Troup County for kids like Dalton, who has cerebral palsy.

LaGRANGE — A group of local parents and advocates hope a miracle will come to Troup County.

On Saturday, the first phases of a fundraising campaign to build a special baseball field for children with disabilities will take place at Advent Lutheran Church, 1416 Vernon Road.

Between 8 a.m. and noon, the church’s doors will open for a yard sale to benefit Miracle League, a nonprofit that allows children with mental and physical disabilities to play on a baseball field “and lets them experience the joy of America’s favorite pastime,” according to the group’s website.

Last school year in Troup County, there were 1,056 students with disabilities, according to Yolanda Stephen, a spokesperson for the school system.

Patrick Tate, a LaGrange resident and father of 15-year-old Dalton Tate, who has cerebral palsy, said the unique field he hopes to see in Troup County will help bring smiles to the faces of both players and spectators. He and his son Dalton have played in a Miracle League team in Opelika, Alabama, for four years, he said.

“I’ve missed maybe two games in the whole four years,” he said. “It’s a lot of fun. … If you ever go to one of those games, it’ll change your life. It’s amazing.”

The game is played on a specialized field that’s suitable for players with limited or challenged mobility, but in the Opelika field — as well as the one envisioned for Troup County — the field is complete with dugouts, shaded spectator seating and an announcer’s box, Tate said.

“They have a special surface on the playing field,” he explained. “It’s like a rubberized mat. The (baseball) diamond, the bases, the infield and outfield, it’s all made into it. There’s nothing raised on it, and it’s all outdoors.”

In the Miracle League games, everyone is a winner, Tate said.

“They have two innings, and what they do is, on every inning the whole team bats a round and the last person gets a grand slam, so everybody comes home,” he said. “There are no outs, and everyone plays for fun. There are no outfielders, but the players have a buddy out there with them.”

Tate is his son’s buddy because Dalton is in a wheelchair and is unable to swing the bat on his own.

“See, Dalton doesn’t walk, he doesn’t talk and he doesn’t eat by mouth. He’s in a wheelchair, and I help him hold the bat,” Tate said. “He puts his hands on the bat and I put mine on too, and we hit that ball together.”

Building the ball field won’t be cheap, though, Tate admits. That’s why his mother-in-law is helping to arrange the yard sale at Advent Lutheran Church.

“This is actually the first fundraiser that our church has agreed to host,” said Mellody Hartelius-Reaves, Tate’s mother-in-law. “Hopefully, we can raise money to start the seed money for our artificial turf. There’s a whole room full of electronics, baby clothes … we’ve got two couches, side chairs, lamps and tables … we have a lot of stuff. What’s really neat is that people have been so generous and donated everything.”

It may take more than yard sales to raise the funds necessary for the project.

LaGrange businessman Matthew Stermer, who recently founded and incorporated Miracle League of LaGrange with his wife, Joanne, estimated the project could cost as much as $800,000. Stermer has already filed Internal Revenue Service paperwork to become a 501(c)3 nonprofit and he hopes local businesses will jump on board with the idea and financially back it.

Stermer said he was hoping to have the field in place by the 2016 baseball season, but more than likely, his group is about a year away from making the field a reality. Once it happens, though, the group plans to build the baseball field, as well as a playground that’s suitable for children with disabilities.

For more information on the national Miracle League organization, visit www.themiracleleague.net, or to donate an item for Saturday’s yard sale, contact Mellody Hartelius-Reaves at mellody@bellsouth.net.