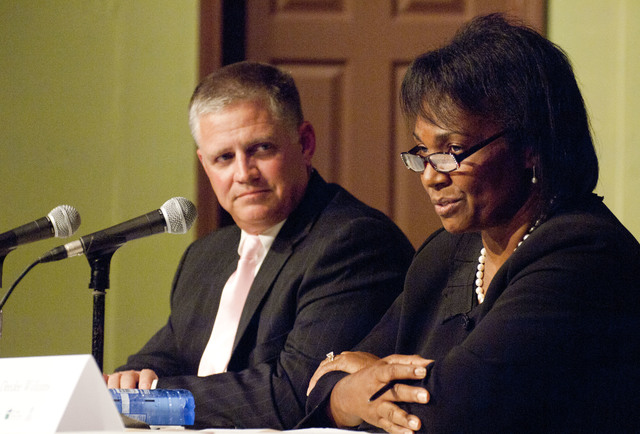 Drew Ferguson, West Point’s incumbent mayor, defends a move by the city and its development authority to donate $100,000 to the THINC Academy as mayoral challenger Deedee Williams listens during a candidate forum at the New Horizon Theater in West Point. Early voting begins Monday.

http://lagrangenews.com/wp-content/uploads/sites/37/2015/10/web1_WEB1006WPForum01.jpgDrew Ferguson, West Point’s incumbent mayor, defends a move by the city and its development authority to donate $100,000 to the THINC Academy as mayoral challenger Deedee Williams listens during a candidate forum at the New Horizon Theater in West Point. Early voting begins Monday. Reporter’s note: This is the first in a two-part series on the West Point mayoral forum. Part two will appear in Wednesday’s edition.

WEST POINT — With less than a week before early voting begins, incumbent Mayor Drew Ferguson and challenger Deedee Williams squared off Monday at the New Horizon Theater for their first and only public forum.

Economic development and the city’s growth dominated the discussion and Ferguson was the first to go on the offensive during the hour-long debate when he stated that his opponent, Williams, hadn’t in the past shown support for diversifying the city’s automotive-heavy economy.

Asked what the city’s greatest strengths and weaknesses are, Ferguson, a two-term mayor and dentist by trade, said he hoped to create jobs for the city’s 3,700 residents outside the automotive sector and grow educational opportunities. He also touted his leadership during the revitalization of the downtown area and said that city planning would be key to accomplishing those goals.

“If you go back and look at how we conducted ourselves at our 10th Street redevelopment plan, how we clearly articulated a vision that said we wanted a diversity of jobs,” Ferguson said. “We wanted education that was relevant to this community, and we wanted a sense of place, I think that our community did a good job of articulating that.

“I find very interesting in Deedee’s remarks is that she was the lone member of our development authority that voted against a project that was not automotive,” he continued. “That was AMK9, a unique company that has brought a significant number of jobs and investment to our community. Her vote against that maybe speaks to her position as far as diversifying our economy.”

Williams countered that she voted against the project because she wasn’t provided sufficient details on the company’s plan to create jobs and grow the community.

“I think that being a member of the development authority, my first and foremost obligation was to be a good steward of the citizens’ tax dollars that end up in the coffers of the development authority,” she said. “And, as a member, whenever something comes before me as a vote, if I don’t have all of the information, I’m not going to vote for it. If I don’t feel like it’s for the good of the community, I’m not going to vote for it. I’d like to know how many jobs for local people came as a result of that project.”

As the forum continued, LaGrange Mayor Jim Thornton, who moderated, asked the two candidates what they would do to attract news businesses to the community. The questions were written by the forum’s host, the LaGrange-Troup Chamber of Commerce, and only Thornton and chamber president Page Estes knew ahead of the forum what would be asked.

“Do you have any specific new ideas for recruiting new business, or expanding existing businesses?” he asked.

Ferguson said creating quality, affordable housing and — again — growing education opportunities would be the key to new investment. He also took the opportunity to put Williams on the defensive about her record as a member of the city’s development authority.

“Being able to create quality residential housing, moving beyond poverty-based housing and bottom-of-the-line rental properties is vitally important,” he said. “Education, making sure that we have education from cradle to college is vitally important to this community. … The THINC College and Career Academy is specifically designed to create pathways for our students to go from high school directly into the workforce and into college.

“What I find very unique in that is that when our West Point development authority was asked to donate $100,000 for the creation of a science lab, again Mrs. Williams was the lone dissenting vote,” he continued. “Again, she refused to support public education in that manner. … Deedee was on the steering committee of that, and when it came time to support it, she failed at that.”

The comment drew a sharp rebuke from Williams, a professional human resources consultant who helped bring Kia to West Point. She said the board had entirely flipped its position in a matter of two months when no meetings had occurred. She said she supported the THINC academy, but insinuated that decisions were made outside of official meetings and threats of taking investments elsewhere were made to coerce board members into making the $100,000 grant to THINC.

“(THINC) a great model and I think it’s definitely on the right track of what we need to do to prepare our young people for some of the higher paying jobs that are offered by Kia and some of the suppliers,” she said. “However, we were asked to pay $50,000 initially. The entire board was against it. Two months later, we’re asked to pay $100,000. I hadn’t attended any other meetings in the meantime, but somehow, the focus had shifted totally.

“There was apparently some discussion for everybody to be on board with it, without any discussion in the meeting,” she continued. “When there are meetings before meetings, when the people that should be making the decisions are left out of the dialogue that will help you make your mind up … yes, I’m going to continue to vote no.”

“The third and possibly the most important reason, though, is the information I was asking for had to do with how many children from our community, or in this program, what’s the demographics of the students in the program. Nobody could produce this, and seemed to care less about it.

“The problem is, nobody seems to want to answer your questions. Nobody wants to provide the information about how we spend our citizens’ dollars, but they want you to go along with what they’ve decided somewhere with some select group of people; I’m not going to be party to that. $100,000 from this community? We’re 3,700 in population. I can only say our children in the school system is probably a lot less of a percentage than LaGrange or Hogansville. Hogansville gave nothing. LaGrange gave $50,000, I believe. So for us to give twice the amount that LaGrange has given is just unreasonable.”

“I think that the balance of the board felt that those questions had been answered,” he said. “To assume Deedee’s rhetoric of decisions being made prior to different meetings, I just find that that is completely wrong. To say to the council members and the other authority members that they’re doing something that is not correct or unethical, I think is really disrespecting the members of those boards.”

On the offensive for the first time in the debate, Williams countered back that Randy Jackson, Kia Motors Manufacturing Georgia vice president for human resources, had been brought in as a pinch hitter to speak to the development authority board members and convince them to donate the money.

“In the second meeting, you asked Randy Jackson to come and kind of twist our arm, I suppose,” she continued. “Maybe you didn’t ask him to do it, but when a person comes and says, ‘OK, if you don’t do this, if you don’t give us this money, you know we can go and let LaGrange development authority do the next bond issue.’ And the bond issue, you know what that means, right? That’s how we get our money.

“So basically, they’re not going to give us any more money unless we do this. I think it’s time for this blatant quid-pro-quo atmosphere in the city of West Point … there’s no place for it.”