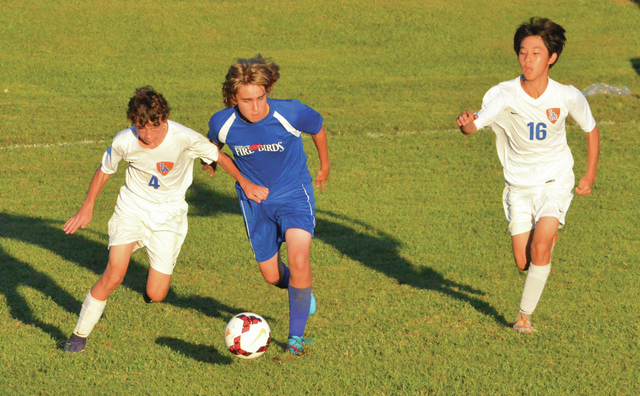 LaGrange Academy’s Zach Callaghan scored four goals in Tuesday’s 5-2 win over Academe of the Oaks in the first round of the GICAA state tournament. LaGrange Academy will play a semifinal game on Thursday. Kevin Eckleberry | Daily News

http://lagrangenews.com/wp-content/uploads/sites/37/2015/10/web1_10-7-soccer5.jpgLaGrange Academy’s Zach Callaghan scored four goals in Tuesday’s 5-2 win over Academe of the Oaks in the first round of the GICAA state tournament. LaGrange Academy will play a semifinal game on Thursday. Kevin Eckleberry | Daily News LAGRANGE – He made the final game on his home field a memorable one.

In the opening round of the Georgia Independent Christian Athletic Association state soccer tournament on Tuesday, LaGrange Academy took care of Academe of the Oaks 5-2, and it was senior Zach Callaghan leading the way with four goals.

Fellow senior Will Trotter also had a big game with a goal and three assists as the Warriors advanced to the semifinals on Thursday at Clayton State University.

If LaGrange Academy wins on Thursday, it would play for a state title on Friday, and that game would also be at Clayton State.

Callaghan, a varsity starter since he was in the eighth grade, now has 26 goals during his phenomenal senior season.

“It was a good night,” Callaghan said. “It was special, it definitely was. I’ve been starting here since I was in the eighth grade, and I played middle school here in the sixth grade and seventh grade. It’s been a long ride.”

Callaghan and his fellow seniors have accomplished a great deal over the years, but they’re still chasing a state championship.

The Warriors are two games away from making that a reality, and Callaghan said anything short of that will be a disappointment.

“Anything besides winning a state championship will be a failure,” Callaghan said. “We want it, and we think we can get it.”

The Warriors came close the past two seasons, making it to the championship game before falling.

Now they’re just one win away from getting another shot at the title.

“We absolutely have an opportunity to go get it done,” LaGrange Academy coach Mike Petite said.

LaGrange Academy and Academe of the Oaks were playing for the third time this season, and the script was a famliar one.

In the two regular-season meetings, LaGrange Academy won 5-0 and 5-2.

Academe of the Oaks did strike first in Tuesday’s game, putting LaGrange Academy in a 1-0 hole with an early goal.

“They had the lead on us. They scored a good goal,” Petite said. “Our reaction was, big deal. We knew we could handle it, and they did. That’s what I told them, you guys did a great job of responding to that goal. No one got upset, no one was fussing. And we just said, all right let’s go, and at that point we took it over.”

It was Trotter who pulled the Warriors even with a goal in the 24th minute, and just three minutes later, Callaghan scored the first of his four goals to give his team a lead it wouldn’t relinquish.

Callaghan scored again four minutes before the half to give the Warriors a 3-1 lead.

Ten minutes into the second half, Callaghan made a penalty kick to make it a 4-1 game, and after Academe of the Oaks scored to get within two, Callaghan capped the scoring with a goal with 12 minutes remaining.

Petite said that final goal exemplified the unselfishness of Trotter.

“He was inside and he could have scored himself, but he played a perfect ball to Cal, and Cal hammered it home,” Petite said. “That shows what Will can do.”

Evan Smith had five saves in goal for the Warriors.