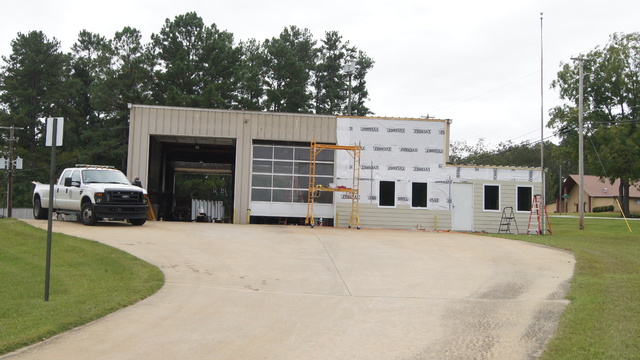 HOGANSVILLE — If you stop by the Troup County fire station in Hogansville over the next few months, you won’t hear any sirens. Instead, those noises have been traded for the buzz of saws, the slam of hammers and the conversation of construction.

The fire station is undergoing renovations for the next few months to allow for upgrades and expansions. The station serves the city of Hogansville, which contracts with the county for fire service.

The project is funded with Troup County special-purpose, local-option sales tax, or SPLOST, funds with a budget of $70,000. The county also is using inmates for labor on the project to reduce overhead.

The inmate labor will save the county $40,000 to $50,000 in overhead costs, Knight said. The upgrades and renovations will allow for an expansion from two personnel to three and allow them to take online training and use computer-based reporting. The upgrades will also allow for later expansions and upgrades.

“We’re trying to plan for the future,” Knight said.

The remodeled building will have separate bunk rooms for each of the three personnel, a supervisor’s station, a day room and two bathrooms. The remodeled station will be better insulated and have upgraded HVAC.

The project is expected to take eight to nine weeks, depending on materials, said Sgt. Kenneth Hardy of the corrections department, who is acting as construction supervisor.

The project utilizes five inmate workers who are skilled in construction trades ranging from electrical, carpentry to sheetrock finishing.

“All you’re paying for is the cost of materials. There is very little overhead,” Hardy said. “Three stations can be replaced for what it costs to build a new one.”

The station’s firefighters are operating out of the Hogansville Senior Center until renovations are complete.

The Hogansville fire station was built in the early 1990s. Crews are in their third week of construction.