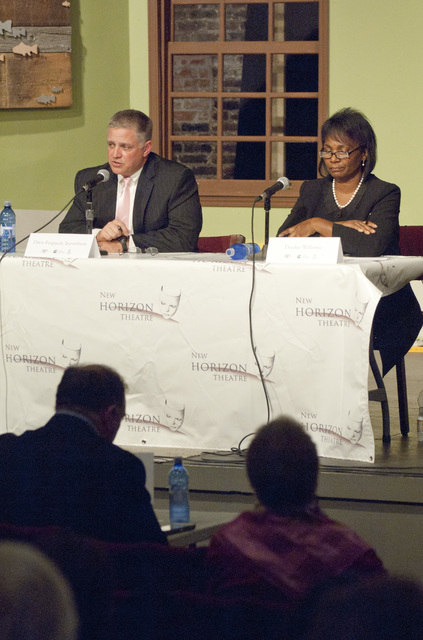 Reporter’s note: This is the final in a two-part series on Monday’s West Point mayoral forum. The first part appeared in Tuesday’s edition and is available at www.lagrangenews.com.

WEST POINT — The second half of Monday’s West Point mayoral forum was markedly less contentious, with the two candidates even agreeing on some points.

Incumbent Mayor Drew Ferguson and his challenger Deedee Williams spent about an hour speaking on issues the city faces, but economic growth for the city of about 3,700 people dominated the forum.

Asked what he would like to see the city’s population rise to in four years, Ferguson said he thought it would be reasonable to see a 25 to 30 percent increase in population.

“The way that you get there is providing quality education and quality housing to go along with the phenomenal workforce and job opportunities,” he said. “I think that we have shown that the capital investment is now rolling in to create those opportunities. Look at the villages of Harris Creek off of Highway 104, the Forest Mill apartment complex off of Hatchet Street. Look at the incredible investment being made downtown with apartments. I think that we continue to see the forward funds deployed in a way that incentivizes growth where we want it to happen. I think residential growth will happen.”

Ferguson went on to explain he believes public funding of projects around the city is vital to attracting private investment.

“I think that this community wants to see its core redeveloped and the standard of living and the opportunities increase for every single person in this community,” he said. “We do that through strategic public investments. Where ever we have made strategic public investments, the private sector has come in and dwarfed that investment with private investment, whether it was the streetscaping downtown, the infrastructure associated with our industrial growth, and just recently with our recreation department.”

Williams, when asked the same question, agreed with Ferguson that the city’s growth needs to be planned and well thought out.

“It needs to be strategic, it needs to be managed,” she said. “If you talk to old people in this community, they don’t really want things to change much at all in terms of the number of people that are here, but I think we are delusional if we think that we can become the community with the amenities that attract people if we don’t do some things that make ourselves look better.”

She also said that if the city wants to grow, it needs to focus on beautification of certain trouble spots.

“First of all the streets in the city need to look better,” she said. “I can walk outside my house, and there is grass growing up through the asphalt. The sidewalks need work. The bridge needs pressure washing. There are some things that we could to to just up the ante, do a face-lift on the appearance of the city.”

Both candidates agreed that creating zoning ordinances that would force residential developers to include low-income housing in planned new redevelopments wouldn’t be the answer to West Point’s housing needs.

“In a city the size of West Point, about four and a half square miles, I think it’s not applicable to our size,” Williams said. “I think in large cities, certainly, it’s a very doable, workable thing to do. In West Point, I don’t think it would be popular among the residents and I don’t think successful. First of all, you’re going to be hard pressed to get developers to come into an area like ours and agree to do that. They’re looking at how much the property is going to sell for, what they’re going to be able to get in terms of return on investment, and this community is not going to be appealing.”

“I agree with Deedee, that is not the right approach to take,” he said. “I do however believe that our zoning and planning and the way that we’ve structured our redevelopment plan provides ample opportunity for diversity of housing and that’s something that we’ve already seen. We are seeing market-rate housing and we have seen tax-credit projects that really give our citizens a phenomenal opportunity to succeed. So I think that the goal of having diverse housing can be accomplished, but it is done through proper community planning, it is done through our planning and zoning board, and with the adoption of those policies in theory and with the financial backing of the council.”

The growth of West Point’s Point University campus was also a topic of discussion, with both candidates asked what they could do as mayor to encourage graduates to stay in West Point and become residents.

Williams agreed with her opponent.

“I think jobs and housing is the key,” she said. “Those are the two primary things. When you come out of college, you’re looking for where you’re going to live and earn a living and do the things that are important when you’re that age.”

Following the debate, the two candidates mingled with the nearly 100 attendees at the New Horizon Theatre in downtown West Point.

Standing toward the rear of the auditorium, Josephine Shirley, a resident of neighboring Lanett, Alabama, said the forum, which was hosted by the LaGrange-Troup County Chamber of Commerce, was engaging and informative. She won’t be able to vote for either candidates because of where she lives, but that’s something she’s glad for.

“Both of these people are very competent, they’re very educated,” she said. “I’d hate to be over here and have to pick one or the other. I think Drew has done a fabulous job for the city and Deedee is extremely smart, she used to work with me. … It surprised me how the forum was handled. I just thought it was done very well, and it was very professional.”

Shirley has her opinion about who will win, but either way she thinks the city will win.