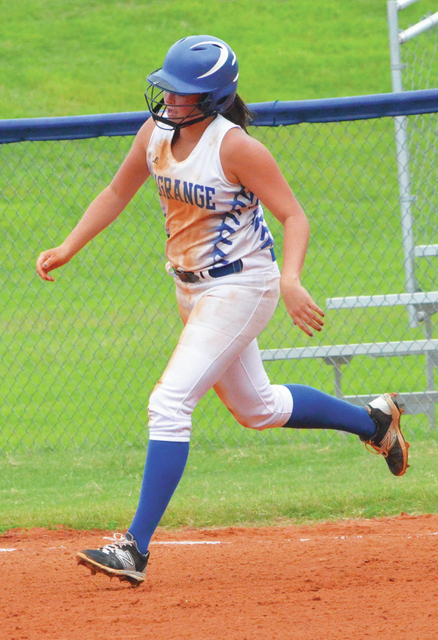 COLUMBUS – The LaGrange Lady Grangers need one more win to make sure they’ll still be playing when the state tournament gets under way next week.

After splitting a pair of games in the Region 1-AAAAA softball tournament on Wednesday, LaGrange will be back in Columbus today as it looks to sew up a state bid.

The Lady Grangers will play Carver at 4 p.m. today, and if they win that game, they would be assured of finishing fourth or higher in the region, and that would secure a spot in the state tournament.

If LaGrange beats Carver, it would play either Columbus and Hardaway later in the day.

On Wednesday, LaGrange began its tournament stay with a 15-3 win over Hardaway before losing to Northside 12-0.

Against Hardaway, LaGrange pounded out 11 hits in a game that ended after five innings because of the run rule

One of those hits was Lauren Kuerzi’s seventh home run of the season, and she finished with two hits, five RBIs and three runs scored.

Destiny Fitzpatrick had three hits and an RBI, and senior Leighton Parker had two hits, including a double, and one RBI.

Shaq Sutton, McLain Skinner, Miranda Hamer and Kedaysha Griffin each had one hit, and Hannah Karcher, Sutton, Skinner and Hamer each had RBIs.

Skinner was the starting pitcher for LaGrange, and she gave up four hits and just one earned run while striking out four.

In Wednesday’s second game, Northside hit a three-run home run in the fifth inning to push the lead to 6-0, and it scored six more runs in the sixth inning to end it.

Kelsey Lewis had a first-half goal for the Panthers, and it turns out that’s all they needed.

Wesleyan only had one shot on goal, and freshman keeper Saige Macleay made the save for the Panthers.