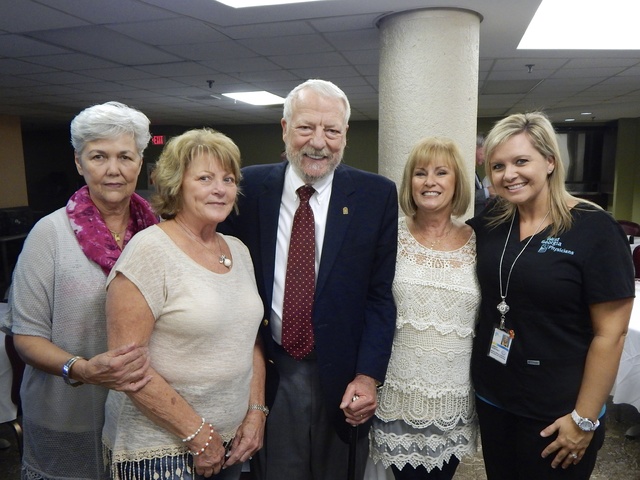 Dr. Bob Copeland hugs Juanita Reid Maney, LPN, who attended Copeland’s retirement reception, worked in the Intensive Care Unit at what was then known as City-County Hospital in LaGrange and remembers his first day on the job. Copeland retired as a cardiologist from West Georgia CardioPulmonary after 48 years, but will stay as medical director of the West Georgia Heart Clinic.

http://lagrangenews.com/wp-content/uploads/sites/37/2015/10/web1_WEB1011copeland01.jpgDr. Bob Copeland hugs Juanita Reid Maney, LPN, who attended Copeland’s retirement reception, worked in the Intensive Care Unit at what was then known as City-County Hospital in LaGrange and remembers his first day on the job. Copeland retired as a cardiologist from West Georgia CardioPulmonary after 48 years, but will stay as medical director of the West Georgia Heart Clinic. Dr. Bob Copeland with his nurses through the years: from left, Bernice Griffith, Susie Poole, Vicki Utley and Candy Godfrey.

http://lagrangenews.com/wp-content/uploads/sites/37/2015/10/web1_WEB1011copeland02.jpgDr. Bob Copeland with his nurses through the years: from left, Bernice Griffith, Susie Poole, Vicki Utley and Candy Godfrey.

LaGRANGE — Dr. Robert “Bob” Copeland, whose name is synonymous with cardiac care in LaGrange and surrounding communities, has retired from West Georgia CardioPulmonary after serving patients for the last 48 years.

The cardiologist has specialized in the treatment of heart attack and coronary artery disease, cardiomyopathy, congestive heart failure, and disordered heart rate and rhythm. He will continue to serve as medical director of the West Georgia Heart Clinic.

“What a wonderful ride this has been,” he said at a surprise retirement reception at West Georgia Health. “I look around this room, and I can hardly believe the wonderful support and friendships all in one place.

“I’ve always thought that being a physician is a great privilege, and I still say that it is such a privilege to work with patients, doctors, nurses, everyone.”

Copeland began practicing medicine in LaGrange in October 1967 after completing his residency and fellowship at Harvard University and Massachusetts General Hospital in Boston. He had previously graduated with honors from the Medical College of the University of Alabama in Birmingham.

Juanita Reid Maney, LPN, who attended his reception, worked in the Intensive Care Unit at what was then known as City-County Hospital in LaGrange and remembers Copeland’s first day on the job.

“From the first day he came, he was always just so wonderful to us nurses,” she said. “I remember we had six beds in the ICU, and if we ever had concerns, we could call him any time of night and he would come.”

He later became her late husband’s physician, and she said he “always came to her family’s rescue” just as he did for the nurses.

Copeland was instrumental in developing the Georgia Heart Clinic in 1972, bringing state-of-the-art facilities to the west Georgia and east Alabama area. Under his continued guidance, the new West Georgia Heart Clinic, located in the hospital’s South Tower, provides more space, new facilities and advanced treatment including interventional cardiology for patients with heart attacks and others who need stents.

Known by hundreds of patients for his professionalism, dedication and compassionate care, he also leaves a legacy of mentoring and encouraging others to go into the medical profession if he saw potential in them.

“When I was young, I got a job as a phlebotomist at the hospital,” said Teaver, who began working at WGH in 1977. “On my first day, Copeland said, ‘You need to go into nursing, and there’s a scholarship available for it.’”

With his additional encouragement, she applied to LaGrange College and received the Sims Scholarship. She graduated in 1981 with a perfect 4.0 grade point average.

“I worked really hard because I was so worried I would lose the scholarship and not be able to continue going to college,” she said.

Teaver began her career as a nurse in the progressive care unit. She later became a nurse in the heart clinic and then nurse manager of cardiovascular services. In 2006 she was the recipient of the Mary Lynn Faress Award for Distinguished Service in nursing.

“Copeland has had such a big impact on my life,” she said. “He looks for people with potential and helps steer them where they need to go. He’s left a huge wake of people like me who he has encouraged and mentored. It is his legacy, and he should be so proud of that.”

“Early in my career, I would be on call during the weekends taking care of his patients,” Simmons said, smiling. “I learned very quickly that they had a doctor who they considered to be the gold standard, and I wasn’t it.”

Copeland has worked very closely with Dr. Martha Clements and Dr. Mack Clements at their Greenville and Pine Mountain offices through his 48 years of practicing medicine.

“I also remember early on when I talked on the phone to Dr. Martha Clements, and I asked, ‘Martha, what can I do to help you?’” Simmons said. “She said, ‘If you respond half as good as Bob Copeland, you’ll be all right.’”

Dr. Tom Gore said Copeland and his wife, Jenny, invited him to their house when he was in high school because he had told Copeland about his interest in becoming a doctor.

“They were just so nice and treated me like an adult,” Gore said. “He even took me to the hospital to show me around and then to (then CEO) Charlie Foster’s house to introduce me to him. I then worked as an orderly early on at the hospital, around 1972 or 1973.”

Gore said Copeland helped guide him through the ins and outs of getting into medical school.

“He helped me try to get into Harvard, but unfortunately, I was not able to fulfill his dream for me,” he said, smiling. “He is wonderful about helping people look into the future and see who they can become.”

Gore and Copeland later founded the Troup Cares Clinic, a free medical clinic that ensures that the uninsured and working poor in the community will have their health care needs met. The clinic sees around 100 patients a month who otherwise would not have access to primary or specialty care because of limited or no income.

Gina Daniel, who began working in WGH’s Heart Clinic 27 years ago, said Copeland has been a great teacher and mentor.

“There are not enough words to express my feelings of loyalty, love, appreciation and admiration of Copeland,” she said. “Starting here in the Heart Clinic as a young 19-year-old girl in 1988, he and the late Joe Calhoun played a major role in ‘helping raise me.’ They expected the best and accepted no less.”

Daniel said she could write a book of all Copeland has done under the radar for patients, staff and colleagues through the years.

“I couldn’t even begin to count the letters of recommendations and phone calls he has made to help young people get into nursing programs, medical schools and other health care-related programs,” Daniel said. “If Copeland ever does that for someone, it’s because he believes in you. He sees potential. That is a true compliment.”

Daniel said that “to me, the Heart Clinic and Copeland are synonymous.”