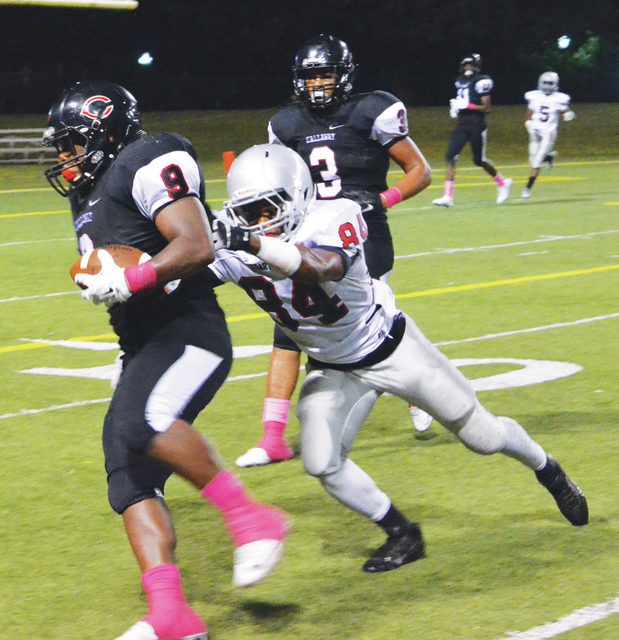 LAGRANGE – The outcome was still somewhat in doubt.

The Callaway Cavaliers dominated the first half and were on top of Cedartown 22-3 on Thursday night at Callaway Stadium, but the lead wasn’t large enough that they could feel entirely comfortable.

Callaway was also facing the prospect of taking the field for the second half without two of its top players.

Quarterback Braylon Sanders was out with a knee injury, the severity of which will be determined today, as well as standout running back Cedric Maynard, who was dealing with an illness.

Any possibility the visiting Bulldogs had of making a comeback was quickly squashed, though.

In a span of less than six minutes at the start of the second half, the Cavaliers scored three touchdowns, turning a somewhat competitive game into a blowout.

After Tyrek Frazier notched his third rushing touchdown of the night, the Cavaliers had a 43-3 lead, and they went on to claim a 43-17 victory.

It was the fifth win in a row for the Cavaliers (5-1 overall), who got their Region 5-AAA schedule started in impressive fashion.

Frazier, a senior defensive back and running back, said the players came out of the locker room for the second half with an aggressive mindset.

“We had to set the tone,” Frazier said. “We had to put the nails in the coffin. That’s what coach (Pete) Wiggins always teaches us. The game’s not over until it’s all zeroes in the fourth quarter.”

The Cavaliers, who were off last week, dominated the game in every area.

The offense moved the ball with ease, whether it was Sanders or Dylan Johnson at quarterback, or Maynard or Frazier lining up in the backfield.

Callaway’s defense got it done as well.

Callaway’s starting defense only gave up three points, with Cedartown scoring a pair of fourth-quarter touchdowns against the reserves.

Wiggins said he had plenty of respect for Cedartown, despite its 0-5 record coming into the game.

“Cedartown’s got a young football team,” Wiggins said. “Coach (Scott) Hendrix does a great job. They were big and physical. I’m proud of our guys for maintaining their focus and the way they played throughout the night.”

It was a big night for Frazier, who did his usual stellar work on defense while also finding the end zone three times from his running-back position.

Frazier capped the first-half scoring with a 3-yard touchdown run, and he added scoring runs of 12 and 35 yards in the second half.

Maynard, who only played the first half but still had well in excess of 100 yards, had a 12-yard scoring run, as well as a 23-yard touchdown catch from Sanders.

Maynard also had a 70-yard run that set up Frazier’s first touchdown.

Frazier was feeling sick at halftime, and he was unable to return for the second half.

While for a lot of teams that would be a big blow since Maynard is having a phenomenal senior season, Frazier is an immensely talented running back in his own right, and he has produced whenever called upon.

Frazier said he was ready to go when he learned Maynard wouldn’t be playing in the second half.

“You’ve got to be ready every time you step on the field,” Frazier said. “They gave me an opportunity. They said Cedric was hurt, so I just had to step up for the team, and we got the win.”

Another player who had a productive night was senior Brandon Boddie, who had a 10-yard touchdown run from his fullback position.

Boddie is used mostly as a blocker, but like Frazier, when he gets a chance to carry the football, something positive usually happens.

Boddie had a few other nice runs, as well as a catch that helped set up a Frazier touchdown.

“I get the job done when they need it,” Boddie said.

Callaway’s defense was strong once again, although senior linebacker Javoski Leverette said no one is satisfied.

“We can get better and better,” Leverette said. “We’re trying to get it where we stop them from scoring all together. We just have to keep working to get better.”

Callaway’s defense forced a pair of three-and-outs the first two times Cedartown had the ball.

The Cavaliers’ first offensive possession ended with a lost fumble, but the second time they got the ball they scored a touchdown.

Sanders completed all three of his pass attempts on the drive for 36 yards, and Maynard finished things off with a 12-yard touchdown run on first down.

Dre Martin had two catches for 22 yards on the drive, and tight end Michael Freeman had a 14-yard reception right before Maynard’s touchdown.

Callaway went for two, and Martin completed the conversion pass to Freeman, and it was an 8-0 game with 5:16 to play in the first quarter.

Cedartown put together a nice drive when it got the ball back that ended with a 36-yard field goal, and Callaway’s lead was down to 8-3 early in the second quarter.

It took the Cavaliers just five plays to add to that lead.

On first down, Boddie took a handoff from Sanders and bulldozed ahead for a 22-yard gain.

Later on the drive, Maynard had a 14-yard run, and he followed that up with a 23-yard scoring catch from Sanders, and Noah Stephens made the extra point to push the lead to 15-3 with 7:46 to play in the first half.

Cedartown’s ensuing possession ended with a failed fourth-down play, and Callaway went right back to work.

On third down, Maynard got the ball, and showing off the play-making ability that has allowed to him to run for nearly 1,300 yards in just six games, he beat the Cedartown defense for a 70-yard run all the way to the 3-yard line.

On the next play, Frazier scored his first touchdown, and Stephens banged home the extra point to give Callaway a 22-3 lead, and that was the score at the half.

The Bulldogs unsuccessfully attempted an onside kick at the start of the second half, and the Cavaliers took over at midfield.

With Johnson at quarterback and Frazier at running back, the Cavaliers didn’t slow down.

Four straight runs by Frazier put the ball on the 19-yard line, and Johnson completed a 7-yard pass to Boddie.

On the next play, Frazier scored on a 12-yard run, and Stephens booted the extra point, and Callaway led 29-3 with 9:32 to play in the third quarter.

The Cavaliers got the ball right back on an interception by sophomore Courtney Williams, and on the next play, Boddie scored on a 10-yard run.

Stephens made the extra point, and Callaway’s lead was 36-3 with less than four minutes gone in the third quarter.

After a short Cedartown punt, Callaway had the ball just 35 yards from the end zone.

For the second straight offensive possession, the Cavaliers only needed one play to score.

Frazier’s number was called, and his 35-yard touchdown run followed by a Stephens extra point put Cedartown in a 43-3 hole.

From there, Wiggins began to substitute liberally on both sides of the football.

Cedartown kept fighting and scored a pair of touchdowns in the fourth quarter.

Leverette said it was nice to see the backup players get some playing time.

“It was good for them to get some reps today,” he said. “It was fun watching them.”

Callaway will look to make it two in a row in the region with a road victory over Rockmart next week.