It’s another major challenge for Tigers 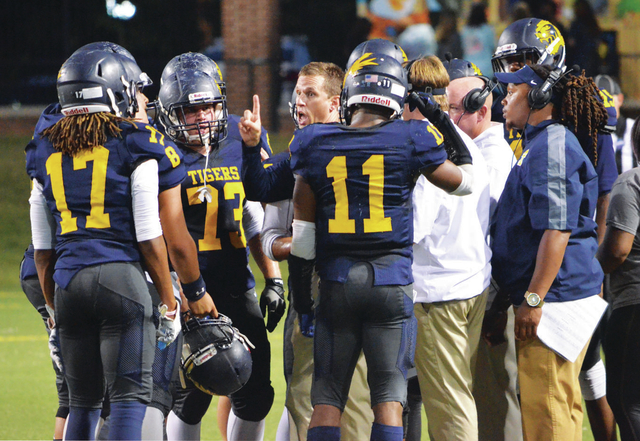 LAGRANGE – Here’s the good news for the Troup Tigers.

When the Woodward Academy War Eagles come to Callaway Stadium tonight, their all-state and University of Georgia-bound running back, Elijah Holyfield, will most likely be on the sidelines with an injured foot.

Even without Holyfield, though, Woodward Academy (5-0) is still an immensely talented ballclub, and it will look to keep its unbeaten season going when it takes on Troup in the Region 5-AAAA opener for both teams.

“They went to the (state) semifinals last year, and they’re every bit as good as last year, if not better,” Troup head coach Tanner Glisson said. “They’ve got a chance to win it all.”

Today’s game is the start of a challenging three-game stretch for Troup.

After today’s game, Troup will play traditional powerhouse Sandy Creek the following week before taking on Carrollton the week after that.

Woodward Academy and Sandy Creek are a combined 9-1, and while Carrollton is only 2-3, it has played a brutal schedule.

First up will be a Woodward Academy team that is 5-0 and has been getting it done in all phases of the game.

“They’re a tremendous program,” Glisson said. “They have a lot of respect, especially in the coaching ranks. They’re very explosive, very well-coached.”

While the War Eagles have done nothing but win, the Tigers are still looking for their breakthrough victory.

Troup (0-5) did take some encouragement from its second-half performance against Callaway in a 42-24 loss on Sept. 25.

Trailing 35-3 at the half, Troup outscored Callaway 21-7 in the final two quarters.

Before the Callaway game, the Tigers hadn’t scored more than 14 points in a game, and they surpassed that total in the second half alone.

Troup’s defense forced a pair of turnovers in the second half against Callaway and only gave up one touchdown.

While the Tigers did take some positives out of that game, it was still another loss for a team desperate to put one in the win column.

“We were hoping for better outcomes,” said Glisson, who was hired in May and didn’t begin working with the players until the summer program got under way in June.

Glisson said that no one is hanging their heads, though.

“They’re resilient,” Glisson said. “Every Friday night is an opportunity to learn something about our kids, and for them to learn as well.”

While Troup didn’t play a game last week, Glisson said there was no dialing things back.

Considering where the program is at the moment, Glisson decided the team would be well-served by having a physical week of practice during the off week.