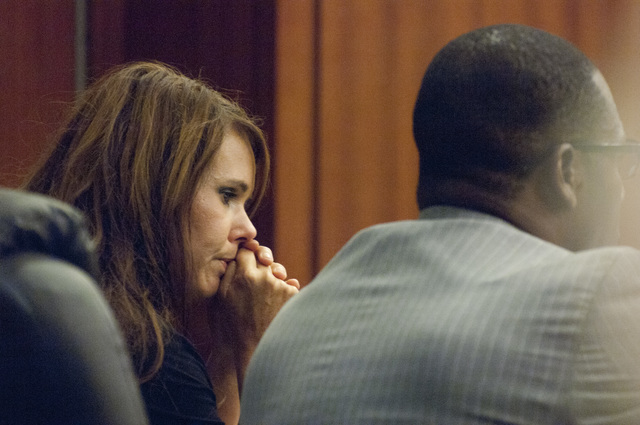 Dana Owens, 39, hears a jury’s guilty verdict in her arson trial in Troup County Superior Court on Aug. 21. Owens was denied bond Thursday during an appeal of her conviction of trying in 2013 to burn down her West Point home for a $1.5 million insurance policy.

http://lagrangenews.com/wp-content/uploads/sites/37/2015/10/web1_WEB1009ArsonFilePhoto1.jpgDana Owens, 39, hears a jury’s guilty verdict in her arson trial in Troup County Superior Court on Aug. 21. Owens was denied bond Thursday during an appeal of her conviction of trying in 2013 to burn down her West Point home for a $1.5 million insurance policy.

LaGRANGE — A woman convicted in August of arson was back in Troup County Superior Court on Thursday asking to be released from jail while her attorney files an appeal.

Dana Owens, 39, formerly of West Point, is asking for a new trial after being sentenced to 12 years in prison for two counts of arson. In motions filed with the clerk of the court, Owens’ attorney, Columbus-based Stacey Jackson, said the evidence in the trial was not sufficient to warrant a conviction, according to filings.

Presiding Judge Travis Sakrison denied her motion to be released from confinement pending the appeals hearing.

LaGrange attorney Ken Gordon represented Owens during the bond hearing and submitted more than 100 affidavits by friends and family members who said they thought Owens did not pose a flight risk, would not intimidate witnesses or commit any felonies if released.

“Arson is a crime of fraud, your honor,” Himes said to Sakrison. “It’s a crime of deceit and she’s been untruthful to investigators, to this court and in front of jurors. She clearly doesn’t accept that there’s a punishment that goes with the verdict.”

Although five people testified on Owens’ behalf, it may have been her own words that did her in.

In recorded jail-house telephone calls played in court, Owens asks her father to go directly to the judge, and ask him for leniency.

“When I was going through my divorce, I went and saw (Superior Court Chief) Judge (A. Quillian) Baldwin personally,” she said. “It helped me so much. Ken (Gordon) will tell you not to do it, but if you can just talk to him, he’s a human being, he’ll understand,” she said.

Sakrison rubbed his eyes and furrowed his brow as he listened to the conversation, looking directly at Owens who sat quietly next to her lawyer, wearing a white-and-black stripped jail jumpsuit with her legs shackled and hands cuffed.

Approaching a judge directly in such a manner that Owens appeared to be suggesting is unacceptable behavior, Himes said.

“She has shown clearly that she’s willing to interfere with the administration of justice,” Himes said.

Himes also worried Owens was a flight risk, because of her significant financial ability and statements she made to friends and family in emails she apparently wrote from jail.

In one conversation with her boyfriend, she asked him to renew her passport, which expires in 2016, Himes told the court. She was “thinking of going to Italy in the spring,” Himes said Owens wrote to the man.

In another email to a different friend, Owens also mentions a European vacation. At one point, her father tried to convince her to turn her passport in as part of a bond deal, but she refused, according to Himes.

Leg monitoring was also out of the question for Owens, according to statements she made to friends and family.

“I promise I would cut it off,” she wrote in one email to a friend. “I will not even let them attempt to put one on. I deserve to move on with my life, they have already taken away so many years. … I will not, not, not, not wear one.”

Himes said allowing Owens to be released would be unacceptable.

Still, Owens seemed confident before the hearing that she would be released on bond. She scheduled a nail and hair appointment for today, according to emails she sent from jail.

Before denying bond for Owens, Sakrison spoke frankly from the bench.

“At the end of the day, it appears Mrs. Owens is her own worst enemy with some of those statements,” he said, referring to her recorded calls and emails. “She’s facing significant jail time, so I’m going to deny this motion for bond.”