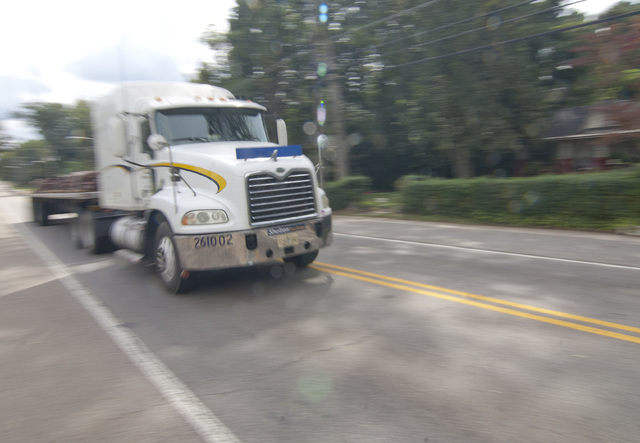 A tractor-trailer passes in front of Sandra Johnson’s home in the 1400 block of Hamilton Road on Friday. Johnson, along with 36 other homeowners and 27 businesses, will be displaced when the Georgia Department of Transportation begins widening Hamilton Road in the coming years.

http://lagrangenews.com/wp-content/uploads/sites/37/2015/10/web1_1011HamiltonRoad.jpgA tractor-trailer passes in front of Sandra Johnson’s home in the 1400 block of Hamilton Road on Friday. Johnson, along with 36 other homeowners and 27 businesses, will be displaced when the Georgia Department of Transportation begins widening Hamilton Road in the coming years.

LaGRANGE — “What Happens When Your Property is Needed for a Transportation Facility” isn’t exactly the kind of pamphlet most people want to have to pick up, but it will likely be one of the first things Sandra Johnson of Hamilton Road grabs when she goes to an open house regarding the widening of the road she’s lived on for more than 30 years.

Johnson lives in one of 37 residences that the Georgia Department of Transportation plans to purchase — along with 27 business locations — in the next couple of years as part of a project to add three lanes to Hamilton Road from its intersection at Morgan Street to Auburn Avenue near Lukken Industrial Drive.

At GDOT’s open house, which is scheduled for Tuesday from 4 to 6 p.m. at the Mike Daniel Recreation Center on Lafayette Parkway, officials plan to show attendees renderings of what the project will look like and who will be affected. The meeting is free, open to the public and GDOT encourages residents to come.

Hoping to find answers to some of her questions, Johnson said she plans to attend the meeting; she’s also hoping she’ll be treated with respect as the state acquires her property.

“I want them to do right,” she said. “I want them to give us a fair price for the property and help to relocate. I hope they’ll be fair about it to everybody.”

Kevin VanHouten, GDOT’s director of the Hamilton Road project, said it could take between two and three years to acquire all the property. He’s expecting it to cost about $19 million just to purchase the 64 properties and an additional $9.5 million to widen the road. The construction will begin after the acquisition of the properties and would likely take about two more years. The state is yet to determine the funding source of the project, he added.

Once it’s all said and done, Hamilton Road will look very different, based on GDOT’s concept drawings that will be shown at the open house.

The project begins on Main Street in front of the Habitat for Humanity ReStore. Two properties across the street from the ReStore will be acquired by the state and the road will continue to the intersection of Morgan Street and Hamilton Road. The signal at that intersection will be replaced and two lanes will carry traffic on the west side, closest to the Speedy Serve gas station. Three lanes — a left turn, a right turn and a forward lane — will carry traffic in the opposite direction, coming from Hamilton Road toward Morgan Street. Eleven properties on the east side of the road headed toward the Morgan Street and Hamilton Road intersection will be acquired.

As motorists continue on Hamilton Road toward Troup High School, the road will remain two lanes in each direction with a turning lane in the center. GDOT plans to acquire the BP Gas station at the intersection of Hamilton Road and Brown Street along with several other properties that sit close the road. Most of the widening will occur on the eastern side of the road, with the exception of Southview Cemetery, where widening will occur on the western side of the road. The project finishes just south of Foster’s Auto Sales near Hamilton Road’s intersection with Auburn Avenue.

For people who may have trouble visualizing the project, GDOT has developed a 3-D video presentation modeling the project and will show it at the open house.

Standing on her front porch Friday, Johnson said she knew the state’s decision to widen the road was coming, and she knew that because her house is across the street from Southview Cemetery, she likely will have to move.

“What can you do?” she said. “I knew they couldn’t get the road in the cemetery. It was understood when they decided that the property is going to have to come from my side. It doesn’t worry me, I’d just say I’m concerned because I have to find somewhere to go.”