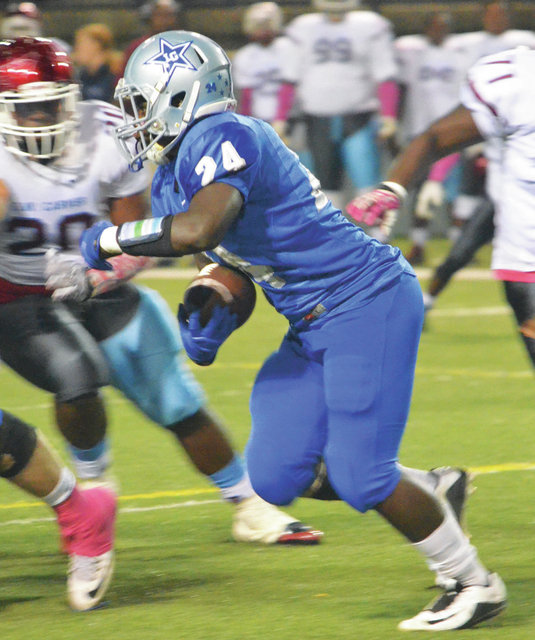 LaGrange quarterback LaPerion Perry looks for running room during the second half of Saturday’s game against Carver. Perry ran for two touchdowns and threw for two more in the 51-50 loss. Kevin Eckleberry | Daily News

http://lagrangenews.com/wp-content/uploads/sites/37/2015/10/web1_10-12-LHS14.jpgLaGrange quarterback LaPerion Perry looks for running room during the second half of Saturday’s game against Carver. Perry ran for two touchdowns and threw for two more in the 51-50 loss. Kevin Eckleberry | Daily News The LaGrange Grangers put 50 points on the scoreboard during Saturday’s wild, back-and-forth showdown with the Carver Tigers, but it wasn’t enough.

After falling behind 28-0 in the first half, Carver rallied to get within seven by the break, and it held on for a 51-50 victory in an exhilarating Region 1-AAAAA ballgame at Callaway Stadium.

LaGrange made it to the Carver 23-yard line in the game’s closing moments, but a potential game-winning field-goal attempt just missed.

It was a tough loss for the Grangers (3-4 overall), who fell to 0-2 in the region with three region games remaining, while the Tigers (5-1) stayed unbeaten in the region at 2-0.

It was another close loss to a quality team for the Grangers.

In their losses, which have come against a quartet of teams with a combined four losses, the Grangers have lost by a total of 13 points.

While the Grangers have proven they can stand toe-to-toe with elite teams, head coach Dialleo Burks is ready to see his players take the next step.

“How much longer are we going to say we appreciate the effort? You have to see some results,” Burks said. “You’ve got to find a way to pull these games out. We’ve got to find a way. We were up 28-0. And I felt we got comfortable, instead of continuing to do what we were doing.”

The one thing the Grangers did from the beginning of the game to the end was move the football.

Junior quarterback LaPerion Perry, who enjoyed a remarkable night, had a lot to do with the Grangers’ success.

He threw two touchdown passes, he had two scoring runs, and he had more than 400 combined yards.

Wide receiver Andrew Askew also had a special evening with a pair of scoring receptions from Perry, and he also threw two touchdown passes on trick plays.

Mike Hardy was on the receiving end of Askew’s touchdown passes, and Derieko Smith also had a scoring catch for the Grangers.

Unfortunately for the Grangers, they had a difficult time slowing down quarterback Jawon Pass and the Carver offense.

While one of Carver’s touchdowns came on a recovered fumble on a botched punt attempt, the other six scores came via the offense.

Pass, who has verbally committed to Louisville, had four touchdown passes, and he also had two scoring runs.

The two teams kept trading blows, and in the end, Carver was one point better, but Perry was proud of the way his team competed.

As the game carried into the second quarter, it didn’t look like there was going to be a whole lot of suspense.

When Perry threw a strike to Smith in the end zone for an 18-yard touchdown pass, the Grangers had a 28-0 lead.

It took the Tigers a little more than a minute to drive down the field and score their first touchdown, and the comeback was on.

By the half LaGrange’s lead was down to 28-21, and Carver tied it with a touchdown early in the third quarter.

The scoring was just getting started.

Beginning with a short touchdown pass from Perry to Askew, LaGrange and Carver combined for six touchdowns in the game’s final 16 minutes, and five of those touchdowns came in a breath-taking fourth quarter.

Carver took the lead with 2:52 remaining.

Pass completed a 12-yard touchdown pass to Us Beasley, and the quarterback then kept the ball for the two-point conversion run to give his team a one-point edge.

Perry led the Grangers down the field to set up the field-goal attempt by Matthew Thomas.

The kick had the distance, but it missed just right, a mere inches from the right goal post.

“The guys played hard,” Burks said. “They got big plays. We’ve just got to keep plugging. That’s all you can do.”

The Grangers’ first possession of the game ended with an interception, but when they got the ball the second time, they took off, and they never slowed down.

After a Carver punt, the Grangers took over at their own 23-yard line, and they went 77 yards in 11 plays for the touchdown.

Perry was 5-for-5 for 47 yards on the drive, and that included a 16-yard completion to Smith on the first play.

After Perry kept the ball for an 11-yard gain, he connected with Askew on the next play for a 14-yard touchdown, and Thomas drilled the first of his six extra points to give LaGrange a 7-0 lead.

After another punt, the Grangers only needed four plays to go 74 yards for their second touchdown.

Perry, who ran for nearly 200 yards in the game, finished the quick drive with a 52-yard scoring run down the left sideline, and with 2:20 left in the first quarter, LaGrange led 14-0.

After a punt, the Grangers had the ball at their own 37-yard line, and they only needed one play to score again.

Askew took a lateral from Perry, and instead of running, he heaved the ball downfield toward a wide-open Hardy, who made the catch and raced to the end zone for a 63-yard touchdown.

That was the first of Askew’s two scoring throws, and Carver was caught off-guard both times.

It got worse moments for Carver moments later when it was unable to recover the ball on the ensuing kickoff, and LaGrange recovered at the 31-yard line.

On the first play of the second quarter, Perry threw a dart to Smith in the end zone for a 17-yard touchdown, and LaGrange led 28-0.

It was desperation time for the Tigers, and they responded.

A special-teams miscue by LaGrange led to Carver’s next touchdown.

On an errant snap on a punt attempt, the ball got away, and Carver’s Kobe Hatcher scooped up the ball and went five yards for a touchdown, and just like that LaGrange’s lead was down to 14.

The Grangers came within less than a yard of adding to their lead when they got the ball back.

On the last play of the first half, Perry completed a pass to Smith, and he was brought down inches away from the goal line.

Time ran out in the half, and LaGrange took a 28-21 lead to the locker room.

On its second possession of the second half, Carver pulled even, with Pass tossing a 46-yard scoring pass to Gerald Reid.

Perry set the Grangers up with nice field possession with a kickoff return to the 43-yard line, and nine plays later they were in the end zone.

LaGrange picked up 31 of those yards on a screen pass from Perry to Smith to the Carver 6-yard line.

On third down, Askew caught a pass from Perry about a yard short of the end zone, and he powered his way across the goal line for the touchdown, and LaGrange was back on top 35-28.

Carver’s next possession ended on a failed fourth-down play, but LaGrange gave the ball right back with a lost fumble.

Carver took advantage of that break and pulled even on a 1-yard touchdown run by Pass, and Pass then scored on the two-point run with 11:34 to play to put LaGrange in a 36-35 hole.

That was the first time Grangers trailed in the game, and they responded to that adversity in fine fashion.

The Grangers went 65 yards in three plays, and Perry did almost all of the damage.

Jacobi Cunningham got behind the LaGrange defense and caught a 63-yard touchdown pass from Pass, and Carver was ahead 43-42 with 9:44 to play.

In a span of less than two minutes to the start the fourth quarter, there were three touchdowns scored.

That’s the kind of pace the two offenses were setting.

The Grangers reclaimed the lead by going back to a play they had success with earlier.

Perry threw a backward pass to Askew, and Carver’s defense focused solely on him.

There was no one close to Hardy, whose 60-yard touchdown catch put the Grangers back on top.

With a five-point lead, the Grangers went for two, and Perry completed the conversion pass to Askew, and it was a 50-43 game with 6:10 to play.

Once again, Carver had an answer.

On a fourth-down play, Pass found Beasley for the 12-yard touchdown pass to get the Tigers within one.

With no hesitation, Carver went for two, and Pass crossed the goal line to put his team on top 51-50 with 2:52 remaining.

After LaGrange made it into Carver territory, Smith took a short pass from Perry and turned it into a 24-yard reception to the 20-yard line.

The Grangers picked up one yard on first down, and after Smith was sacked on second down, Kimani Barnes had a 4-yard run to the 22-yard line, setting up the unsuccessful field-goal attempt.

LaGrange is off this week, and it will be on the road against Shaw on Oct. 22.

“We’ll come back and get back to work,” Burks said.