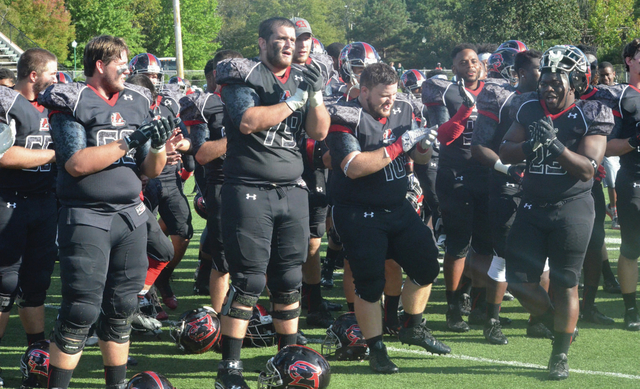 LAGRANGE – This time, it was the LaGrange College Panthers finding a way to pull out a close win.

The Panthers came into Saturday’s home game against Greensboro with an 0-3 record, and they lost those three games by a combined 11 points.

As Saturday’s game wound down, the Panthers once again found themselves involved in a tight one.

Down by just two points, Greensboro had the ball deep in LaGrange College territory when quarterback Mac Graham put up a pass attempt on second-and-long.

LaGrange College defensive back Marcus Valentine saw what was coming, and he got in position to make a potential game-saving play.

“(The receiver) took off on the fly, and I was like, I’ve got a feeling they’re going to throw it to him,” Valentine said. “So I ran with him, looked back, saw the ball, and I thought I’ve got one chance to make a play.”

Valentine jumped up and made the interception, securing LaGrange College’s first victory of the season.

The Panthers ran a couple of plays before the clock ran out, and they were able to celebrate a 27-25 win.

It was a much-needed win not just because of what had happened earlier in the season, but it was the Panthers’ USA South opener.

“We needed to get this one,” Valentine said. “It was our first conference game. It’s a confidence booster. The last three games were really close, and we had to get one. We’re 1-0 in the conference. That’s all that matters.”

As big as the interception was, the play right before that was a critical one as well.

After Greensboro had moved the ball fairly easily down the field and had first down at the LaGrange College 25-yard line, Demetrius Rodgers came through with a sack on first down, creating the second-and-long situation.

On the next play, an obvious passing down, Valentine got the pick.

“We had to make a play,” Rodgers said. “There was nothing else to do. We had to come out here and make it happen, and I’m glad I could be the one to do it. I love my teammates, I love my program, I love what we’re doing out here.”

“They needed it,” Mumme said. “Now hopefully we’ll stay hungry and keep moving forward. It was a good win.”

Sophomore quarterback Connor Blair continued to enjoy a productive sophomore season by completing 28-of-45 passes for 297 yards with a pair of touchdowns and no interceptions.

Marsalis Jackson caught six of Blair’s passes for 109 yards, and he had a pair of 21-yard touchdown receptions.

With 19 career touchdown catches, Jackson is now the program’s career record holder in that category, surpassing Griffin Roelle, who has 17 scoring receptions.

LaGrange College also got a 5-yard touchdown run from Jamarkis Holmes, and Zack Kudwa made a pair of field goals.

In the first half, it was all LaGrange College.

In the first quarter, the Panthers got a 19-yard field goal from Kudwa and the first of Jackson’s two touchdown catches to build a 10-0 lead.

In the second quarter, Kudwa’s 20-yard field goal capped an 11-play, 79-yard drive, and LaGrange College led 13-0, which was the score at the half.

In the second half, Greensboro made a game of it.

A 14-yard scoring pass from Graham to Armani Williams early in the second half cut LaGrange College’s lead to 13-7.

The Panthers answered with a four-play, 65-yard drive that was capped by Jackson’s second touchdown catch, and the lead was 20-7 with 4:27 left in the third quarter.

Early in the fourth quarter, Greensboro got a 2-yard scoring run from Kenneth Purvis, and after a failed extra-point attempt, LaGrange College’s lead was 20-13 with 12:35 to play.

It took the Panthers about two minutes to push that lead back to 14.

Back came Greensboro, with Purvis scoring on a 26-yard run, and after an unsuccessful two-point try, LaGrange College led 27-19 with 8:39 to play.

Greensboro got the ball back moments later on a fumble near midfield, and with 6:20 still left on the clock, Graham’s 10-yard keeper made it a two-point game.

Greensboro again went for two, and Graham’s pass was incomplete, and LaGrange still had the lead.

LaGrange College made it to the Greensboro 36-yard line on its ensuing possession, and Mumme decided to punt the ball rather than attempt to pick up the first down.

Mumme’s first inclination was go for it, much like his father, coach Hal Mumme, likely would have done.

After a chat with defensive coordinator Earl Chambers, though, Mumme opted for the punt.

“We were down here fourth-and-four and you want to be Hal Mumme and go for it,” Mumme said. “But (Chambers) said punt it and let’s play defense, and I said OK.”

Greensboro took over at its own 25-yard line and made it as far as the LaGrange College 25-yard line before the defense saved the day.

LaGrange College will look to make it two in a row in the region when it hosts Huntingdon on Saturday at 6 p.m.