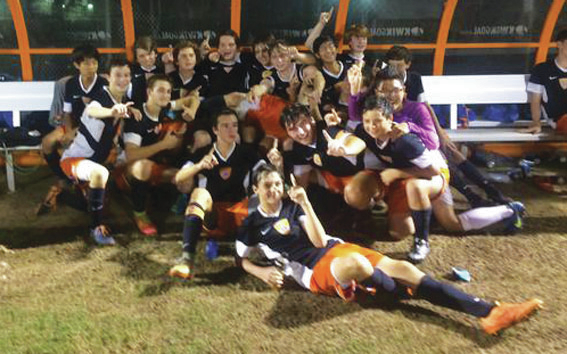 They weren’t coming home without the championship trophy this time.

During the 2013 and 2014 seasons, the LaGrange Academy Warriors reached the state-championship game, only to fall short both times.

On Friday night at Clayton State University, the Warriors were back in the title game of the Georgia Independent Christian Athletic Association state tournament.

In a thrilling, back-and-forth game, it was LaGrange Academy hanging on for a 2-1 victory over Furtah Prep.

The win capped a perfect 3-0 run through the state playoffs for the Warriors, who finished second to Furtah Prep in the region during the regular season.

“This moment is one they’ll remember,” Petite said. “Being able to do it together, they’ll be able to talk about that forever.”

Fifteen minutes into the game, Jake Keeble scored to give his team a 1-0 victory, and he had a lot of help.

On the possession that led to the goal, six players touched the ball before Keeble scored.

It looked like the ball was heading out of play at one point, but Zach Callaghan tracked it down and made the pass to Keeble, who got it past the goal keeper.

It remained a 1-0 game until, about five minutes before halftime, a Furtah Prep player scored to even things up.

In the second half, both teams had their chances to notch the go-ahead goal, but with a few minutes left in the game, it was still tied at 1-1.

Finally, with less than two minutes to play, the Warriors broke through.

Callaghan had the ball, and he passed it to an open space in the field, hoping a teammate would get there first.

Will Trotter did get to the ball before anyone else, and he hammered the ball into the top right corner of the net, giving the Warriors a 2-1 lead with 90 seconds to play.

With moments left in the game, a Furtah player got a shot away, and the ball hit the cross bar and clanked harmlessly away, and time ran out.

The Warriors had the win, and the state championship.

“It was a tremendous game,” Petite said. “It was one of those games where it was too bad someone lost. It was a great championship game.”

Petite was obviously happy it was his team that left with the big trophy.

“We’ve been too close, too often,” he said. “We finally did it. It was a great game, a great accomplishment for the boys.”

Petite said the defense was terrific all night, and that goal keeper Evan Smith “had a phenomenal night. He didn’t have to do a ton of stuff, but what he did it was clean.”

Petite said the quality of soccer was extremely high on both sides.

“It was a complete back-and-forth affair,” Petite said. “It was one of the fastest soccer games I’ve seen. It was a hard-fought, well-contested game.”