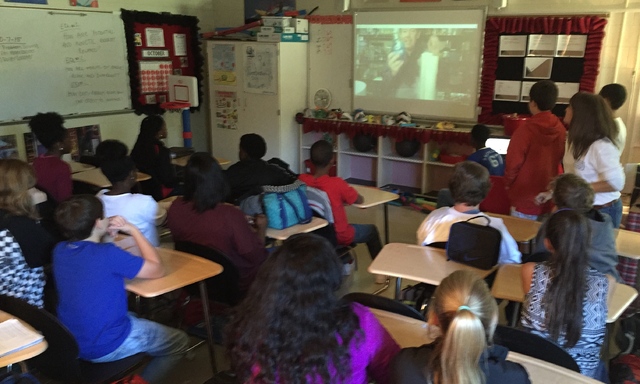 Ms. Bulloch’s science class crowds around a computer to talk to Steve Spangler via Google Hangouts.

http://lagrangenews.com/wp-content/uploads/sites/37/2015/10/web1_WEB101915GNMSSteveSpangler-21.jpgMs. Bulloch’s science class crowds around a computer to talk to Steve Spangler via Google Hangouts. Steve Spangler is a scientist that has been featured on network TV shows like The Ellen DeGeneres Show to show off his zany science experiments.

Spangler showed students from Stacie Bulloch, Paul Stodgie and Thomas Smallwood’s classes how to make slime and how to use dry ice with dishwashing liquid to make foaming clouds and what happens when seltzer tablets and water are mixed in a film canister.

He also showed off the magic of science by opening a book to a page on fire and closing the book without any paper burning which induced “woahs” from the students.

“These kids are totally cool and terribly respectful,” Spangler said.

Spangler explained how roller coasters work, how he prepares from talk shows like Good Morning America, how much he travels the county and about his educational background.

Bulloch said she followed Spangler on social media for years. She recently reached out to him on Twitter, asking if he would do the video chat. Spangler agreed.

“Having someone who is famous and known meet with us through Google Hangout gets the kids excited about learning,” Bulloch said. “It helps my teaching by the students being so engaged in what he has to say and watching his experiments. It reinforces all that they have been learning in class. Google Hangout offers unique ways to engage students and reach them on a familiar level.”

The students used Google Hang-Out, and other technology for the live video chat.

Students will cut a square in the bottom of a cup, put dry ice in it and cover the top with plastic wrap with a rubber band. Spangler wants the students to report if the dry ice fog comes out in squares instead of squares. When the cup is turned upside down. Spangler asked the students to record the experiment and send it to them.

Spangler said his dad was a chemist and magician, which sparked his interest in science. He attend the University of Colorado Boulder for undergraduate studies, majoring in chemistry. He later went to graduate school for his teaching degree.