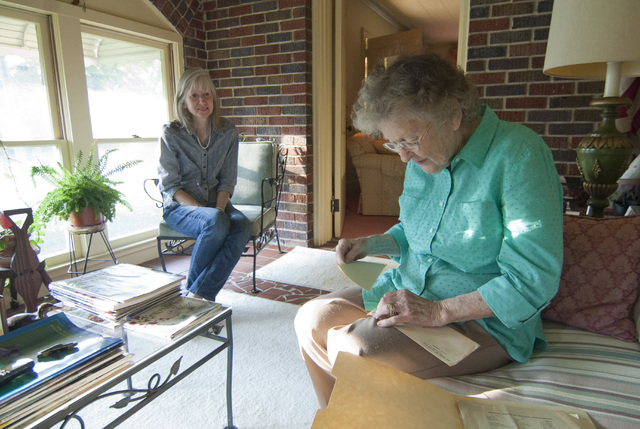 Camilla Myhand, right, widow of LaGrange funeral home cofounder Curtis Myhand, looks through a letter her husband received during his Naval service in World War II while she sits in her College Street home’s sun porch with her daughter, Claire Batchelor. Curtis Myhand died Sunday at the age of 91.

http://lagrangenews.com/wp-content/uploads/sites/37/2015/10/web1_MyhandRembrance.jpgCamilla Myhand, right, widow of LaGrange funeral home cofounder Curtis Myhand, looks through a letter her husband received during his Naval service in World War II while she sits in her College Street home’s sun porch with her daughter, Claire Batchelor. Curtis Myhand died Sunday at the age of 91.

LaGRANGE — Perhaps the only thing Curtis Myhand loved more than his job was family. On Monday, he died surrounded by them at his home on College Street. He was 91.

As one of three founding partners of Hunter-Allen-Myhand Funeral Home on Hill Street, Myhand impacted thousands of lives over several decades helping bereaved families navigate the process of the final goodbye.

Thumbing through letters and documents Curtis Myhand received during his time as a Navy yeoman during World War II, his widow, Camilla Myhand, and daughter, Claire Batchelor, fondly recalled on Monday his dedication to his family — even when his duty called.

“He did not know what he wanted to do exactly when he came back from the Navy,” she said. “He did several different jobs, but then he just got involved in the funeral home. He was drawn from the beginning. He worked for a while and then went to mortuary school, and when he graduated from there, that’s when he met my mother and they got married.”

Camilla Myhand remembers clearly the day she met her future husband. She was working as a nurse at what was then called City-County Hospital on Vernon Road and Curtis Myhand, as a funeral director, stopped by often.

A mutual friend, speaking of Camilla, told Curtis, “You better meet that little girl,” Camilla said. “I remember it as if it was yesterday. It was soon after that, we started dating, and all I can say is it went from there. We had a lot in common.”

The two were together for 64 years until Curtis’ death Monday.

“He never did look at anybody else, and I didn’t either,” Camilla said.

Although a busy man, Curtis Myhand, found time to be a devoted husband and watch his two daughters, Claire and Ellen, grow up in LaGrange.

For a few years during her childhood, her father ran an ambulance service in addition to the funeral service, Claire said. She smiled Monday recalling her father driving the ambulance to their College Street home one morning before she had to leave for school.

“When I was little, I went to Unity School, which is just a few blocks from here,” she said. “My dad came home from an ambulance call, and he took me to school in the ambulance, and I just thought it was the coolest thing. I was probably 6.”

Claire said her father wasn’t always available to make it to PTA meetings and social activities, but she understood what her father was doing as a funeral director was important.

“I’m very proud of my dad, but it was a lifestyle,” she said. “He would do his best to get to things we were involved in, but we as his family understood that he was here to serve. It was a ministry, not a job, and he took it very seriously. We all did.”

There may have been times that her father made it to her after-school activities and Claire never knew it, though, Camilla Myhand said.

“When they (the girls) were little, if they were in a recital or something special like that and he was busy and couldn’t come, he would stand in the back of the auditorium,” she said, holding back tears. “And he would leave after they were done.”

That love and devotion for his family continued through future generations. Curtis Myhand’s grandson, 15-year-old John Reed Batchelor, recalled his grandfather as a generous man who encouraged his boyhood interests.

“I always remembered him as always wanting to spend time with him,” John Reed Batchelor said. “When I was 5 or 6, I was really into pocket knives and he always had a lot of pocket knives. He gave me my first pocket knife.

“I remember I came over one day, I think they were babysitting me,” he said. “I saw an Old Timer (pocket knife) sitting in a box on his desk, and I asked him, ‘who’s is that?’ He said, ‘It’s yours, but you’ll get it when you turn 7.’”

John Reed Batchelor also recalled his grandfather’s connection with the community he served, noting how gregarious and well liked he was by the community.

“I remember we would go to an event, or even just the grocery store and a five minute trip would turn into a 45 minute trip just from talking to everybody,” he said. “Everybody knew him.”

On Monday following a city council forum downtown, LaGrange Mayor Jim Thornton paused among the crowd of people shaking hands and smiling to reflect on the impact Curtis Myhand made on the community.

“Mr. Myhand was one of the kindest men I ever knew,” the mayor said. “He was an institution in LaGrange for decades and my thoughts go out to him and his family.”

“He was a man of integrity, a Godly man,” she said. “If he was going to do it, he was going to do it correctly. He was honest and very generous. Whether he met someone (on a death call) at 3 o’clock in the afternoon or 3 in the morning, he was there for them. He was a great man because he served a great God.”