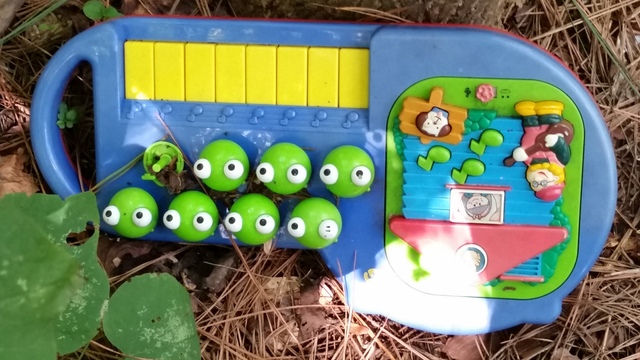 LaGrange police code enforcement officers said donations left after hours behind the Goodwill store on Commerce Avenue have been taken and rummaged through by a group of homeless people who lived in the woods behind the building. What folks did not want was left behind to rot and pile up for at least seven months, if not longer, according to the officers.

http://lagrangenews.com/wp-content/uploads/sites/37/2015/10/web1_Donation.jpgLaGrange police code enforcement officers said donations left after hours behind the Goodwill store on Commerce Avenue have been taken and rummaged through by a group of homeless people who lived in the woods behind the building. What folks did not want was left behind to rot and pile up for at least seven months, if not longer, according to the officers. The Daily News found various items rotting and covered with mold in the woods behind the store including children’s toys, clothes, socks, shoes, car seats, electronics, back packs, furniture, cushions, mattresses, blankets, dishes and stuffed animals like this once cuddly teddy bear. Goodwill Industries of the Southern Rivers region out of Columbus, Georgia said their organization was made aware of the situation concerning the LaGrange store after they were issued the notice of violation by code enforcement officers at the end of September. The company, along with the property managers, N3 Real Estate, are complying with city officials and cleaning up the area.

http://lagrangenews.com/wp-content/uploads/sites/37/2015/10/web1_Donation4.jpgGoodwill Industries of the Southern Rivers region out of Columbus, Georgia said their organization was made aware of the situation concerning the LaGrange store after they were issued the notice of violation by code enforcement officers at the end of September. The company, along with the property managers, N3 Real Estate, are complying with city officials and cleaning up the area. LaGRANGE — It was not a pretty sight in the woods behind the Goodwill store on Commerce Avenue.

Normally a place for folks to drop off their gently used donations after hours to help others in need, it has turned into a feeding frenzy by an unknown group of people. Folks, who LaGrange police said may be homeless and once living behind the store, pilfered through the offerings left behind and dragged them back into the woods.

The Daily News was given a tour of the donation dump site towards the end of September, before law enforcement or the city had been notified of the mess. It was not hard to find — just beyond a patch of parking lot, barely past a line of trees started a long trail of trash: big screen TVs, small TVs and home goods littered a hillside.

That was just the beginning.

The string of debris led to a much bigger, open area that was filled with heaping piles of moldy clothing, socks, shoes, stuffed animals, children’s toys, car seats, electronics, back packs, furniture, cushions, mattresses, blankets, dishes and more. That was only the items that could be seen on top of the grass.

Most of the area was overgrown with brush and piled high with leaves and other natural refuse. When some of those mounds of material were moved aside, more clothing and other items could be seen underneath.

Empty cartons of food, cans of soda, old bottles of beer and similar products were also strewn around the site, leading one to believe that patch of land was once a place someone called home.

“You’re talking about all types of household items, not just clothing,” said LaGrange Police Sgt. Johnny Byrd. “So some of those items could be any type of bio-hazard.”

Byrd is head of the code enforcement department within the city of LaGrange. The office consists of one full-time and one part-time officer.

Byrd said the woodland dump sites behind commercial stores such as Goodwill have been an ongoing issue. According to code enforcement officers, the Goodwill on Commerce Avenue was cited in March for a similar problem behind the building.

After the code enforcement officers checked out the wooded area for themselves, Byrd said the officials once again paid another visit to the store.

“We will give Goodwill a notice of violation, give them ample amount of time to get it up and get it cleaned, because it is a lot of stuff,” he explained. “But of course, we also have to have voluntary compliance (from the business).

“We know the origin of where the stuff is coming from,” he continued. “So either Goodwill or the property owners ultimately would be the ones responsible for the clean up. … There has to be some type of responsibility. They need to monitor (donation dumping) or divert it from happening.”

The company was only made aware of the situation at the LaGrange store after it was issued the notice of violation by code enforcement officers at the end of September, said Julie Bennett, director of communications for Goodwill Industries of the Southern Rivers region out of Columbus. She said the organization had no knowledge of the March violation.

“It was news to us that people are stealing donations that people were leaving behind the store after hours,” Bennett told the Daily News by phone. “We didn’t even know (the donations) were there. People were just stealing them.

Bennett also stated none of the Goodwill retail outlets accept mattresses as donations. She said the ones found in the woods behind the building off Commerce Avenue did not come from the local store.

Goodwill spoke with LaGrange city officials who acknowledged there is a homeless problem in the area, Bennett added. She told the Daily News she had not seen the dump site in person. She was emailed some of the photos of the area taken the week the organization was issued its second citation.

“It made me sad,” she said after viewing the pictures. “It made me sad to see people in the community living like that. It seems the solution to the issue may be easier said than done.”

Bennett said Goodwill was determined to be part of the solution and not the problem, as did N3 Real Estate, a Southlake, Texas, firm that handles the shopping complex where the LaGrange store is located.

The Daily News spoke to Jan Davidson, vice president of asset management and leasing property manager that handles the multiplex, including Goodwill.

Davidson by phone also said she had not seen the site in person, but saw pictures of the dump site in the woods behind the store.

She confirmed N3 Real Estate had hired an independent contractor and was footing the bill to clean up the area.

“We want to work with everyone and find a solution,” Davidson said. “We want to be a part of the community and we want to do our part. We do believe in doing the right thing.”

“Everyone is working together to make sure this gets resolved, and that is what is important,” Bennett added.

But not everyone is happy with the way the city and company officials blamed the problem on the entire homeless population.

Jessica David, executive director of the Emmaus Shelter that houses homeless men, women and children, said the issues happening behind the Goodwill store stem from a troublesome few.

“Regular homeless people wouldn’t behave this way,” she said. “Addicts and scrappers are the ones looting … and some of them may also be homeless. The guests of the Emmaus House have responded to every plea to clean up various areas of the city out of the concern for the community’s well-being. … Most of the homeless we shelter need more access to garbage bags, not dumped donations of toys and TVs.”

David said that on several occasions her folks have taken garbage bags and picked up their trash under the bridge off Hogansville Road and in different homeless campsites along Commerce Avenue without being asked.

While a permanent solution to both the homeless and donation dump site issues are still being hashed out, Byrd said the more attainable goal of cleaning up the mounds and piles of debris behind the Goodwill store has already begun.

According Byrd, Goodwill and N3 Real Estate administrators are in regular contact with city officials and code enforcement officers. He said someone has been out there and cleaned parts of the area up within the citation deadline.

Byrd said Goodwill is currently considered to be in compliance with the city codes. But he also cautioned the donation dump site will be an “ongoing matter until we find a good solution for all parties.”

He said code enforcement officers will continue to work with the store and property managers to ensure there can be a voluntary compliance to keep the area clean and so no citations or fines are handed out.

“We’ve got to come up with a better way to have a collection,” Byrd said. “I know it may be inconvenient, but maybe the store needs to put the donation site somewhere else, somewhere it can be monitored. … We have also suggested placing cameras (around the property) and criminal trespassing signs.”

Davidson said N3 is moving forward with some of the recommendations put forth by the code enforcement office and taking proactive measures.

Currently, the Texas firm is in the process of taking bids and will soon install a fence around the property. Davidson stated it will also add “no trespassing” signs to the fence and in places surrounding the wooded area.