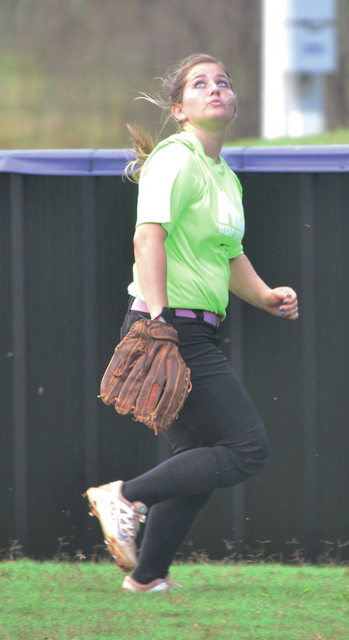 LAGRANGE – She wasn’t able to play at her old field, but Molly Child still had a great time returning to her hometown for a college softball game.

Child, who won a state championship during her senior season at LaGrange Academy, is now a senior softball player at Anderson University (S.C.).

On Saturday, Anderson University and the University of Montevallo (Ala.) were scheduled to play a doubleheader at LaGrange Academy.

After a heavy rain early Saturday morning, though, the field at LaGrange Academy wasn’t going to be ready for use.

Fortunately, the teams were able to use LaGrange High’s field, which was ready to go after some work.

The teams ended up playing two five-inning ballgames, and Child was the starting center fielder for Anderson.

Montevallo also has a local connection.

Parker and Child were both seniors on the 2011 team that captured a state title.

“It was great to be in LaGrange,” Child said. “It brings back a lot of memories.”

It no doubt brought back a lot of good memories.

During her time at LaGrange Academy, Child won a couple of GISA state championships, she was a five-time all-state player, and she was the state’s player of the year as a senior.

By the time she left LaGrange Academy, she’d posted a career batting average of .536 with 32 home runs, and she had a remarkable 54-10 record as a pitcher.

When it came time to choose a college, Child had plenty of options.

She chose Anderson in large part because her sister Abby Child, who was also a star player at LaGrange Academy, was already a member of that program.

The two sisters were able to play together for two seasons at Anderson.

“I always looked up to her and her leadership,” Molly Child said. “It made choosing Anderson the best decision ever.”

Abby Child had a remarkable four-year career at Anderson, and Molly Child has followed suit.

Molly Child has started every game the previous three seasons, and unless there’s an injury, she’ll be on the field for every game next spring.

Child has been knocking the cover off the ball since her freshman season, and among the many honors she has accumulated are three consecutive selections to the all-South Atlantic Conference team.

She has been one of the conference’s best hitters for three straight seasons, and she’s also been an exceptional defensive player with just one career error.

She’s hoping to make the most of her final season.

Anderson, which has won three straight conference titles, will enter a new season with lofty expectations with nearly everyone returning.

“I’m really excited. I can’t wait for it to start,” Child said. “This was our last fall game, so we have conditioning and stuff starting next week. We’re ready.”

During Saturday’s doubleheader, Child had a big cheering section with friends, family members, and former coaches there for support.

“Being so far away in South Carolina, it’s nice to come home for a little bit, and be around everybody,” Child said. “It definitely brings back memories.”

While she didn’t play at LaGrange Academy, she did spend some time at the school Saturday morning.

“It felt weird being over there,” she said. “I’m in college, but it felt like being in high school again.”

“My freshman year, everybody was like it’s going to go by so fast, and I said no way,” she said. “I hate going to class. There’s no way it’s going to go by fast. But now it’s my senior year. You don’t even realize how fast it goes. I’m trying not to think about not playing anymore.”