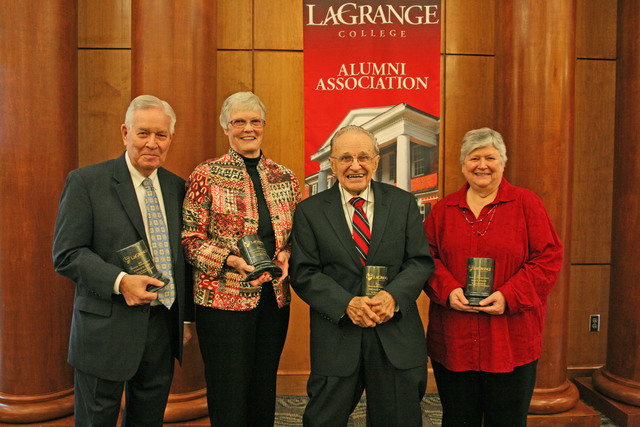 Martha Pirkle, director of alumni and community relations at the college, said she was excited to salute the new honorees.

“These incredible people have been dynamic members of our community for years,” she said. “It is such an honor to be able to recognize their work and what they mean to this institution.”

Fackler was born in Lizella, Georgia. He earned his bachelor’s degree and medical degree from Emory University in Atlanta. He and his new bride, Marjorie “Mardrie” Turner, LC class of 1941, moved to LaGrange in 1950 so he could begin his practice at Clark-Holder Clinic.

Fackler helped found the LaGrange Heart Clinic — later the Georgia Heart Clinic — and was a charter member and former president of the Georgia affiliate of the American Heart Association. He led a move to put lifesaving automated external defibrillators in all schools and public facilities.

In 1994, Fackler received the highest award given to a volunteer by the American Heart Association, becoming the first Georgian to receive the honor.

At LaGrange College, he is a fellow and has served as a member of the Friends of the Library, President’s Advisory Council, Quadrangle Society and the Leadership Council. He and his wife established the Laura Turner Fackler Scholarship in memory of their daughter, who graduated from the college in 1980.

He is a member and former president of LaGrange Lions Club, where he received the Frank C. Tigner Public Service award for exceptional community service and was named a Melvin Jones Fellow, the highest award given by the club. The LaGrange Rotary Club made him a Murphy Fellow in recognition of his contributions to the Walter Y. Murphy Scholarship. He has worked as chairman of the board of stewards at First United Methodist Church of LaGrange, where he teaches Sunday school.

Fackler served as chairman of the board of directors for LaGrange Memorial Library for 54 years and as vice president of the Chattahoochee Council of the Boy Scouts of America, who gave him the Silver Beaver Award. A longtime supporter of Camp Viola, he also volunteers at Troup Cares.

Hoppe was born in Chicago and raised in Indianapolis, Indiana.

He worked with his father in the family’s concrete business until the late 1970s, when he began a cleaning company that served college campuses. He owned several businesses with partners until striking out on his own in the late 1980s.

Hoppe founded National Management Resources Corp. as a consulting business to the hospital industry. Former college customers began asking him in the early 1990s to return to facilities management, and the business became exclusive to higher education. National has provided maintenance management and additional services for more than 30 years, and currently partners with 33 institutions across the country.

He has served as chairman of the board for West Georgia Industries, a ready-mix concrete firm based in LaGrange, and LaGrange Building Services Inc.

Hoppe served on the college’s Leadership Council for many years, and was a priority committee chairman for the group that focused on LEED certification and sustainable development.

A member of the LaGrange Rotary Club, he was named a Murphy Fellow in recognition of his contribution to the club and its Walter Y. Murphy Scholarship. He also is a former member of the board of trustees for Saint John’s Military School in Salina, Kansas.

She began her teaching career at Two Harbors (Minn.) Junior-Senior High School. From there, she served as a teaching assistant at the University of Arizona before becoming an instructor, head softball coach and intramural director. Moving to the University of North Carolina at Greensboro, she held many positions there, including instructor, head softball coach, and recreation association advisor. Additionally, she served on the UNCG Planning Council as a research assistant and as an administrative assistant.

She came to LaGrange College as an associate professor, intramural director and physical education department chair. She was promoted to professor and served as director of the core program and interim term.

Johnson served on many academic panels and councils, from the chapel committee to chair of a search committee for an academic dean. She was advisor for Alpha Phi Omega and the College 101 — Gateway to Success — Program, and a professor in the Cornerstone program. Her committee work included student affairs, student appeals, curriculum, football ad-hoc, athletics and intramurals, judiciary, academic standards and academic advising.

Johnson’s career took a spiritual turn when she became a licensed lay minister at Advent Lutheran Church. Three years later, she became pastor at Advent Lutheran and served there until 2009. Prior to becoming pastor, she served as chair of the education, worship, finance, and outreach ministries and was on the church council.

She also served her community through her work with the Troup County Golden Olympics, March of Dimes, Red Cross, Relay for Life, American Heart Association, United Way and West Georgia Hospice. In 2015 she was honored by the American Red Cross as a Community Hero.

Hancock graduated from LaGrange High School in 1971 and from Berry College in 1975 with a bachelor of science degree.

Following college, she started her new job as administrative assistant in the Office of Alumni and Community Relations at LaGrange College. It was a position she kept for 39 years before retiring in June of this year.

Hancock is a former member of the Jaycees — Junior Chamber — and was a volunteer with the Empty Stocking Fund, from buying toys and clothes for the children to helping with the distributions. She also volunteered with the group’s annual haunted houses and other projects

For more than 30 years, she was a member of the Troup Travelers Camping Club, part of the National Hikers and Campers Association, which is now the Family Campers and RVers. She and her late husband, Ray, held several leadership roles and participated in many projects concerning conservation, both locally and nationally.

Hancock is a former member of Sunnyside Baptist Church, where she served as choir member, nursery volunteer, children’s church teacher, member of the counting committee and member of the Woman’s Missionary Union, working as secretary for several years.

She was married to Ray Hancock for 34 years before his death in 2013. Her daughter, Catherine Hancock Garman, class of 2008, is married to Brett Garman, and they have a daughter, Hailey Elizabeth Garman.