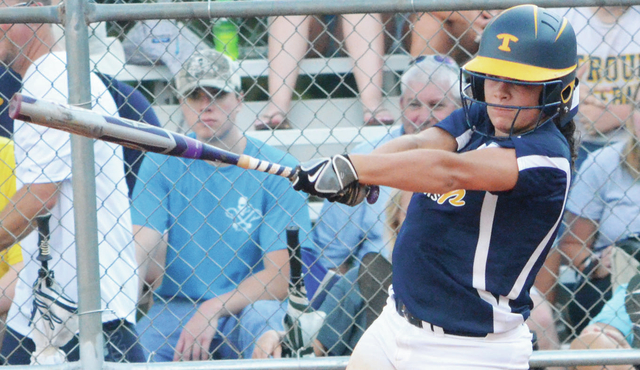 Troup third baseman Kayla Lane makes a throw to first while her sister and pitcher Hanna Lane looks on during a game this season. The sisters have been two of the top players for a team that will be on the road for the first round of the state tournament today. Kevin Eckleberry | Daily News

http://lagrangenews.com/wp-content/uploads/sites/37/2015/10/web1_10-14-troup3.jpgTroup third baseman Kayla Lane makes a throw to first while her sister and pitcher Hanna Lane looks on during a game this season. The sisters have been two of the top players for a team that will be on the road for the first round of the state tournament today. Kevin Eckleberry | Daily News Sophomore Maddie Weathers, a catcher, has been one of Troup’s leading hitters with a .431 batting average and 18 RBIs. Kevin Eckleberry | Daily News

http://lagrangenews.com/wp-content/uploads/sites/37/2015/10/web1_10-14-weathers.jpgSophomore Maddie Weathers, a catcher, has been one of Troup’s leading hitters with a .431 batting average and 18 RBIs. Kevin Eckleberry | Daily News

LAGRANGE – They’ve got momentum on their side.

After getting a pair of wins over Woodward Academy a week ago to sew up third place in Region 5-AAAA, the Troup Lady Tigers will look to keep it going today when they visit North Hall for the first round of the state tournament.

North Hall is the second seed from Region 8-AAAA after losing to Buford 1-0 in an eight-inning thriller a week ago.

Troup (12-15), which lost two close games to Whitewater in the first round of the region tournament, bounced back to beat Woodward Academy 5-1 and 5-2.

That was a marked turnaround from a year ago when Troup lost to Woodward Academy 5-0 and 9-0 to finish fourth in the region.

While Troup’s overall record is similar to a year ago, the confidence level seems to be quite a bit higher now, especially in light of the strong showing against Woodward Academy.

Earlier this season, Troup head coach Blair Shimandle said she loves the attitude of the players.

Lane has been one of the team’s top pitchers, and she has had a phenomenal season at the plate with a team-high .465 batting average, and she has 15 RBIs.

Wheeler, who like Lane and Arnold is a four-year starter, has a pair of home runs this season with seven RBIs, and thanks in large part to a team-leading 19 walks, she has an on-base percentage of .416.

Jones and White have been valuable players off the bench.

“With them, just leading by example is huge,” Shimandle said of the seniors. “It’s hard to find a group of seniors that can be vocal leaders, and lead by example. They don’t just tell you what to do, they do it themselves. All five of our seniors do that.”

Among the underclassmen, sophomore catcher Maddie Weathers has been swinging a hot bat this fall.

Weathers, who missed a few games late in the season with a knee injury but is back in the lineup now, is hitting .431, and she is tied for the team lead with 18 RBIs.

Freshman third baseman Kayla Lane, who is Hanna Lane’s sister, has adjusted nicely to the high-school game and is hitting .353 with 18 RBIs.

Another freshman, outfielder Madison McCartney, has been a productive hitter with 12 RBIs.

Junior Kinley Stanford has driven in nine runs and she has been a patient hitter with 17 walks and her on-base percentage is .427, and Andrea Nix has contributed offensively with six RBIs.

On the pitcher’s mound, it has been a group effort with Hanna Lane, Kayla Lane and Abby Taylor each throwing a bunch of pitches this season, and all three of them have thrown in big situations.

As for today’s opponent, North Hall has a standout pitcher in Kendyl Chase, who was on the winning end of a 1-0 shutout victory over Madison County in the region tournament.

In the region-title game, Chase allowed just one unearned run.

Although North Hall lost that game, it was an impressive showing against a Buford program that has won eight consecutive state championships.

North Hall is in the state playoffs for the first time in nearly 10 years.

“We’re definitely excited about that,” North Hall coach Brooke Russell said. “I’m super proud of them. We’ve done much better as a group this year. They’ve been a lot of fun to coach this year. I’m just excited to keep on keeping on.”