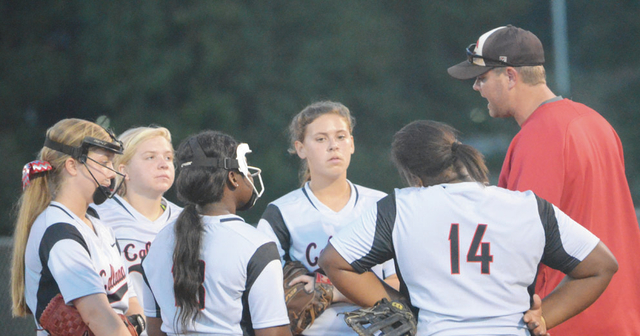 Ashley Summerlin’s Callaway Lady Cavaliers will be on the road for the first round of the state softball tournament. Kevin Eckleberry | Daily News

http://lagrangenews.com/wp-content/uploads/sites/37/2015/10/web1_summerlin.jpgAshley Summerlin’s Callaway Lady Cavaliers will be on the road for the first round of the state softball tournament. Kevin Eckleberry | Daily News

For the second straight year, Callaway, LaGrange and Troup have all qualified for the state softball playoffs, and all three of those teams will be on the road for first-round matchups this week.

Troup didn’t know who its first-round opponent would be until Monday afternoon when Buford beat North Hall 1-0 to win the Region 8-AAAA championship.

Troup, the third-place finisher from Region 5-AAAA, will visit second-seeded North Hall in a best-of-three series that gets under way on Wednesday.

After falling to Whitewater in the first round of the region tournament, Troup bounced back to sweep Woodward Academy 5-1 and 5-2 to secure the third seed.

If Troup beats North Hall, it would play either Bainbridge or Walnut Grove in the second round.

A year ago, as a number four seed, Troup lost its first-round series to Marist.

LaGrange played its way into the state playoffs by going 2-2 in the region tournament last week in Columbus.

If LaGrange gets by Stockbridge, it would play Allatoona or Loganville in the second round.

Callaway is the fourth seed from Region 5-AAA, and its opponent in the first round is Region 8-AAA champion Morgan County.

After losing its first game in the region tournament, Callaway bounced back to beat Haralson County 11-3, and that was the win that sewed up a state berth.

After the first two rounds of the state playoffs, the surviving eight teams in each classification will be in Columbus on Oct. 29 for the elite eight.