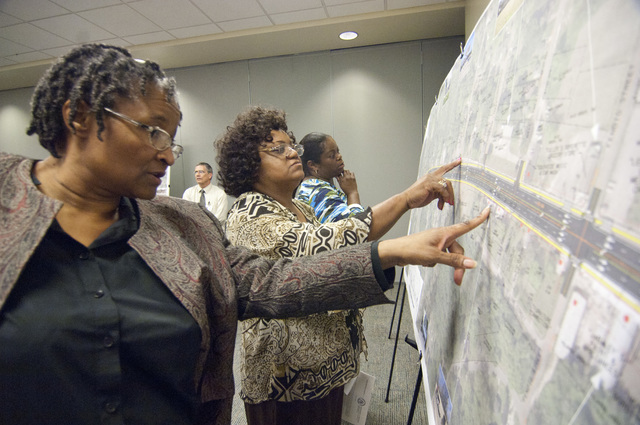 Faye Gilliam, right, and Melissa Pittman, both owners of property near Hamilton Road, look for their property on a Georgia Department of Transportation map Tuesday at an open house regarding the road’s widening. GDOT plans to double the size of the road and add numerous features, including sidewalks.

http://lagrangenews.com/wp-content/uploads/sites/37/2015/10/web1_WEB1014OpenHouse.jpgFaye Gilliam, right, and Melissa Pittman, both owners of property near Hamilton Road, look for their property on a Georgia Department of Transportation map Tuesday at an open house regarding the road’s widening. GDOT plans to double the size of the road and add numerous features, including sidewalks.

LaGRANGE — A larger than expected crowd showed up Tuesday for a Georgia Department of Transportation open house on the widening of Hamilton Road.

In a packed room at the Mike Daniel Recreation Center on Lafayette Parkway, dozens of people milled about as they inspected static displays, videos and renderings of the proposed project, which would transform the congested, two-lane road into a four-lane thoroughfare with a center turning lane.

“This is one of the largest turnouts I’ve ever seen,” said James Emery, Troup County engineer. “It really shows how interested people are in seeing this project get done.”

More than a dozen representatives from GDOT and its consultants were on hand to answer residents’ questions and concerns and take public comment.

Melissa Pittman, who attended the meeting and owns property near the project, said she supports what GDOT intends to do and is looking forward to the changes.

“I think it’s going to be a good thing,” she said. “I’m ready to get in that four-lane and zip on to work.”

Kevin VanHouten, GDOT’s director of the Hamilton Road project, said it could take between two and three years to acquire all the property needed to complete the project. He’s expecting it to cost about $19 million just to purchase the 64 properties and an additional $9.5 million to widen the road.

The construction will begin after the acquisition of the properties and would likely take about two more years. The state is yet to determine the funding source of the project, he added, but that decision could be made my the end of the year.

Of the 64 properties that will be acquired by GDOT, 37 are residential and 27 are business locations.

The project begins on Main Street in front of the Habitat for Humanity ReStore. Two properties across the street from the ReStore will be acquired by the state, and the road will continue to the intersection of Morgan Street and Hamilton Road. The signal at that intersection will be replaced and two lanes will carry traffic on the west side, closest to the Speedy Serve gas station.

Three lanes — a left turn, a right turn and a forward lane — will carry traffic in the opposite direction, coming from Hamilton Road toward Morgan Street. Eleven properties on the east side of the road headed toward the Morgan Street and Hamilton Road intersection will be acquired.

As motorists continue on Hamilton Road toward Troup High School, the road will remain two lanes in each direction with a turning lane in the center. GDOT plans to acquire the BP gas station at the intersection of Hamilton Road and Brown Street along with several other properties that sit close to the road.