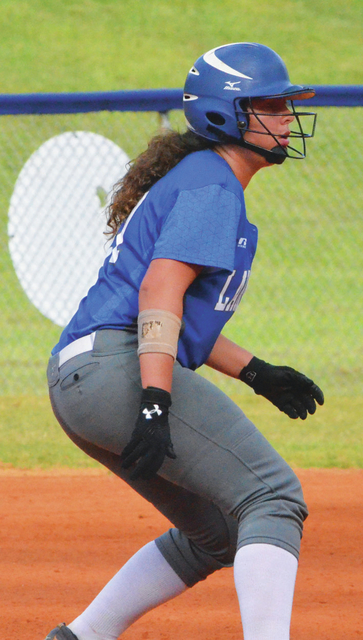 LaGrange’s Destiny Gay, seen in action during a game last season, will try to help her team beat Woodland in the first round of the state tournament. Kevin Eckleberry | Daily News

http://lagrangenews.com/wp-content/uploads/sites/37/2015/10/web1_10-14-gay.jpgLaGrange’s Destiny Gay, seen in action during a game last season, will try to help her team beat Woodland in the first round of the state tournament. Kevin Eckleberry | Daily News Infielder Leighton Parker is one of the LaGrange seniors hoping to keep the season going past today. Kevin Eckleberry | Daily News

http://lagrangenews.com/wp-content/uploads/sites/37/2015/10/web1_10-14-parker.jpgInfielder Leighton Parker is one of the LaGrange seniors hoping to keep the season going past today. Kevin Eckleberry | Daily News

LAGRANGE – It’s a big-time challenge for the LaGrange Lady Grangers, but at least they’ll be going into today’s state-playoff opener at full strength.

For most of the season, LaGrange’s softball team has had to play without senior Destiny Gay, who had been recovering from a serious knee injury.

Gay returned to action during the Region 1-AAAAA tournament, and she’ll be a part of the LaGrange team that will be in Stockbridge today to play Woodland in the first round of the state playoffs.

It’ll be a best-of-three series, with the teams playing two game today beginning at 5:30 p.m.

If the teams split today’s games, a deciding Game 3 will be played on Thursday.

While LaGrange finished fourth in its region, Woodland won the Region 4-AAAAA championship.

Gay, a key member of the LaGrange lineup a year ago, made her presence felt in the region tournament when she had an RBI hit against Columbus.

“She came in and got a big hit against Columbus, drove in our only run,” LaGrange head coach Dewey Lee said. “That gives us another bullet.”

Lee added that we’re “still real cautious with her knee.”

Gay is one of four seniors on the LaGrange team along with Cassidy Creed, Leighton Parker and Miranda Hamer.

While Creed, Parker and Hamer have been on the field since Day 1, Gay has had to sit and watch, but it’s better late than never.

“She’s been fighting hard to get back out there,” Lee said. “We’re glad to have her.”

LaGrange will have its hands full against Woodland.

Woodland (25-3) enters the state playoffs with 15 consecutive wins, and it beat Union Grove 2-1 and 4-2 last week to secure the region title.

LaGrange (10-19) earned its state spot by posting a 2-2 in the region tournament.

LaGrange wrapped up a state bid by beating Carver 15-1 before falling to Columbus 10-1 in its final game in the double-elimination region tournament.

LaGrange also beat Hardaway and lost to Northside in the region tournament.

Lauren Kuerzi has had a huge season for LaGrange with a batting average above .500, and she has banged out six home runs.

Shaq Sutton has also had a productive season with a batting average above .300, and Hamer and Creed have both been among the team’s leading hitters.

Along with Kuerzi, Hamer and Creed have also reached double digits in RBIs.

McLain Skinner, who missed a good portion of the 2014 season with a knee injury of her own, has done the bulk of the pitching this season and she’ll be on the mound today.

Creed has also pitched for LaGrange this season and has been effective.

Lee said the goal today will be to “play hard, and you see what works out.”

Lee said the team has been working hard in practice on the things he hopes will bring success today.

“We worked on a lot of small ball, putting the ball in playing, putting pressure on the other team,” Lee said. “Just basic fundamentals, going over stuff we need to shore up, and just making good plays, and just put it in their mind to relax and have fun.”