Callaway runs away with championship 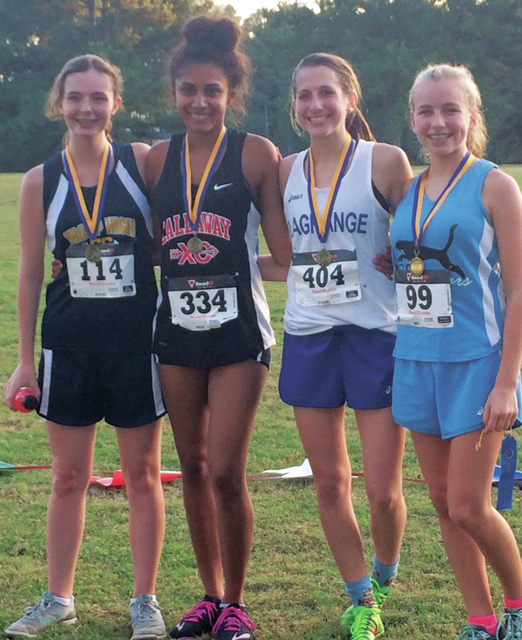 The Callaway High girls’ cross-country team raced to the top spot in the county championship on Tuesday at Troup High. Contributed photo LAGRANGE – While LaGrange High’s Alaina Tomlinson was the first runner across the finish line on Tuesday, it was the Callaway High girls’ team capturing the county championship for the second consecutive year.

In the meet that was held at Troup High, Tomlinson took the top spot with a time of 20 minutes, 25 seconds, and she finished more than three minutes ahead of Callaway’s Sierra Jones.

Callaway’s superior depth allowed it to race away with the county title.

Callaway had three finishers in the top eight, and none of its top five runners were lower than 13th.

In the boys’ race, LaGrange’s Sam Bowie crossed the finish line first, but the results from that race weren’t official due to an unfortunate mix-up on the course.

Some of the runners ended up going the wrong way and they cut about a half-mile off the 3.1-mile course, so afterward the decision was made to void all of the times.

Troup coach Pete Anderson said he’s hopeful they’ll be able to re-run the boys’ race, but that could be difficult since the season is winding down.

In the girls’ race, it was Tomlinson claiming the individual title for the second consecutive year.

Following her across the finish line was Jones, who completed the course in 23:40.

This was the first year Lafayette Christian has participated in the county championship.

“Lafayette Christian’s been working hard to build their team,” Anderson said. “We wanted to include them.”

Rounding out the top five was LaGrange’s Ellie Doerr (24:57).