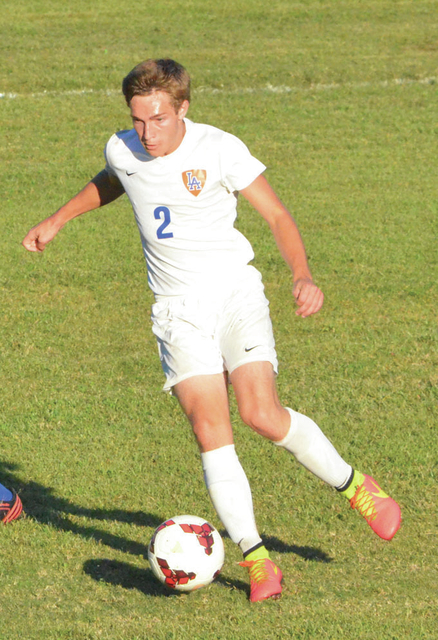 Will Trotter made the game-winning goal for LaGrange Academy with less than two minutes remaining. Kevin Eckleberry | Daily News Jake Keeble made a goal in the first half to give LaGrange Academy a 1-0 lead. Kevin Eckleberry | Daily News

http://lagrangenews.com/wp-content/uploads/sites/37/2015/10/web1_10-15-keeble.jpgJake Keeble made a goal in the first half to give LaGrange Academy a 1-0 lead. Kevin Eckleberry | Daily News

LAGRANGE – For two straight years, they had to stand to the side while another team celebrated, while another group of players posed for photos with the state-championship trophy.

On Friday night at Clayton State University, the Warriors were back in a familiar place, playing for the GICAA state soccer title.

LaGrange Academy’s opponent in this year’s championship game was Furtah Prep, which hadn’t dropped a game all season.

The two teams had played recently, with Furtah Prep winning at LaGrange Academy to sew up the region championship.

So that’s what was facing the Warriors.

They were trying to not only shed their unfortunate history in the title game, but they were attempting to upend a powerful opponent.

It was a daunting challenge, but the Warriors were up to the task.

In a thrilling game, Will Trotter made a goal with less than two minutes remaining to give the Warriors the lead, and they held on from there for a 2-1 victory.

“To finally get over the hump, it meant so much, especially it being my senior year,” said Zach Callaghan, who scored 26 goals this season. “It meant everything. It was amazing.”

Trotter said that’s something the players were thinking about going into the game.

LaGrange Academy took the lead in the first half on a goal from Jake Keeble, and Furtah Prep answered with a goal of its own late in the half.

It was still a 1-1 game late in regulation when the ball found its way to Trotter.

“It was a through ball to (Callaghan), and he crossed it in and it deflected off a defender, and it was a slow-rolling ball in the central-midfield,” Trotter said.

From there, Trotter measured his shot and let it go.

“There were like three defenders in the center,” Trotter said. “I just placed it to the left. It was a hard-driven shot, and it went in.”

After the goal, Trotter said “we had a little celebration, but Petite was yelling to get back. We still had time left to play.”

Furtah Prep nearly came through with a goal of its own with moments left in the game.

“Their last shot with five seconds left went right off the cross bar,” Trotter said. “My heart just dropped. I thought they were going to tie it up.”

Fate was on LaGrange Academy’s side, though, and after that last-gasp shot attempt missed, time ran out and the celebration was on.

“It was a complete team win,” Callaghan said. “It wasn’t like we had somebody just take over. Everyone played well, everyone had to fight and win their own battles so we could have a team victory.”

Trotter said it was a true team victory.

“We were just the better all-around team,” Trotter said. “I think they had better individual players, but we came through with the win as a team.”

Brandon Moncus said the team made incredible strides from the beginning of the summer to the championship game.

“We started playing in the seven-on-seven tournament during the summer, and you look from early June to now, it’s not even the same team we’re so much better,” Moncus said.

Colby Heath echoed that sentiment, adding that “the longer we played together, the more chemistry we gained. We were hanging out with each other a lot. It’s a good group of guys.”

Heath said everyone on the team, all 19 players, did something to help bring home the championship.

Petite said that no matter what happened during the season, the players stayed upbeat, and they kept working hard.

“They’ve generally enjoyed being with each other,” Petite said. “Every day they were out there, and they were all in a good mood at practice. It made it easy. They were willing to do everything every day.”

Petite also said he appreciated the assistance the fans provided during the championship game.

“We had tremendous support,” Petite said. “The crowd out there for the finals was amazing. We had easy 70-plus people there. When we scored that goal with a minute and a half to go, it was the loudest I’ve ever heard at a soccer game, just the roar from them.”

They’re not ready for it to end