Tigers get ready for another rugged opponent 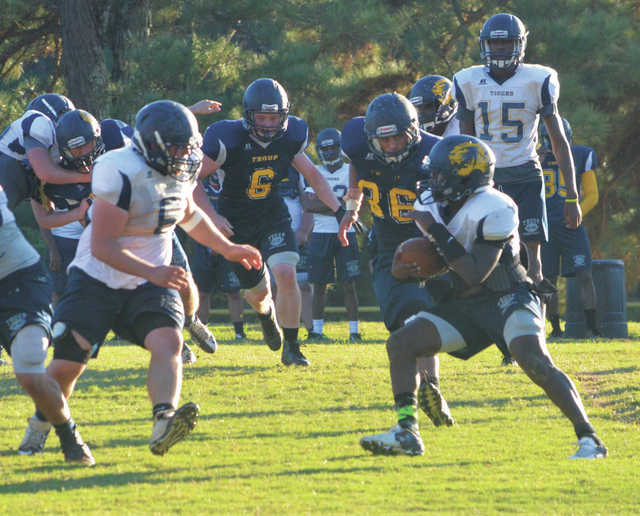 The Troup Tigers run a play during practice on Wednesday. Troup will visit Sandy Creek on Friday for a region game. Kevin Eckleberry | Daily News

LAGRANGE – There’s no relief for the Troup Tigers.

After opening their Region 5-AAAA schedule with a game against unbeaten Woodward Academy a week ago, the Tigers will be on the road on Friday to play another team with state-championship hopes.

Sandy Creek (5-1), which has been a juggernaut for the past decade under head coach Chip Walker, will host Troup in the second region game for both teams.

Sandy Creek lost its second game of the season, 17-15 to Jonesboro, but it has won four in a row since then, and each of those wins has been by at least 34 points.

“This is the best team we’ve played so far,” Troup head coach Tanner Glisson said. “They’re really good. They’re physical. They’re big. They’ve got players running around all over the place. It’s going to be tough.”

For Sandy Creek, being among the state’s elite teams is nothing new.

Walker took over the Sandy Creek program in 2005, and his teams have never won fewer than seven games and have been in the playoffs every year.

A year ago, the Patriots won 11 games, but they failed to win a region title for the first time since 2007, and they didn’t make it past the quarterfinals.

In last week’s win over Whitewater, Sandy Creek didn’t give up a first down until the fourth quarter when the backups were in the game.

Glisson hopes to one day get the Troup program to the level of Sandy Creek’s.

For the moment, the Tigers are just looking for a victory.

With last week’s loss to Woodward Academy, the Tigers are 0-6, although they are still in the playoff race with four region games remaining.

Troup hung tough with Woodward Academy for a while.

It took Woodward Academy less than a minute to score a touchdown and take a 7-0 lead, but on the first play of the second quarter, Dexter Shealey threw a touchdown pass to Tremayne Tolbert, and Michael Young’s extra point tied it at 7-7.

It has been an unfortunate pattern this season for the Tigers that when they start to build up some momentum, something quickly goes wrong.

That was the case against Woodward.

Moments after Troup’s touchdown, Woodward returned the ensuing kickoff for a touchdown to reclaim the lead.

About a minute after that, Woodward had a punt return for a touchdown, and the lead was 21-7.

A long fumble return set up another Woodward touchdown late in the half, and Troup trailed 31-7 at the break.

The Tigers looked like they might be able to get back into the game when they caught a break of their own in the third quarter.

After a Woodward player touched the ball on a Young punt, Troup recovered the ball just a few yards from the end zone.

Camren Russell scored on a 1-yard touchdown run, and after Young made the extra point, Woodward’s lead was down to 31-14.

Three Woodward Academy touchdowns, including one that came on an interception return, put the game out of reach.

Troup did drive 76 yards for a touchdown in the fourth quarter, with Montez Crowe doing a nice job of directing things after moving to quarterback.

Jackson Davis, one of Troup’s talented underclassmen, had a 3-yard touchdown run with 55 seconds remaining.

Glisson said improving in the kick-return game has been a focal point of practice this week.

“We’ve got to get better personnel out there. The guy with the ball in his hands is a lot better than the guy trying to tackle him,” Glisson said. “A couple of times we’ve got a guy right there, and he takes one stutter step and he’s gone. We spent a lot of time on our kickoff and punt return teams. We’ll see if it pays off on Friday.”

There have been some positives the past two games, particularly on offense where the Tigers have scored a combined 45 points against Callaway and Woodward Academy.

Troup’s defense also had an improved effort against Woodward, especially when it came to limiting big plays.

Unfortunately for the Tigers, the progress they’ve made is hard to measure against teams the caliber of Sandy Creek and Woodward Academy.

Troup continues its rugged schedule with a game against Carrollton next week.

“It gets harder and harder every week,” Glisson said. “You need to feel like you’re going into a week where you’ve got a chance. It’s tough. I’d be lying if I sat here and told you it wasn’t tough. But we’ll keep grinding. That’s all you can do.”