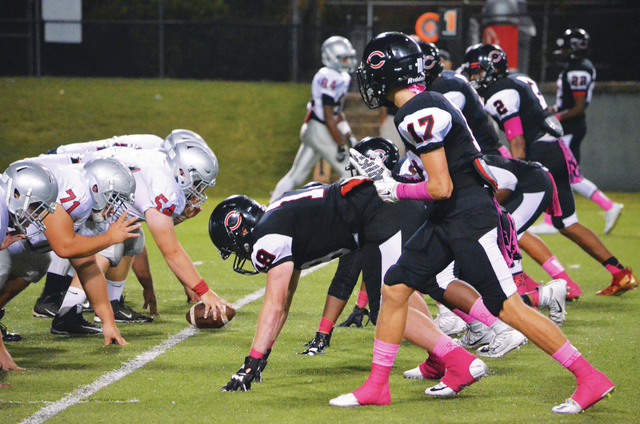 Callaway’s Cedric Maynard ran for more than 100 yards and had a touchdown catch in one half against Cedartown last week. Kevin Eckleberry | Daily News

http://lagrangenews.com/wp-content/uploads/sites/37/2015/10/web1_10-16-callaway3.jpgCallaway’s Cedric Maynard ran for more than 100 yards and had a touchdown catch in one half against Cedartown last week. Kevin Eckleberry | Daily News HOGANSVILLE – It’s a part of the game.

In a sport where nearly every play ends with a collision, where players are running and jumping and getting knocked around, there are going to be injuries, and the Callaway Cavaliers haven’t been immune to that this season.

The Cavaliers have had multiple injuries on both sides of the football, and while head coach Pete Wiggins would obviously rather see his team remain 100 percent healthy, he has been glad to see other players rise to the occasion when given the opportunity.

“We played a physical schedule, and there’s always going to be bumps and bruises,” Wiggins said. “I feel like we’ve had a lot of guys step up and perform in critical positions. You just have to keep believing in what we do, and believing in one another, and play fast and hard. I feel good about our football team.”

A week ago, the Cavaliers had to play in the second half without quarterback Braylon Sanders and running back Cedric Maynard.

While Sanders suffered a knee injury in the first half, Maynard was out with an illness.

Without those two, Dylan Johnson stepped in at quarterback and kept things running smoothly, and Tyrek Frazier had some big runs as Callaway rolled to a 43-17 victory to win its fifth straight game and get its Region 5-AAA schedule started in fine fashion.

Callaway will look to make it two in a row in region play when it visits Rockmart tonight.

Once again, it’ll be Johnson at quarterback, and while a player of Sanders’ quality will clearly be missed, Callaway is still in good shape at that position.

Johnson, a junior, was Callaway’s starting quarterback in the two playoff games a year ago, and he was also the starter in a preseason game in August against Greenville.

“Dylan’s played in two big-time playoff games, and a scrimmage game,” Callaway offensive coordinator Matt Napier said. “Our offense doesn’t change. They do similar stuff. They’re both great athletes. Both of them are able to run the ball, to pass the ball.”

On Callaway’s first possession of the third quarter last week, Callaway scored a touchdown, with Johnson and Frazier playing key roles on the drive.

Frazier had five carries for 29 yards on that drive, including a 12-yard touchdown run, and Johnson completed a pass for a first down to fullback Brandon Boddie.

As for Maynard, he finished the game with 11 carries for 116 yards with a touchdown run, and he also caught a 24-yard scoring pass from Sanders.

Before he left the game, Sanders was sharp, completing 5-of-6 passes for 72 yards with a touchdown, and he also ran twice for 11 yards.

Sanders was a wide receiver a year ago, and an excellent one at that, but the coaches felt he was the ideal fit to be the quarterback in Napier’s offense.

Sanders didn’t play in the preseason game against Greenville because of an injury, so his first action at quarterback came in the season opener against LaGrange.

The Cavaliers dropped that game 45-20, but they haven’t lost since, and Napier said Sanders has been improving every week.

“Braylon had a growing period,” Napier said. “He came into that LaGrange game, and that’s his first live snaps at quarterback, and he had to play in that atmosphere. And how much he has progressed through the five games, it’s amazing. He’s able to do all the stuff we’re able to do.”

Napier said as the season has gone along, the offense has opened up considerably.

“It’s understanding defenses, and me being comfortable with a guy calling plays is huge,” Napier said. “He’s been able to let me open up the playbook.”

Against Troup, Callaway scored touchdowns the first five times it touched the ball, and Sanders was sensational with three scoring passes to three different receivers.

Sanders had it working again last week against Cedartown before he had to leave the game late in the first half.

In steps Johnson, who has been one of the team’s top defensive players this season from his safety position.

Johnson began the season as a linebacker before moving to safety, and he has exceled in that role.

“He’s really talented in his own right,” Napier said. “We knew how good of a defensive player he was. He started all year as a 10th grader last year as a linebacker. He’s really had a good year at safety.”

Whoever is playing quarterback has the luxury of handing the ball off to Maynard, who is having a remarkable season.

A backup to Eddie Culpepper a year ago, Maynard is on track to finish with more than 2,000 yards in the regular season, and he is averaging more than 10 yards per carry.

Frazier has also been terrific this season, and Dre Martin, Joe Brown and the other wide receivers have been making plays.

Martin and Brown both had touchdown catches against Troup along with Maynard.

As long as Johnson is playing quarterback, his time on defense will be limited, and that just means someone else will have to step up.

Wiggins said Napier and defensive coordinator Dusty Hubbard have both substituted a lot this season, so when a player gets his chance, he’s ready.

“On both sides of the ball we’ve rotated a lot of kids,” Wiggins said. “On the offensive line, we’ve had eight different kids in to play. On the defensive line, we’ve rotated a lot of different guys. At linebacker, coach (Deyano) Martin is doing a great job rotating guys in and out. In our secondary, Kobe Jackson broke his fibula. He’s not back out to practice, but he’s getting closer every day. We’ve had our share of injuries. We just have to keep working hard, believing in one another.”

As for today’s opponent, it has been a difficult season for Rockmart.

Rockmart won its season opener against North Murray, but it has lost five in a row since then.

In its region opener last week, Rockmart lost to Pepperell 50-13.

Wiggins said it’s not a game his team is taking lightly, though.

“Their skill kids look really good,” Wiggins said. “They have a big offensive line. Anytime you go on the road, it’s a bigger challenge. It’s a two-hour bus ride. We have to stay focused, and play Callaway football. It’s a big region game. We have to minimize our mistakes, block well, and tackle well, do the fundamental things well.”