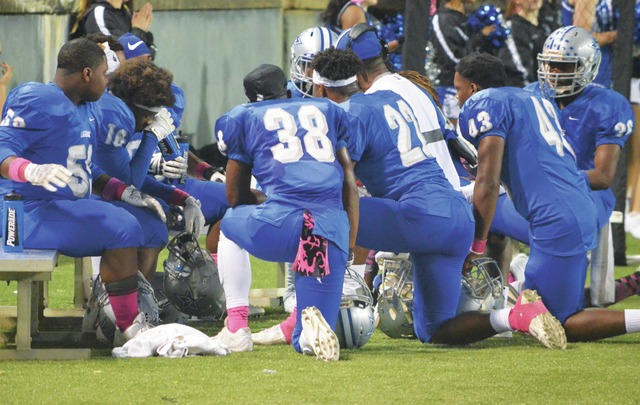 LaGrange’s punt return team waits for the ball to come to a rest during the second half of Saturday’s 51-50 loss to Carver. LaGrange returns from its off week to play Shaw on Friday. Kevin Eckleberry | Daily News

http://lagrangenews.com/wp-content/uploads/sites/37/2015/10/web1_10-16-LHS4.jpgLaGrange’s punt return team waits for the ball to come to a rest during the second half of Saturday’s 51-50 loss to Carver. LaGrange returns from its off week to play Shaw on Friday. Kevin Eckleberry | Daily News LaGrange’s defense huddles during last week’s game against Carver. LaGrange needs a strong finish to make sure it makes it to the state playoffs. Kevin Eckleberry | Daily News

http://lagrangenews.com/wp-content/uploads/sites/37/2015/10/web1_10-16-LHS5.jpgLaGrange’s defense huddles during last week’s game against Carver. LaGrange needs a strong finish to make sure it makes it to the state playoffs. Kevin Eckleberry | Daily News

LAGRANGE – Looking back on the first seven games of the season, the LaGrange Grangers have to be wondering what might have been.

The Grangers have lost their four games by a total of 23 points, and they had a chance to win each of them right up until the closing moments.

The record is what it is, though, and the Grangers still have plenty to play for as they gear up for the home stretch of the regular season.

LaGrange will return from its off week with a game at Shaw on Friday before coming home to play Harris County on Oct. 30.

LaGrange will finish the regular season with a road game against Northside on Nov. 7.

If the Grangers win out, they’ll be guaranteed one of the region’s four spots in the state playoffs, and that is obviously the goal.

“I don’t have a worry in the world about making the playoffs,” LaGrange head coach Dialleo Burks said. “We’re going to make the playoffs.”

When LaGrange visits Shaw, it will look to bounce back from the heart-breaking loss to Carver in a game in which it led 28-0 in the first half.

The Grangers did so many things right, especially on the offensive end where they were unstoppable.

LaPerion Perry, who had nearly 400 combined yards in the air and on the ground, continued to shine in his first season as the starting quarterback, and he threw two touchdown passses and had a pair of long scoring runs.

Mike Hardy also had two touchdown receptions, and Derieko Smith had one scoring catch, and he nearly had another after being called down inches from the goal line as the first half ended.

The Grangers were driving at the end of the game, but they ran out of time and had to attempt a 39-yard field goal that just missed, and it was the Tigers walking away with the one-point win.

“It was an emotional contest last week,” Burks said. “But it’s one that you can grow from, and we will grow from it.”

While the record is disappointing, the Grangers have shown they have the ability to play with elite teams.

An unbeaten Mary Persons team needed a last-second field goal to get a 16-13 home win over LaGrange.

Against a Spalding County team with just one loss, LaGrange was in it the whole way in a 20-9 loss.

After a 21-13 loss to Columbus, LaGrange took Carver to the wire before losing by one.

Burks believes this team, if it is operating at peak effiency, can go a long way.

“On any given day, we don’t know which team is going to show up,” Burks said. “If the right team shows up and the right team finishes, we’re going to play for a long time.”