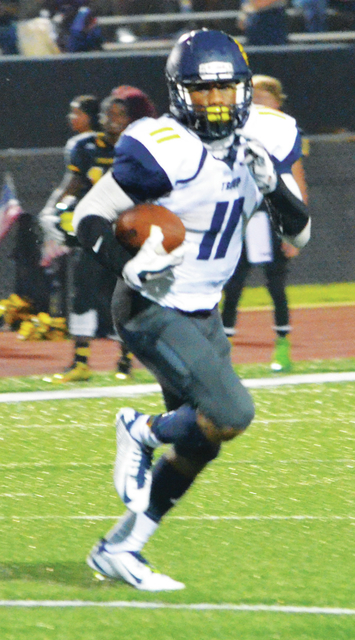 The Callaway Cavaliers charge onto the field before game this season. Callaway got a 37-0 road win over Rockmart on Friday to improve to 6-1. Kevin Eckleberry | Daily News

http://lagrangenews.com/wp-content/uploads/sites/37/2015/10/web1_10-18-callaway1.jpgThe Callaway Cavaliers charge onto the field before game this season. Callaway got a 37-0 road win over Rockmart on Friday to improve to 6-1. Kevin Eckleberry | Daily News

With Cedric Maynard doing his thing and the defense delivering a dominant performance, it was a winning night for the Callaway High football team.

Maynard, a senior running back who is having a phenomenal season, scored four touchdowns and the defense shut down the home-standing Yellow Jackets as the Cavaliers rolled to a 37-0 win in the Region 5-AAA game.

The Cavaliers (6-1), who have won six in a row since a season-opening loss to LaGrange, improved to 2-0 in the region heading into Friday’s showdown with Pepperell.

Also on Friday, Troup was on the road against a powerful Sandy Creek team, and it was a tough night for the visiting team.

At Rockmart, Maynard had two touchdown runs in each half, and Dre Martin threw a scoring pass to DQ Wilkerson in the second half.

It was also a good night for sophomore kicker Noah Stephens, who made all four of his extra-point attempts, as well as a 27-yard field goal in the second quarter.

The Cavaliers didn’t need a whole lot of offense the way the defense was playing.

The Yellow Jackets only had a handful of first downs in the game, and the closest they came to scoring was late in the fourth quarter when Callaway’s backups were in the game.

Khaliq Swift preserved the shutout for Callaway with an interception at his own 12-yard line in the game’s closing moments.

The Cavaliers scored what turned out to be the only points they’d need on their opening possession, with Maynard scoring on a 5-yard run with 9:23 left in the first quarter.

A two-point attempt was unsuccessful, and Callaway led 6-0.

That’s the way it remained until Stephens banged through a 27-yard field goal with 7:35 left in the first half.

After a Rockmart punt, Callaway got a 25-yard touchdown run from Maynard and a Stephens extra point to take a 16-0 lead, and that was the score at the half.

The Cavaliers busted it open in the third quarter.

Less than a minute into the second half, Maynard scored on a 10-yard run, and the lead was 23-0.

Maynard had a 30-yard run and a 10-yard run right before his touchdown.

Rockmart went three-and-out on its ensuing possession, and following a short punt, Martin found Wilkerson from about 30 yards out for the touchdown.

With the extra point, Callaway had scored 14 straight points to take a 30-0 lead, and barely three minutes had expired in the third quarter.

Later in the quarter, Maynard struck again, this time on a 50-yard touchdown run, and Callaway was ahead 37-0.

From there, Callaway head coach Pete Wiggins began to substitute freely, and the fourth quarter went quickly with a running clock.

At Sandy Creek, the home team showed why it is one of the favorites to win the Class AAAA state championship.

The Tigers did continue to move the ball well as they have in recent games, and Mess Bonner showed off his big-play ability with a 90-yard touchdown run in the final minutes of the game.

Troup also got a 1-yard touchdown run from Camren Russell in the first half.

Sandy Creek scored five offensive touchdowns, and it also scored on a punt return, and on a kickoff return to begin the second half.

After falling behind 28-0 early in the second quarter, Troup put together a 65-yard touchdown drive that included a pair of fourth-down completions from Dexter Shealey to Tremayne Tolbert.

On the second of those completions, the Tigers had the ball at the 3-yard line, and two plays later, Russell muscled his way into the end zone for the score.

Sandy Creek answered with two touchdowns to take a 42-7 lead at the half.

After Sandy Creek took the opening kickoff of the second half for a touchdown, Troup trailed 49-7, and that’s how it remained until Bonner beat the defense for a long scoring run with 1:19 to play.