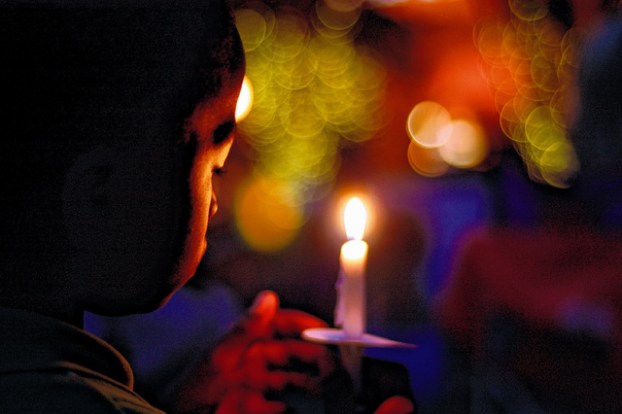 Vigil in LaGrange to shed light on domestic violence Guest speakers at this year’s ceremony include Deborah Dunn, a domestic abuse survivor and administrator at Callaway Middle School, and Dane Knopp, a relative of the Burtron family murdered in thier home earlier this year.

http://lagrangenews.com/wp-content/uploads/sites/37/2015/10/web1_vigil2RGB22.jpgGuest speakers at this year’s ceremony include Deborah Dunn, a domestic abuse survivor and administrator at Callaway Middle School, and Dane Knopp, a relative of the Burtron family murdered in thier home earlier this year. Dozens of people are expected for the annual candlelight vigil in honor of domestic violence awareness month this Tuesday on Lafayette Square. The ceremony is scheduled to begin at 6:30 p.m. and is hosted by Harmony House.

http://lagrangenews.com/wp-content/uploads/sites/37/2015/10/web1_vigil1RGB2.jpgDozens of people are expected for the annual candlelight vigil in honor of domestic violence awareness month this Tuesday on Lafayette Square. The ceremony is scheduled to begin at 6:30 p.m. and is hosted by Harmony House.

LaGRANGE — A powerful reminder of the lives lost to domestic violence — and those who have survived the abuse — will once again shine forth Tuesday on Lafayette Square starting at 6:30 p.m.

“We’re hoping people will remember it is a community effort to recognize the signs of domestic violence, help get the word out and be able to refer people to the Harmony House to get assistance,” explained Amanda Jeter, the Harmony House prevention and volunteer coordinator.

The guest speakers this year will both be familiar faces to Troup County residents. Deborah Dunn is an administrator at Callaway Middle School. Jeter said she has agreed to share her story about her first marriage — which was both mentally and emotionally abusive, she said.

“She wants to let people know you can get out (of an abusive relationship) and have a healthy marriage,” Jeter explained.

Dunn has since remarried.

The second guest speaker will be Dane Knopp. Knopp’s story will be very different from Dunn’s account. He is the cousin of Bailey Burtron — one of the four family members who, along with a family friend, were murdered in their Woodstream Trail home on Jan. 28 by fellow family member Thomas J. Lee. He pleaded guilty on Aug. 12 and was sentenced to life in prison without the possibility of parole.

According to Jeter, Knopp will explain how domestic violence affects victims — and the loved ones left behind.

“Domestic violence doesn’t discriminate based on age, gender or socioeconomic status,” she said. “There are safety services available to help victims and provide a safety plan to get them out of that situation.”

Jeter said she also hoped more teens will plan on attending the candlelight vigil. Recently, the prevention coordinator has been granted permission to talk to students in the Troup County School System about teen-dating violence.

Right now, Jeter’s program is aimed at ninth graders, but she hopes to expand to all grade levels. According to her, one in four teenagers will be affected by some type of dating violence.

“It’s definitely going on,” she said. “The students are seeing it (dating violence), they’re just not recognizing it as an abusive behavior. To them, having to constantly ask permission to do something or check in (with a boyfriend or girlfriend) is normal.”

But she hopes teens — and the community as a whole — will see domestic violence is not a normal or acceptable way of life at the vigil on Tuesday. Jeter and the staff of Harmony House plan to light candles to honor survivors of abuse.

Then they will illuminate seven lanterns — one for each member of the Burtron family; one for Iionna Green, the Burtron family’s friend who was also killed; one for Courtney Jackson; and one for Tammie Beasley — people who all lost their lives to domestic violence within the past year in the Troup County area.

By Melanie Ruberti mruberti@civitasmedia.com Workers stand outside the Sewon plant at 1000 Sewon Blvd. after the facility was evacuated around... read more