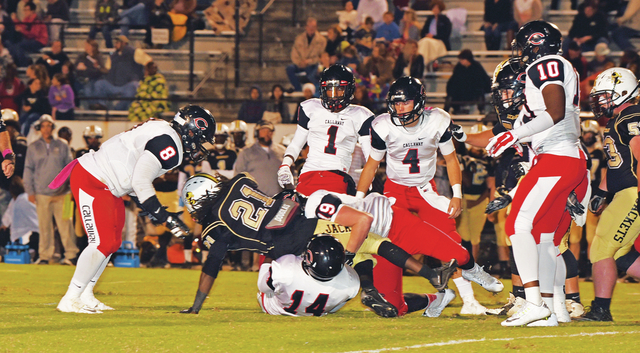 Callaway’s Cedric Maynard has more than 1,500 rushing yards in seven games after a big night against Rockmart. Photo by Eddie Sherrer

http://lagrangenews.com/wp-content/uploads/sites/37/2015/10/web1_10-19-callaway2.jpgCallaway’s Cedric Maynard has more than 1,500 rushing yards in seven games after a big night against Rockmart. Photo by Eddie Sherrer Maynard is putting together a phenomenal senior season, and he continued to make opposing defenses look helpless with an amazing effort in a 37-0 victory over Rockmart on Friday in a Region 5-AAA game.

Maynard ran for 317 yards on 25 carries with four touchdowns, and for good measure he also caught two passes for 54 yards.

It was the second time this season Maynard ran for more than 300 yards, and he also had a 297-yard performance in a game.

Maynard’s 300-yard night was part of a complete effort for the Cavaliers (6-1 overall), who improved to 2-0 in the region while winning their sixth straight game overall.

Callaway’s defense had its best showing of the season in the shutout victory.

Rockmart only had a handful of first downs, and when it got close to the end zone late in the game, Khaliq Swift came up with the interception to preserve the shutout.

Callaway’s defensive line controlled the line of scrimmage and had a dominant effort, and the linebackers had a bunch of tackles.

“Our defense really played hard and fast,” Callaway head coach Pete Wiggins said. “I felt like we really brought a physicality. The kids are playing faster each week, and they’re playing with more confidence. I was really proud of those guys

Callaway’s offense set the tone on the opening possession when Maynard had a long run deep into Rockmart territory, and he ended up scoring on a 5-yard run to complete that drive.

That was the first of Maynard’s four touchdown runs, and Noah Stephens added a 27-yard field goal in the second quarter.

Dre Martin, who had a busy night, threw a touchdown pass to DQ Wilkerson in the third quarter.

Martin is a starting linebacker and wide receiver, and he also played some at quarterback and returned punts against Rockmart.

Dylan Johnson started at quarterback for Callaway and played well in relief of the injured Braylon Sanders, and has been the case all season, the offensive line made sure Maynard had plenty of holes to run through.

As for Maynard, he surpassed 300 yards for the second time in three games.

Maynard nearly reached 300 yards against Harris County, but he “settled” for 296 yards on 27 attempts.

Against Rockmart, Maynard had touchdown runs of five, 25, 10 and 50 yards.

Callaway will be back home on Friday for a region game against Pepperell, and that will be the team’s homecoming game.