Chase for the playoffs is full-speed ahead 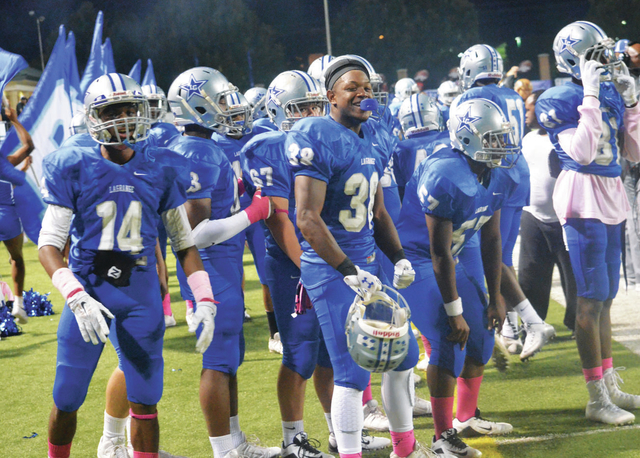 Quarterback Dylan Johnson and the offensive line gets in position for the snap during a game against Cedartown. Callaway will host Pepperell on Friday. Kevin Eckleberry | Daily News

http://lagrangenews.com/wp-content/uploads/sites/37/2015/10/web1_10-20-CHS2.jpgQuarterback Dylan Johnson and the offensive line gets in position for the snap during a game against Cedartown. Callaway will host Pepperell on Friday. Kevin Eckleberry | Daily News The LaGrange Grangers are hoping they’ll have plenty of reason to smile when they travel to Columbus on Thursday to play Shaw in a Region 1-AAAAA game. Kevin Eckleberry | Daily News

http://lagrangenews.com/wp-content/uploads/sites/37/2015/10/web1_10-20-LHS2.jpgThe LaGrange Grangers are hoping they’ll have plenty of reason to smile when they travel to Columbus on Thursday to play Shaw in a Region 1-AAAAA game. Kevin Eckleberry | Daily News

LAGRANGE – It’s not an absolute must-win game for the LaGrange Grangers, but it’s pretty close.

With a 1-2 record in Region 1-AAAAA, the Grangers face a critical road test on Thursday against the Shaw Raiders.

With three region games remaining, the Grangers know they’ll be in the playoffs if they win out.

If the Grangers lose one of their remaining three regular-season games, they could still earn one of the region’s four state-playoff berths, but it’s no guarantee that would happen.

For the moment, the Grangers control their own playoff fate, which makes the game against Shaw so important.

Also this week, Callaway will look to remain unbeaten in Region 5-AAA when it hosts Pepperell on Friday, and the Troup Tigers will be at home against Carrollton on Thursday in a Region 5-AAAA game.

In eight-man football, the Lafayette Christian School Cougars will host Holy Ground on Friday in a game they have to win to make the state playoffs.

LaGrange finishes the regular season against Harris County and Northside, two of the teams in a dogfight for a playoff spot.

LaGrange would have been in great position to possibly chase a region title if it could have beaten Carver, but it didn’t happen.

“We’ve kind of made our bed, now we have to play our way out of it,” LaGrange offensive coordinator Jay Floyd said.

For Callaway, the competition level will increase dramatically this week.

In its first two region games, Callaway faced a pair of teams in Cedartown and Rockmart with one win between them.

On Friday, the opponent will be Pepperell (5-2), which is 1-1 in the region after falling to unbeaten Central-Carroll 48-7 last week.

Despite that one-sided setback, the Dragons are having a good season, and before the loss to Central, they’d scored 91 points in their previous two games combined.

If Callaway beats Pepperell, it would be heavily favored the following week against a Haralson County team with just one win.

Callaway ends the regular season with what is shaping up to be another monumental game against Central-Carroll.

A year ago, those two teams met at Callaway Stadium for the region title, and it was Central-Carroll winning 40-34 after it returned a blocked field-goal attempt for a touchdown as time expired.

This year’s game is scheduled for Nov. 6 at Central-Carroll.

Troup will continue its rugged region schedule with Thursday’s home game against Carrollton.

In their first two region games, the Tigers played Woodward Academy and Sandy Creek, who have one loss between them.

Carrollton’s record is a more modest 4-3, but the team has won four in a row since starting 0-3.

In its two region games, Carrollton has outscored Fayette County and Whitewater 71-5.

The only points Carrollton’s defense gave up in those two games came on a Whitewater field goal.

Troup is 0-2 in the region and hasn’t won a game this season, but it is still very much in the playoff hunt, and that will be the case no matter what happens this week.

After the Carrollton game, Troup finishes the regular season against region opponents Fayette County and Whitewater.

If Troup wins both of those games, it would almost certainly be in the state playoffs.

Whether Lafayette Christian will still be playing after the regular season will be determined on Friday.

After splitting its first two region games, Lafayette Christian will host Holy Ground in its final region game on Friday.

If the Cougars win, they’ll finish second in the region and will qualify for the Georgia Independent Christian Athletic Association state playoffs.

If the Cougars lose to Holy Ground, they’ll finish third in the region, and their season will end following their regular-season finale against Ballard Christian on Nov. 6.