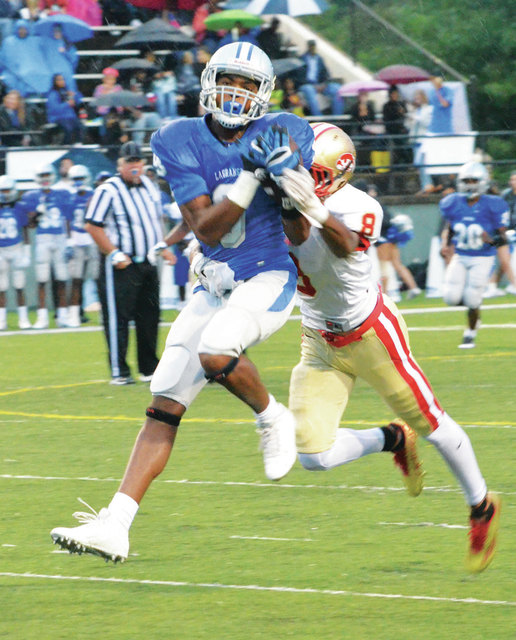 LaGrange quarterback LaPerion Perry goes back to pass while running back Kimani Barnes looks on. Perry accounted for five touchdowns in the 51-50 loss to Carver. Kevin Eckleberry | Daily News

http://lagrangenews.com/wp-content/uploads/sites/37/2015/10/web1_10-20-LHS-perry1.jpgLaGrange quarterback LaPerion Perry goes back to pass while running back Kimani Barnes looks on. Perry accounted for five touchdowns in the 51-50 loss to Carver. Kevin Eckleberry | Daily News LaGrange’s Mike Hardy makes a catch during a game against Hardaway. Hardy, who had two long touchdown catches against Carver, is averaging close to 30 yards per reception. Kevin Eckleberry | Daily News

http://lagrangenews.com/wp-content/uploads/sites/37/2015/10/web1_10-20-LHS-hardy1.jpgLaGrange’s Mike Hardy makes a catch during a game against Hardaway. Hardy, who had two long touchdown catches against Carver, is averaging close to 30 yards per reception. Kevin Eckleberry | Daily News

LAGRANGE – He felt like they were about to do something special.

As the LaGrange Grangers prepared for their showdown with the Carver Tigers, wide receiver Andrew Askew believed the offense was ready for a breakout performance.

With Askew doing his part by accounting for four touchdowns, the Grangers put 50 points on the scoreboard against a strong Carver team.

Unfortunately for the Grangers, those 50 points weren’t enough, with Carver putting on an offensive clinic as well on the way to a 51-50 victory in a game that featured 13 offensive touchdowns.

Still, it was a special night for Askew and his teammates on the offensive side of the ball.

“The whole week of practice, I couldn’t wait for the game,” Askew said. “We just came up short at the end.”

The whole offensive package was on display against Carver, and Askew was one of the primary play-makers.

He not only caught a pair of scoring passes, but he also threw two touchdown passes of his own to Mike Hardy.

As the Grangers headed into their summer schedule, Askew was one of the players vying to be the starting quarterback.

Junior LaPerion Perry was eventually tasked to be the quarterback, and Askew remained at wide receiver, and he was fine with that.

Askew has been a key cog in the offensive machine all season, and he had a monster game against Carver.

While he didn’t win the quarterback job, Askew has a strong and accurate arm, and he showed that in the Carver game.

In the first half, Askew took a backward pitch from Perry, and he tossed a perfect pass to Hardy for a 63-yard touchdown.

In the second half, Perry threw a backward pass to Askew, who once again dropped the ball right into Hardy’s arms for a 60-yard touchdown.

Did Askew think those two plays had a chance to succeed?

Askew also showed what he can do as a receiver.

On the Grangers’ second possesion, Askew was on the receiving end of a 14-yard touchdown pass from Perry.

In the second half, the Grangers had the ball on the 3-yard line when Perry tossed a pass to Askew, who caught the ball at about the 1-yard line.

Askew was hit short of the goal line, but he kept fighting, and he managed to get into the end zone for the go-ahead touchdown.

Askew had a handful of other catches that extended drives, including a 44-yard reception that put LaGrange deep in Carver territory in the closing moments.

That catch set up a field-goal attempt that would have won the game, but the kick slid by just right.

As dynamic as Askew was in that game, he was just part of the offensive puzzle for LaGrange.

Hardy had the two long touchdown catches from Askew, and Smith had an 18-yard scoring reception in the second quarter that gave LaGrange a 28-0 lead.

Hardy isn’t a volume receiver, but when he does make a catch, it’s usually for big yardage.

“When he catches them, they’re deep,” LaGrange offensive coordinator Jay Floyd said of Hardy, who is averaging close to 30 yards a catch.

Smith, who is also a standout defensive back, finished with seven catches against Carver.

As the season approached, Smith didn’t think he would have much of a role on offense, but he has been a full-time player on both sides of the ball.

“I really didn’t think about playing wide receiver this year,” Smith said. “I just thought I’d a defensive back. But coach (Dialleo) Burks told me I need to play two positions.”

Smith, who had more than 100 receiving yards during a game against unbeaten and state-ranked Mary Persons, is fine with that.

“Wherever coach puts me, I thank I can dominate,” Smith said. “Whatever position they put me in, I’m ready.”

Perry was brilliant against Carver.

He completed 21-of-33 passes for 238 yards with three touchdowns, and he also ran for 187 yards and had two long scoring runs.

Add it up, and that’s more than 400 yards of offense with five total touchdowns.

Perry has been a tremendous play-maker all season, beginning with a season-opening 45-20 win over Callaway, but Askew said he has made great strides throwing the ball.

While the Grangers were so effective through the air against Carver, they were getting it done on the ground as well.

It helped that, for the first time this season, LaGrange had all of its running backs healthy and ready to go.

Seniors Undriel Copeland and Kimani Barnes, who have both missed significant time because of injury this season, were running strong against Carver.

Copeland missed the first five games this season and didn’t play until the Columbus game, and Barnes missed some time with an injury after running well early in the year.

With those two both out for a big chunk of time, Amad Ogletree and Jeremiah Wright have helped fill that void.

“It was the first game where we had both of those guys at full strength,” Floyd said. “In the spring and summer, we were going to build around those guys. We haven’t had them. We’ve had some guys step in. Amad stepped in and played some running back. Jeremiah is really good there, too.”

The running game figured to be a strength of the Grangers this season, and they have had success on the ground.

The passing game, and this obviously coincides with the progress Perry has made, has been enormously potent as well.

Floyd said head coach Dialleo Burks, who was a successful professional wide receiver for a decade, has helped to develop the passing game.

“Coach Burks has really done a lot passing-game wise,” Floyd said. “He’s really brought a lot. That’s his expertise. He knows it inside and out. He came last week and said I think there’s a bunch of things we can do. It was all things that we did.”

Not to be overlooked is an offensive line that has been terrific all season, even without the presence of senior Luke Elder, who suffered a knee injury in spring practice and hasn’t played a snap.

As the Grangers prepare for Thursday’s key region game against Shaw, Askew doesn’t expect the offense to slow down at all.

“There’s so much talent,” Askew said. “You wouldn’t know what to do. You can put (Smith) at quarterback, you can put LaPerion at wide receiver. It doesn’t matter. There’s so much stuff we can do.”