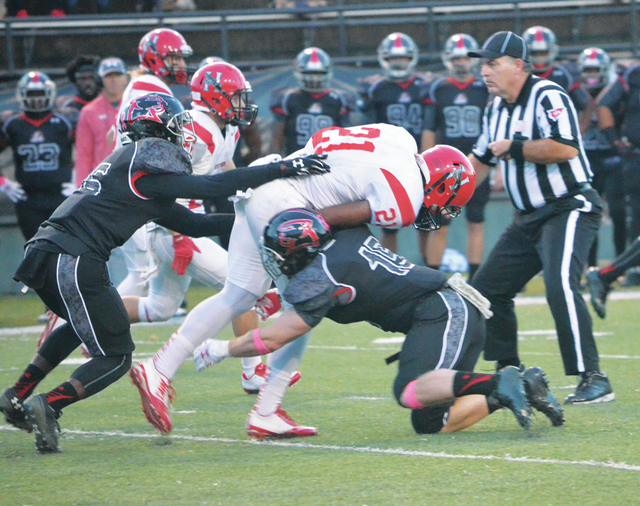 LaGrange College running back Jamarkis Holmes looks for running room during the first half of Saturday’s loss to Huntingdon. Kevin Eckleberry | Daily News

http://lagrangenews.com/wp-content/uploads/sites/37/2015/10/web1_10-19-LCfootball2-20.jpgLaGrange College running back Jamarkis Holmes looks for running room during the first half of Saturday’s loss to Huntingdon. Kevin Eckleberry | Daily News Heading into Saturday’s game against LaGrange College, Huntingdon had been averaging more than 40 points per game, but it was held to just three points in the first half by the Panthers.

The Hawks broke out in the second half, though.

Huntingdon scored three offensive touchdowns in the second half, and it also got a score on an interception return on the way to a 31-14 victory in the USA South showdown.

After a scoreless first quarter, the Panthers surged to a 7-0 lead on a Drew Lewiski 14-yard touchdown run in the second quarter, and they held the Hawks out of the end zone the rest of the half and took the lead into the intermission.

The Hawks took over in the third quarter.

The Hawks scored a touchdown on their first possession of the second half to take the lead, and they surged further ahead on an interception return for a touchdown.

The Panthers answered with a touchdown to get within three, but the Hawks put together two long, time-consuming scoring drives to put the game away.

LaGrange College quarterback Connor Blair completed 21-of-38 passes for a season-low 212 yards, and he had one touchdown and an interception.

Blair’s favorite target was Josh Hardrick, who set a school single-game school record with 12 catches for 111 yards, and he had a touchdown.

Ervens Oge had three catches, and he became the program’s all-time leader with 127 receptions, moving pass Griffin Roelle, who completed his stellar career with 126 catches.

It was all for naught, though, as the Panthers came up short in their bid to win two in a row for the first time this season.

After a Huntingdon punt late in the first quarter, the Panthers took over at their own 11-yard line and they went 89 yards in eight plays for the touchdown.

The big play on the drive was a 40-yard completion from Blair to Oge that put the ball at the Huntingdon 26.

After an 11-yard run by Nick Searcy and a 9-yard carry by Sequoh Humes, the Panthers had the ball at the 14-yard line.

On the next play, Lewiski took a handoff from Blair and took it in from 14 yards out, and Zack Kudwa’s extra point gave the Panthers a 7-0 lead with 13:24 left in the half.

The Hawks made it as far as the 16-yard line before the drive stalled, and a Chase Young 33-yard field goal made it a 7-3 game.

The Panthers had a great chance to add to their lead later in the half.

After a Jordan Daniels interception near midfield, the Panthers made it to the Hawks’ 16-yard line, but Kudwa’s field-goal attempt was blocked, and it remained a 7-3 game.

After forcing a LaGrange College punt at the start of the second half, Huntingdon got a 38-yard return from Jamichael Bibb to the 27-yard line.

When they got the ball back, the Panthers found themselves facing third-and-28 from their own 15 after a personal-foul penalty.

Blair put the ball in the air, and it was picked off by Austin Washington, who raced into the end zone for the touchdown, and just like that the Hawks had a 17-7 lead.

The Panthers responded, going 71 yards in nine plays for a touchdown they were hoping would slow the Hawks’ momentum.

Blair completed four consecutive passes on that drive to get the ball into Huntingdon territory.

Then on third-and-16, Blair found Hardrick for a 33-yard scoring pass, and with 5:13 left in the third quarter, Huntingdon’s lead was down to three.

The Hawks came right back with a 75-yard touchdown drive that was capped by a 19-yard scoring pass from Luke Bailey to Diggan Andre.

This time the Panthers were unable to answer with a score of their own, and the Hawks took over at their own 12 after a punt.

The Hawks embarked on a methodical, 17-play touchdown drive that ate up nearly eight minutes and ended with Jay Ware’s 2-yard scoring run, and the lead was 31-14.

The Panthers couldn’t do anything when they got the ball back and they had to punt, and the Hawks were able to run out the clock.

LaGrange College will look to get back on track when it visits Ferrum (Va.) on Saturday in a USA South game.