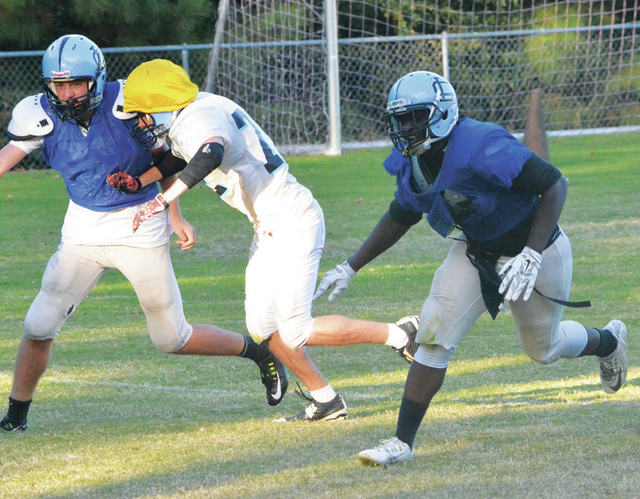 Lafayette Christian School’s Eli Shepherd will get a chance to play in an all-star game in Florida on Jan. 1. Kevin Eckleberry | Daily News

http://lagrangenews.com/wp-content/uploads/sites/37/2015/10/web1_10-21-shepherd.jpgLafayette Christian School’s Eli Shepherd will get a chance to play in an all-star game in Florida on Jan. 1. Kevin Eckleberry | Daily News LAGRANGE – He showed he belongs.

During the summer, Lafayette Christian School’s Eli Shepherd participated in a USA Football team development camp, and he was competing against and working out alongside some of the country’s top high-school players.

Shepherd held his own.

Shepherd, who is a linebacker and running back for the Cougars, made enough of an impression during the camp that he was invited to participate in the All-American Bowl that will be held in Daytona Beach, Fla. on Jan. 1.

The game features players from across the country, most of whom have received offers from big-time programs.

“I went to the USA development camp, and they rated me as one of the star players,” Shepherd said. “Out of 3,000 and something players (at camps across the country), I was one of the ones that made it. That was a great honor that they selected me.”

Shepherd said he’ll get an opportunity to play offense and defense during the all-star game, and he’s fine with that since he wants to take advantage of every chance he has to make an impression.

Shepherd said the caliber of players participating in the game is impressive.

“Every player that’s there has already committed to places like Alabama, or Georgia, Notre Dame, Michigan,” he said. “Everyone’s a Division I player.”

Most of the players are part of public-school programs and have high profiles, whereas Shepherd plays at a small private school that participates in an eight-man football league.

Shepherd has still found a way to get his name out there, and he will get a chance to play college football.

“You have to really work hard and show that you’re very determined,” Shepherd said. “I was very determined. I went to the camp, and I wanted to do something”

Getting this opportunity, Shepherd said, is “very incredible.”

As excited as Shepherd is about the all-star game, and about the prospect of playing college football, for the moment his main focus is on making the most of his final season of high-school football.

Lafayette Christian has a big game coming up on Friday against Holy Ground.

If the Cougars win the game, they’ll qualify for the Georgia Independent Christian Athletic Association state playoffs, but if they lose they won’t make it to state.

The Cougars advanced to the state semifinals in 2013 and 2014, so not making it to state would be a huge disappointment for a team with championship aspirations.

“People have been asking me how I stay so focused,” Shepherd said. “I just try to keep it all away, and just focus on my mission right now to win a championship here. And later on it’ll be my mission to do good at the All-American game.”

Besides, whatever he does in the future, Shepherd knows there’s nothing like playing high-school football.

Shepherd has been attending Lafayette Christian since he was in the eighth grade, and he got his first varsity playing time in a playoff game that year.

He wreaks havoc on opposing offenses from his linebacker position, and he’s a big-play threat as a running back.

Shepherd enjoys offense, but if he had to pick one side of the ball or the other, he’d probably go with defense.

Beyond the football field, Shepherd said he has had a great time at Lafayette Christian, a school that he said reflects his values.

“I’ve enjoyed it,” Shepherd said. “The community here, they treat me great. It’s been good. It’s a Christian environment. Everyone believes in God. That’s my main priority.”

Nick Nehring, who was Lafayette Christian’s head coach during Shepherd’s first four seasons in the program, said he appreciates everything he has done for the school.

“He has great parent support,” said Nehring, who is an assistant to head coach Nate Shaw this season. “We really appreciate he and his family. It’s been nice to have him. He’s been home-grown through the ranks. And we’ve got a couple of guys like that. It’s really nice to see.”