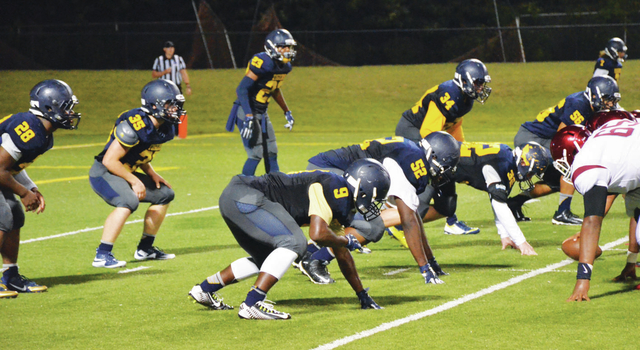 Troup quarterback Dexter Shealey takes a snap during a game this season. Troup will be at home against Carrollton on Thursday. Kevin Eckleberry | Daily News

http://lagrangenews.com/wp-content/uploads/sites/37/2015/10/web1_10-21-troup1.jpgTroup quarterback Dexter Shealey takes a snap during a game this season. Troup will be at home against Carrollton on Thursday. Kevin Eckleberry | Daily News Linebacker Austin Austin Carter will be one of the seniors honored before Thursday’s game. Kevin Eckleberry | Daily News

http://lagrangenews.com/wp-content/uploads/sites/37/2015/10/web1_10-21-troup4.jpgLinebacker Austin Austin Carter will be one of the seniors honored before Thursday’s game. Kevin Eckleberry | Daily News Troup’s defense gets lined up during a game this season. Troup’s defense will try to slow down the Carrollton Trojans on Thursday. Kevin Eckleberry | Daily News

http://lagrangenews.com/wp-content/uploads/sites/37/2015/10/web1_10-22-troup2.jpgTroup’s defense gets lined up during a game this season. Troup’s defense will try to slow down the Carrollton Trojans on Thursday. Kevin Eckleberry | Daily News

LAGRANGE – Progress can be hard to measure when you’re playing some of the best teams in the state.

The past two weeks, the Troup Tigers have played Woodward Academy and Sandy Creek, a pair of teams who will likely still be around well into the Class AAAA playoffs.

The Tigers have done a lot of good things in both games, but they were beaten 51-21 by Woodward Academy, and 49-14 by Sandy Creek.

“We feel like we’re getting better, but the level of competition is also getting better,” Troup head coach Tanner Glisson said. “The last two weeks with Woodward and Sandy Creek has been tough sledding, and it’s hard for the improvements to show up because you’re still getting exposed in certain areas.”

While the task may not be quite as daunting this week, Troup will still have its hands full with a red-hot Carrollton team in a Region 5-AAAA game.

Those two teams will face off at Callaway Stadium on Thursday at 7 p.m.

Carrollton began the season with three straight losses, but it has won four in a row since then, and it has overwhelmed both of its region opponents.

After beating Fayette County 30-2, Carrollton (4-3 overall) dominated Whitewater 41-3 to to improve to 2-0 in the region.

It has been a difficult season for the winless Tigers (0-7, 0-2 in region play), but they still have plenty to play for.

Even if Troup loses to Carrollton, it will head into the final two weeks of the regular season with a chance to make it to the state playoffs.

It’s a six-team region, and four of those teams will qualify for the state playoffs.

If Troup wins two of its final three regular-season games, it will be close to a lock to be one of those four teams.

Glisson, who is in his first season as Troup’s head coach, said everyone has remained positive, even as the losses have mounted.

The players and coaches are obviously hoping that hard work will translate into a win.

Carrollton will do its best to make sure that win doesn’t come for at least another week.

The Trojans are flying high at the moment.

Last week against Whitewater, Carrollton scored touchdowns on offense, defense and special teams on the way to the easy win.

Carrollton, which led 28-3 at the half, limited Whitewater to less than 100 yards of total offense.

Offensively, Carrollton got a big game from quarterback Mark Wright, who completed 10-of-12 passes for 141 yards with two touchdowns, both to Thomas Culwell.

Carrollton did it primarily on the ground, with Jarvis Terrell and Jaylan Thomas teaming up to create a formidable one-two combination at running back.

“Anytime you get any kind of win, it’s a good win,” Carrollton head coach Ed Dudley said. “I’m just really proud of these cats. They’re getting better every week now, playing together. We’ve got some great camaraderie going on. I could not be more proud of them.”

Troup figured to have a tough time of it against a strong Sandy Creek team, and that was the case.

Sandy Creek went on top 28-0 in the first half, and it went on to win its sixth straight game in convincing fashion.

The Tigers continued to move the ball well with quarterback Dexter Shealey at the helm and with running back Mess Bonner coming through with a strong effort.

In the first half, Troup had an impressive touchdown drive against a Sandy Creek defense that hasn’t been giving up much of anything this season.

Bonner had a 42-yard run to get the ball in Sandy Creek territory, and on a fourth-down play, Shealey completed a pass to Tremayne Tolbert.

After Shealey completed another pass to Tolbert, this one covering 10 yards, Camren Russell scored on a 2-yard run.

Carson Wreyford, who was in the game in place of injured kicker Michael Young, made the first of his two extra points to cut Sandy Creek’s lead to 28-7.

Sandy Creek answered with two touchdowns of its own to take a 42-7 lead at the half.

Trailing 49-7, the Tigers found the end zone again late in the game.

Bonner, who has ripped off a bunch of long runs over the past two seasons, went 90 yards for a touchdown, and Wreyford’s extra point capped the scoring.

With Shealey at quarterback, and with Bonner and Russell running the ball, and with Tolbert, Travis Johnson and others making catches, the Tigers have a potent offense.

Against Sandy Creek, the Tigers only had one three-and-out and they consistently put together sustained drives, although it only resulted in 14 points.

“Offensively, we continue to move the ball,” Glisson said. “What’s happening now is that field’s condensing once we get in the red zone, and we’ve got to continue to improve our red-zone offense. Between the 20s, I think we can move the ball on anybody.”

Defensive struggles have been an issue all season for the Tigers, although Glisson feels progress has been made there as well.

Troup is making more plays behind the line of scrimmage, and it is not giving up the big plays it was earlier in the season.

“Defensively it’s hard to see, but we really are getting better,” Glisson said.

One area where Troup continues to struggle is in kick coverage.

Glisson said that’s something the team has and will continue to work on dilligently during practice.