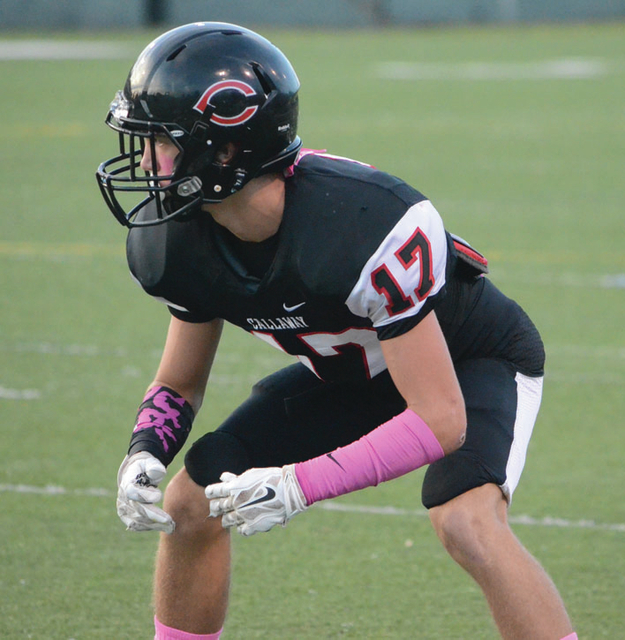 Callaway’s Jibrell Jackson makes a hit on a Heard County player during a game earlier this season. Jackson is part of a linebacking unit that has excelled this season. Photo by Eddie Sherrer

http://lagrangenews.com/wp-content/uploads/sites/37/2015/10/web1_10-22-CHS3.jpgCallaway’s Jibrell Jackson makes a hit on a Heard County player during a game earlier this season. Jackson is part of a linebacking unit that has excelled this season. Photo by Eddie Sherrer Callaway’s Javoski Leverette, right, waits on the snap during a game against Harris County. Leverette has come back strong this season after missing the 2014 season with a broken leg. Kevin Eckleberry | Daily News

http://lagrangenews.com/wp-content/uploads/sites/37/2015/10/web1_10-22-CHS4.jpgCallaway’s Javoski Leverette, right, waits on the snap during a game against Harris County. Leverette has come back strong this season after missing the 2014 season with a broken leg. Kevin Eckleberry | Daily News HOGANSVILLE – He knew it was bad.

When Callaway High’s Javoski Leverette’s leg twisted the wrong way during a practice session leading up to the 2014 season, he had no doubt it was serious, and that he wouldn’t be playing football for a while.

“I felt it,” a now healthy Leverette said following Wednesday’s practice session. “The way it turned, I felt it as soon as it happened.”

An X-ray revealed the extent of the injury.

It was a broken leg, and Leverette’s season was over before it began.

If there was some good news, it was that Leverette was only a junior, so he knew that he had one more season of high-school football to play.

Leverette is making the most of his final season.

Leverette, a senior linebacker, has been making plays since Day 1, and he has been among the team’s leading tacklers every week.

Leverette is part of a talented group of linebackers who have helped solidify a defense that has gotten better and better as the season has gone along.

Since a 45-20 loss in the season opener to LaGrange, Callaway’s defense has been in lock-down mode.

In the past six games, only Troup has scored more than 20 points against Callawy, and 21 of those 24 points came in the second half after the outcome had already been decided.

A week ago, Callaway beat Rockmart 37-0, and that was the team’s first shutout of the season, and senior linebacker Dre Martin was happy about that.

“We wanted the donut,” Martin said. “We needed it. We got the shutout.”

Callaway has a complete defense, with a dominant defensive front, a talented and ball-hawking defensive backfield, and a group of linebackers who have been terrific all season.

Among those linebackers are Leverette, Martin, senior Devin Brock, and junior Jibrell Jackson.

Of those three players, only Martin was a starter a year ago, although Leverette would have been in the lineup if he’d been healthy.

Jackson was a part-time player as a sophomore last season, and Brock was a defensive back.

Now, those four combine to make the linebacker position a strength for the 6-1 Cavaliers.

Having Leverette healthy and making plays is a major bonus.

Leverette has been in double digits in tackles in nearly every game this season, and he’s seemingly always around the ball.

“Being able to come back, I feel like I’m faster and better than ever,” Leverette said.

Although Leverette couldn’t play last season, he watched, he studied, he worked out as much as he could, and he made sure he’d be ready to go when he was able to play.

“In my spare time, all I do is watch football,” Leverette said. “I just want to get better, do the best I can do.”

The linebacker with the most experience is Martin, who has been starting since he was a freshman.

Martin is a busy man on game nights.

He’s a linebacker, he’s a wide receiver, he return kicks, and he even played some at quarterback in last week’s game and he threw a touchdown pass.

As for the defense, Martin said a key to the success is having players in positions where they fit best.

One of those players who has found his spot is Brock, who has excelled in his first season as a linebacker.

As defensive coordinator Dusty Hubbard started looking for someone to fill one of the two outside linebacker positions, he thought of Brock.

“We were looking for guys we felt like were physical and could run,” Hubbard said. “And one day I said, let’s play Brock over there. Let’s see what he can do. He’s gotten better every week. He understands it now, and what he needs to do. That position really fits his skill set.”

Jackson, whose most significant playing time a year ago was at fullback, has also thrived at linebacker.

Leverette said Jackson has made great strides as the season has gone along.

“He didn’t play much last year,” Leverette said. “He’s really stepping it up and bringing it.”

Michael Freeman has also played a lot at linebacker this season, as have Brandon Boddie and Thomas Hodge among others.

A lot of the tackles the linebackers accumulate are made possible by the performance of the defensive linemen, who have owned the line of scrimmage this season.

Among those linemen are senior JT Wortham, who has had a phenomenal season, and Rashawn Lovelace, Keegan Ramsey and Keegan Woods.

Lovelace had a huge effort in last week’s game with 10 tackles, including three for loss with two sacks, and Wortham had six tackles, and two of them were behind the line of scrimmage.

Hubbard said the improvement of the defense coincides with the progress made by the defensive linemen.

Callaway’s secondary has also been a strength, although there was one major personnel change at that position.

Dylan Johnson finished that game at quarterback, and he’ll remain at that position as long as Sanders can’t play.

Johnson has been tremendous at free safety this season, but as long as he’s playing quarterback, he’ll only be a part-time player on defense.

In the Rockmart game, Johnson played about five snaps on defense.

Sophomore Courtney Williams stepped in and filled Johnson’s starting spot, and while he did well, not having Johnson playing as much on defense is a blow.

“Being a smaller school, you get one or two guys banged up and it’s like a domino effect,” Hubbard said. “Now, not only is Braylon not our quarterback, but Dylan’s not our free safety anymore. It hurts you a little bit. It messes with the continuity on both sides. That’s a problem you deal with.”

With Tyrek Frazier and Dominic Copeland helping hold things down in the secondary, the Cavaliers are still in great shape in the defensive backfield, and Johnson will continue to get some snaps on defense.

Overall, it’s a defense that hasn’t always been dominant this season, but has made enormous strides and will continue to improve.

“We see them take strides every week,” Hubbard said. “If we continue to do that we’ll be good.”