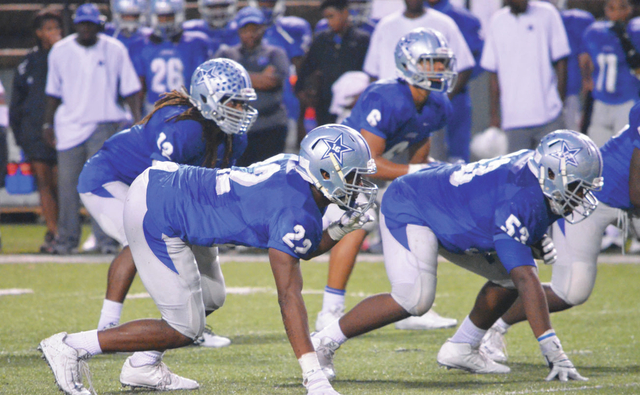 LAGRANGE – At the moment, the LaGrange Grangers are on the outside looking in.

By the conclusion of tonight’s game against the Shaw Raiders, the Grangers are hoping that has changed.

There are seven teams in Region 1-AAAAA, and four of those teams will end up making it to the state playoffs.

LaGrange heads into tonight’s game at 1-2 in the region, leaving it in a tie for fifth place.

If the Grangers win tonight, they’ll move past the Raiders and into fourth place, and they could be in third place by the time the week’s games are done.

It’s a six-team race for the four playoff spots.

Only Hardaway, which is 0-4 in the region, heads into the final three weeks of the regular season without a chance to secure a playoff spot.

Northside and Carver are tied at the top of the region with 3-0 records, and those two teams will face off in a big game next week.

Shaw and Columbus are tied for third at 2-2, and they both have tough matchups tonight.

While Shaw hosts LaGrange at Kinnett Stadium, Columbus will play Northside on Friday.

Harris County and LaGrange are both 1-2 in the region, and they will play next week at Callaway Stadium.

LaGrange controls its own playoff fate.

If the Grangers win their next three region games, they will be in the playoffs, and they still have a chance to finish as the number two seed and earn a home game for the state playoffs.

In Region 5-AAA, the two teams expected to vie for the championship are at the top of the standings.

Callaway and Central-Carroll, who will meet on the final night of the regular season, are both 2-0 in the region.

A year ago, it was Central beating Callaway 40-34 to capture the region title, and those two teams appear headed for another championship showdown this year.

Pepperell is also having a strong season and is 1-1 in the region, and it will have a chance to move into title contention with a win over Callaway on Friday.

Cedartown only has one win overall this season, but it is 1-1 in the region.

Haralson County and Rockmart have managed just two wins between them overall, and they’re both 0-2 in the region.

In Region 5-AAAA, a huge showdown is on tap tonight, with Sandy Creek traveling to Atlanta to play Woodward Academy in a game that could determine the region champion.

Woodward Academy and Sandy Creek, who are both ranked in the top five in the state and have just one loss between them, will each carry perfect region records into today’s game.

A year ago, Sandy Creek’s long run as a region champion came to an end, thanks in large part to a loss to Woodward Academy.

Carrollton, the region’s other unbeaten team at 2-0, will visit Troup tonight.

Whitewater (0-2), Troup (0-2) and Fayette County (0-3) are all winless in the region, but one of those teams will end up making it to the playoffs since the region is guaranteed four state berths.

Here are the region standings, with overall record first followed by region records, along with a schedule of this week’s games.