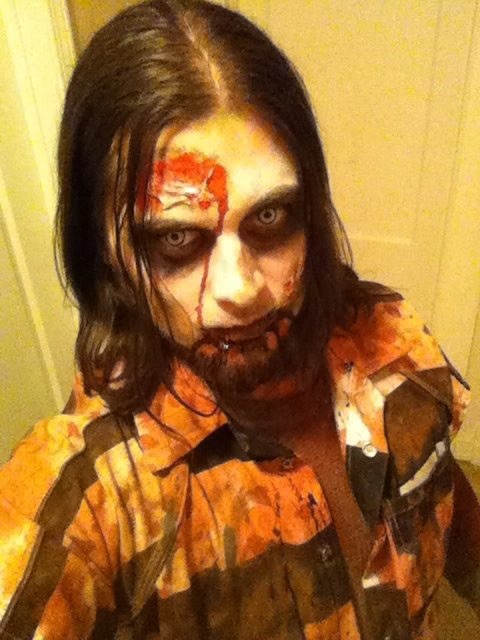 Cast members rehearse ‘Attack of the Zombies’ on Tuesday at the Lafayette Society for Performing Arts on Bull Street. The two-act show opens tonight and tickets are available by calling 706-882-9909.

http://lagrangenews.com/wp-content/uploads/sites/37/2015/10/web1_WEB1022Zombies_3.jpgCast members rehearse ‘Attack of the Zombies’ on Tuesday at the Lafayette Society for Performing Arts on Bull Street. The two-act show opens tonight and tickets are available by calling 706-882-9909. Cast member Randy Powell shows off his zombie makeup for the upcoming play ‘Attack of the Zombies’ at the Lafayette Society for Performing Arts.

http://lagrangenews.com/wp-content/uploads/sites/37/2015/10/web1_WEB1022Zombies_4.jpgCast member Randy Powell shows off his zombie makeup for the upcoming play ‘Attack of the Zombies’ at the Lafayette Society for Performing Arts.

LaGRANGE — With a bunch of college kids partying in a spooky old abandoned farm house, what could go wrong?

That’s exactly what audience members will find out at the Lafayette Society for Performing Arts’ performance of “Attack of the Zombies,” opening today. Spoiler alert: zombies attack.

The two-act play, written by Tim Kelly and directed by LaGrange resident Ryan McWhorter, stars a cast of more than 20 volunteer actors and McWhorter hopes the show will send chills up the spines of patrons.

McWhorter said the script may be simple and the storyline may be familiar, but he’s excited about showcasing the talents of his actors.

“It’s sort of an old throw back,” he said. “It’s the same simple storyline from the old horror movies from the ’50s and ’60s. … The house has a dark history and this old farmer shows up and tells the kids they should leave, but obviously, they ignore him and bad thing happen.”

This time around, the veteran director has actors who mostly have previous experience on stage.

“Actually, I think everybody in the show, with the exception of a couple of the zombies, has stage experience,” he said. “This may be one of the first ones in a long time when almost everyone has some experience.”

McWhorter’s brother, Josh, is one of the lead characters in the show. He’s had plenty of experience acting with the LSPA. He plays Howie Wilkins, a college senior who orchestrates the party, but in real life, Josh McWhorter isn’t exactly a Halloween fan, he said.

“Howie’s pretty fascinated by the macabre and all things Halloween,” he said. “I’m not a big Halloween fan but I still enjoy a scary movie now and then.”

Josh McWhorter said while rehearsing for the play, the lines came naturally, but delving into his character was another challenge altogether.

“In real life, I wouldn’t be at something like this,” he said. “I wouldn’t go to a zombie night or a haunted house, so it’s been challenging trying to get into the spirit of Halloween. That’s been the most difficult.”

He hopes his hard work getting to know his character will pay off for audience members.

“I think people are going to enjoy it,” he said. “It pokes fun at itself and it’s pretty light, but when it’s intense, it’s intense. The scare factor is there — if you’re engrossed in the performance.”

Performances will be held at the LSPA Black Box Theater, 214 Bull St.

‘No one deserves to be abused’ — Vigil in…