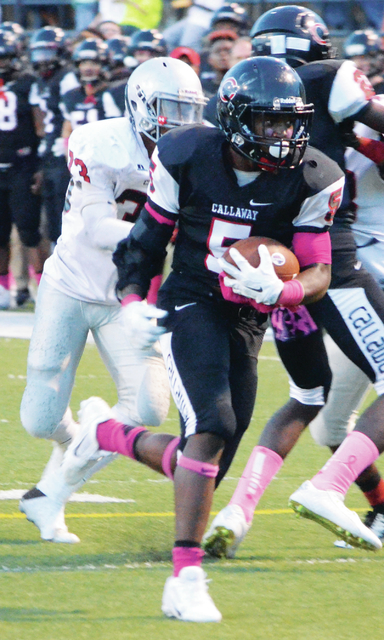 HOGANSVILLE – It had been smooth sailing for the Pepperell Dragons until they ran into an unbeaten Central-Carroll team last week.

Heading into that game, the Dragons had won five in a row, including their Region 5-AAA opener.

Pepperell was no match for Central-Carroll, though.

A pair of Central-Carroll running backs combined for 300 yards on the ground on the way to a 48-7 victory on Pepperell’s home field.

“We just could not tackle, one of the more basic things,” Pepperell head coach Rick Hurst told the Rome News-Tribune after that game. “We couldn’t tackle their runners the whole game, and we are going to have to work hard on that in practice because it was an issue.”

If the Dragons have trouble tackling against the Callaway Cavaliers, they could be in for another long night.

Callaway features one of the state’s top running backs in Cedric Maynard, who is having a remarkable senior season.

Last week against Rockmart, Maynard had his second 300-yard rushing game of the season, and in another game he had 297 yards.

Against Rockmart, Maynard had 317 yards and four touchdowns, and he also caught two passes for 54 yards.

The numbers for the season are staggering.

Maynard is averaging 219 rushing yards per game, and he gains close to 12 yards every time he touches the ball.

“Cedric’s speed is the obvious thing that makes him special because he has the explosiveness to take it to the house every time he touches the ball,” said Kurt Napier, Callaway’s running backs coach. “He is a really patient runner that has a good understanding of the game and the blocks happening in front of him. He has a knack for letting the play develop.”

Maynard is helped out by an offensive line that has done a great job of opening holes for him.

Fullback Brandon Boddie also clears out a lot of space, and the wide receivers do their part by providing blocks downfield.

As big a year as Maynard is having, the Cavaliers aren’t a one-dimensional offense.

Losing quarterback Braylon Sanders to a knee injury hurt, but Dylan Johnson brings a lot of ability to that position, and the team has some talented receivers including Dre Martin and Joe Brown, as well as sophomore DQ Wilkerson, who caught a touchdown pass last week.

Martin, who took some snaps at quarterback in the Rockmart game, threw the scoring pass to Wilkerson.

Pepperell’s offense isn’t too shabby either.

Although the Dragons were shut down last week, they’ve scored 40 or more points in four of their seven games.

Quarterback Trevor Thomas has done a nice job throwing the ball, and a strong rushing attack is led by Hunter Chastain, who is also a linebacker and kicker for the Dragons.

T.J. Watkins provides some big-play ability for the Dragons, and he had a 90-yard kickoff return against Coosa earlier this season.

“They’ll have a bad taste in their mouth,” Hubbard said. “They’re probably getting lit up pretty right now by their coaches. It’s a new coach, and from all looks, he’s got a lot of energy.”

If Callaway gets past this game, it will be heavily favored to beat a struggling Haralson County team next week.

Callaway ends the regular season with a road game against Central-Carroll that could determine the region championship.

Also today, Lafayette Christian School will put its playoff hopes on the line when it hosts Holy Ground in its final region game of the regular season.

If the Cougars win the game, they’ll qualify for the Georgia Independent Christian Athletic Association state playoffs, but if they lose, their season will end with their regular-season finale against Ballard Christian on Nov. 6.