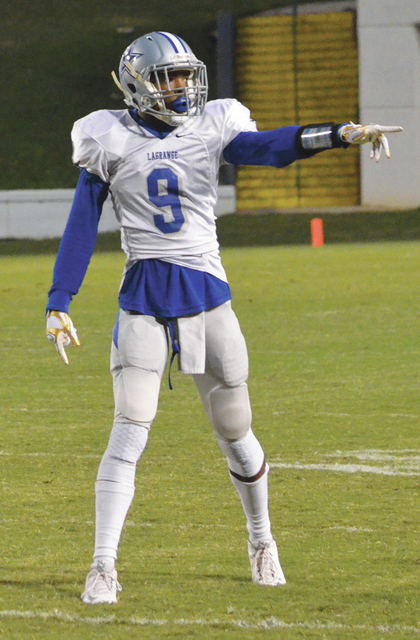 LaGrange’s Mike Hardy had a 52-yard touchdown catch in the second half. Kevin Eckleberry | Daily News

http://lagrangenews.com/wp-content/uploads/sites/37/2015/10/web1_10-23-LHS1.jpgLaGrange’s Mike Hardy had a 52-yard touchdown catch in the second half. Kevin Eckleberry | Daily News

LAGRANGE – They made a play.

In the closing moments of Thursday’s thrilling game at Kinnett Stadium, the Shaw Raiders found themselves on the 2-yard line, needing a touchdown and an extra point to pull even with the LaGrange Grangers.

The Grangers made sure that didn’t happen.

With five seconds left, quarterback B.J. Knight was sacked, and since the Raiders were out of timeouts, the clock expired, and the Grangers walked away with a 35-28 victory that greatly enhanced their chances of earning one of Region 1-AAAAA’s four playoff spots.

Had the Grangers lost, they could have still made the playoffs, but they would have needed some help from other teams.

Now, the Grangers control their own fate, and if they beat Harris County and Northside to close the regular season, they’ll be in the playoffs.

The Grangers have had trouble closing out close games this season, and they were coming off a 51-50 loss to Carver in their most recent game.

This time, the Grangers didn’t buckle when things got tight, and they found a way to get the win.

LaGrange head coach Dialleo Burks said that “shows the growth in the guys. That’s what we’ve been wanting. Now all we’ve got to do is continue to train ‘em.”

In a back-and-forth game with wild swings of momentum, LaGrange took the lead with 48 seconds remaining when Kimani Barnes took a short pass from LaPerion Perry on a third-and-15 play and turned it into a 57-yard touchdown.

The Raiders quickly made it down the field with Knight completing a pair of long passes, and they were on the 12-yard line with 33 seconds left.

Another completion gave the Raiders a first down at the 2-yard line with eight seconds remaining, and they had time for two plays.

On first down, Knight threw an incomplete pass, so it came down to one final play.

LaGrange got pressure and Knight was tackled before he could get the ball away, and that was that.

“We’ll take it any way we can get it,” Burks said.

Twice in the game the Grangers led by 14 points, but both times the Raiders came back to tie it.

In the first quarter, the Grangers scored a pair of touchdowns to build a 14-0 lead.

Perry got the scoring started with a 16-yard touchdown pass to Andrew Askew, and Thomas made the first of his four extra point to give LaGrange a 7-0 lead with 9:49 left in the first quarter.

After a Shaw punt, LaGrange only needed one play to score, with Perry throwing an 81-yard bomb to Askew for the touchdown, and the lead was 14-0.

Still up by 14, the Grangers attempted a fake field goal in the second quarter that was unsuccessful, and the Raiders embarked on a touchdown drive that was capped by a Sydarrian Cobb 1-yard run with 4:11 left in the half.

Again the Grangers drove it into Shaw territory, but they came up empty on a fourth-down play and had to give the ball up.

The Raiders threatened to put more points on the scoreboard, but Bo Russell came through with an interception with seconds left in the half, and the Grangers took a 14-7 lead to the locker room.

The Raiders showed off their big-play ability early in the third quarter, with Nick Beason taking a short pass from Knight and racing 86 yards for the touchdown, and the game was tied at 14-14.

Back came the Grangers.

Perry hooked up with Hardy on a 52-yard touchdown pass, and LaGrange led 21-14 with 6:10 to play in the third quarter.

Moments into the fourth quarter, LaGrange got it done on the ground.

The Raiders answered with a 25-yard touchdown pass from Knight to Cameron Paulding, making it a 28-21 game with 7:59 to play.

Eugene Mosely then came up with an interception, and Shaw was in business in LaGrange territory.

When the Grangers got the ball back, they were looking at third-and-long from their own 43-yard line.

Perry dumped a pass off to Barnes, who not only got the first down, but went all the way to the end zone for the 57-yard touchdown, and LaGrange led 35-28.

After Thomas put the ensuing kickoff into the end zone, Shaw needed to go 80 yards in less than a minute to tie it.

The Raiders got 78 of those yards, but they were unable to make it all the way to the end zone, and LaGrange had the win.

LaGrange will host Harris County next week before finishing the regular season with a road game against Northside.