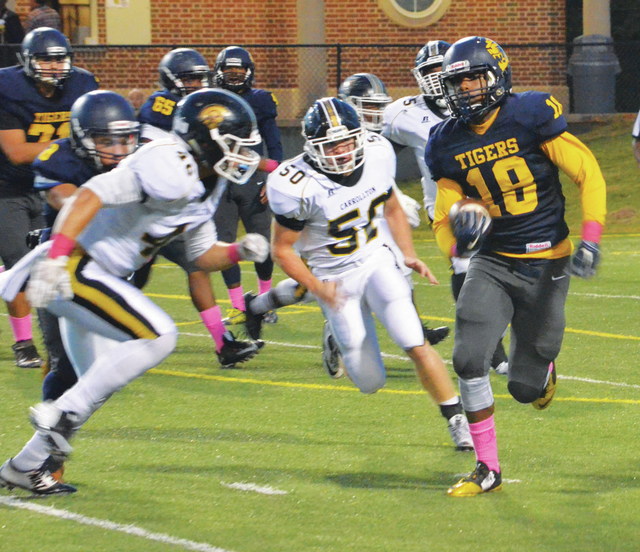 Troup’s Mess Bonner is congratulated by Chanse Hill after scoring one of his two touchdowns. Kevin Eckleberry | Daily News

http://lagrangenews.com/wp-content/uploads/sites/37/2015/10/web1_10-23-troup18.jpgTroup’s Mess Bonner is congratulated by Chanse Hill after scoring one of his two touchdowns. Kevin Eckleberry | Daily News Troup linebacker Seth Adams gets in position before a play. Adams had a pair of tackles for loss late in the game to help thwart a Carrollton drive. Kevin Eckleberry | Daily News

http://lagrangenews.com/wp-content/uploads/sites/37/2015/10/web1_10-23-troup25.jpgTroup linebacker Seth Adams gets in position before a play. Adams had a pair of tackles for loss late in the game to help thwart a Carrollton drive. Kevin Eckleberry | Daily News Troup’s Camren Russell breaks off a long run during the second half of Thursday’s game. Kevin Eckleberry | Daily News

http://lagrangenews.com/wp-content/uploads/sites/37/2015/10/web1_10-23-troup20.jpgTroup’s Camren Russell breaks off a long run during the second half of Thursday’s game. Kevin Eckleberry | Daily News Troup’s defense gets in position before the snap in the first half Thursday night. Kevin Eckleberry | Daily News

http://lagrangenews.com/wp-content/uploads/sites/37/2015/10/web1_10-23-troup13.jpgTroup’s defense gets in position before the snap in the first half Thursday night. Kevin Eckleberry | Daily News LAGRANGE – Things were starting to go their way.

After falling behind 28-7 in the third quarter of Thursday’s game against the visiting Carrollton Trojans, the Troup Tigers scored a touchdown to get within 14, and they had the ball back with a chance to take even more of a bite out of the deficit.

The Tigers made it all the way to the Trojans’ 13-yard line, and they were one big play away from making it a seven-point game.

The Tigers went for it on fourth down, but the running play was stuffed for no gain, and the Trojans got the ball back still ahead by 14 points.

Carrollton drove for a touchdown to extend the lead to 21, and it went on to claim a 42-14 victory in the Region 5-AAAA game.

He had a 65-yard scoring catch from Dexter Shealey in the first half, and he scored on a 41-yard run in the second half.

Carrollton (5-3 overall) improved to 3-0 in region play and wrapped up a state-playoff spot, while Troup (0-8) dropped to 0-3 in the region.

“He told me, that’s the best y’all have played all year,” Glisson said. “He said y’all have got better each week. And we are getting better. We’re just short-handed on some things.”

The Tigers still have a chance to make it to the playoffs if they beat Fayette County and Whitewater to end the regular season.

The Tigers have completed a brutal three-game stretch against Woodward Academy, Sandy Creek and Carrollton, and they did some good things in each of those games, although the outcome didn’t go their way.

“It’s not where I want to be, but it’s getting there,” Glisson said of his team. “We’re playing the hand we’re dealt right now.”

Early on in Thursday’s game, a Troup defense that has had its difficulties this season stood tall.

After Troup attempted a fake punt on its opening possession in its own territory, Carrollton took over at the 37-yard line.

The Tigers hung tough and stuffed a fourth-down play, keeping it a scoreless game.

On their second possession, the Trojans made it to the 17-yard line before the drive stalled, thanks in part to a sack by Ethan Short.

Carrollton settled for a field-goal attempt, and the kick was no good, and it remained a 0-0 game, which was the score as the first quarter ended.

The Trojans broke through in the second quarter, with Jaylan Thomas scoring on a 5-yard run, and it was a 7-0 game with 9:23 left in the opening half.

It took the Tigers one play to pull even.

On first down, Bonner took a short pass from Shealey, and he out-raced the Trojans’ defense for a 65-yard touchdown, and Michael Young’s extra point tied it at 7-7 with 9:04 left in the half.

Back came the Trojans, who drove for a touchdown when they got the ball back, with Thomas taking it in from one yard out to give his team a 14-7 lead.

After a short punt, the Trojans took over at their own 39-yard line, and they ended up scoring on a 31-yard scoring pass from Mark Wright to Thomas Culwell to push the lead to 21-7, and that was the score at the half.

The Trojans struck quickly in the third quarter, taking the opening possession of the half for the touchdown, with Jarvis Terrell scoring on a 7-yard run to extend the lead to 28-7.

With sophomore Montez Crowe in at quarterback after Shealey played the entire first half at that position, the Tigers needed seven plays to go 75 yards for the score.

Crowe had a pair of 9-yard runs to jump-start the drive, and he later completed a 10-yard pass to Travis Johnson.

Bonner did the rest.

After a 3-yard run on first down, Bonner took a handoff from Crowe and went up the middle for a 41-yard touchdown, and Young booted the extra point to cut Carrollton’s lead to 28-14.

Troup’s defense then made a big defensive stop, with Darrell Craw breaking up a pass on third down to force a punt.

After a nice punt return by Shealey, the Tigers had the ball at their own 37, and they continued to move the ball.

Crowe had a 9-yard completion to Ken Truitt, and Camren Russell had a 36-yard run to the Carrollton 18-yard line.

After picking up five yards in three plays, Carrollton’s defense was up to the challenge on fourth down, with a running play picking up no yards.

Carrollton took over with a little more than two minutes remaining in the third quarter, and it kept the ball for about five minutes and scored on a Jarvis Terrell 15-yard touchdown run.

To that point in the game, neither team had turned the ball over, but that was about to change.

Keegan Hill came through with an interception, giving the Trojans the ball at the Tigers’ 25-yard line.

Moments later, Thomas scored from 13 yards out to cap the scoring, and that gave him more than 200 rushing yards in the game.

The Trojans threatened to add another touchdown late in the game, but Troup linebacker Seth Adams made a pair of tackles for loss to keep them out of the end zone.