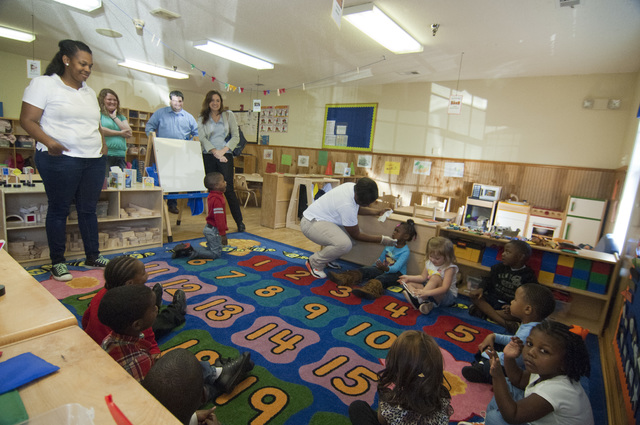 http://lagrangenews.com/wp-content/uploads/sites/37/2015/10/web1_HeadStart.jpgTeachers and staff prepare for a lesson with a Head Start class at the Childcare Network’s center on North Cary Street on Friday. Childcare Network was became the new recipient of a $9 million federal Head Start grant earlier this year.

Columbus-based Childcare Network, which already operates three centers in Troup, received a $9 million federal grant earlier this year to operate the Head Start and Early Head Start programs for a six-county region which includes Troup. Previously, the LaGrange-based nonprofit Community Action for Improvement received the grant, and the hand off is one of the first times ever a Head Start grant has changed hands in Georgia, according to Scott Cotter, president of president of Childcare Network.

“There’s been some confusion in the community about what was happening to the grant, and we certainly apologize for that,” Cotter said by phone Friday. “There wasn’t much we could control in regards to that. Either way, we’re excited about getting operational and beginning to deliver these service.”

At a Childcare Network center on North Cary Street on Friday, teachers ushered youngsters into a brightly lit and colorful classroom after the came in from outside time.

The center right now serves children from one and a half years old to 4, explained Mistie Thompson, the center’s director. The children are part of the federal Head Start program, which promotes the school readiness of young children from low-income families through local agencies. Head Start was established by Congress in an early form in 1965 after President Lyndon B. Johnson declared the War on Poverty during his state of the union address of 1964. Today, the program has expanded from its original eight-week summer camp model in 1966 to provide full school year, no-cost child care for children who are below elementary school age and living at or below the federal poverty line — today, $24,250 in annual income for a family of four.

Holly Calhoun, a director of family services with Shine Early Learning, which is partnering with Childcare Network to provide curriculum, said the Head Start program is a multifaceted operation and helps low-income families become self-sufficient.

“The most important part of Head Start that sets it apart from other educational programs is that we serve the whole family,” she said. “Not only do we make sure the child is getting what he or she needs, but we work with the whole family. What that looks like is we might help them to find jobs, housing, clothing, or we might help with parenting skills or medical issues. Sometimes we help them get transportation — it’s pretty endless. It’s really individualized and we meet with each family.”

Each day at Head Start, teachers provide students with early learning experiences, meals and other activities.

“The kids get here at about 8 a.m, some of them come in a little later,” said Mistie Thompson, the North Cary Street center’s director. “They get breakfast, then they have learning time and small group time. They get to go outside for a while before they come back in for lunch and then have an hour nap. Sometimes they go back outside and then they come in for snack and closing activities before they go home.”

Right now, we center is enrolling new Head Start participants and soon, Childcare Network will open locations on McGregor and Cannon streets. The McGregor Street location is a former city school that Community Action for Improvement, the previous grant awardee, used as a Head Start center.

“The locations on McGregor and Cannon will be Head Start only, they won’t have the pre-K or after school component,” he said. “But overtime our goal is to diversify services across the county, and across the state so that all of the services aren’t so concentrated and we cover a greater geographic location so that we can serve families that live in broadly dispersed areas.”

The families already served by Childcare Network’s Head Start program are as diverse as Cotter would like to see his company’s footprint, according to Thompson, the center’s director.

“We serve a very diverse group of children,” she said. “It’s all ages, all backgrounds. We have all different kinds of cultures and beliefs. We serve them all, here.”

For more information about Childcare Network, visit www.childcarenetwork.com or call 866-571-5437.