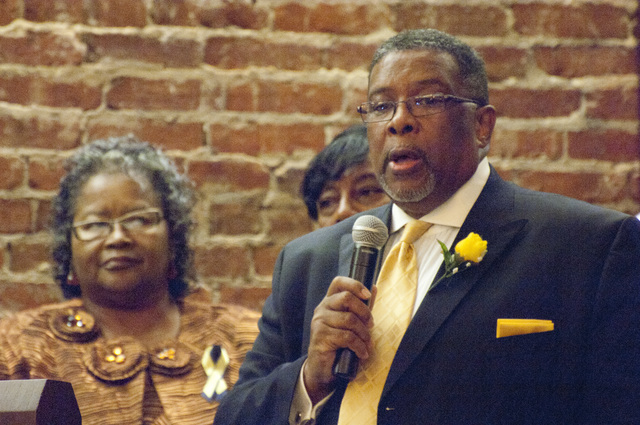 Former state Rep. Carl Von Epps addresses the crowd at the annual Troup County NAACP Freedom Fund and Honor Banquet on Sunday at the Del’Avant event space in downtown LaGrange. The chapter presented Epps and others with awards for their work advancing the causes of social justice and equal opportunity.

http://lagrangenews.com/wp-content/uploads/sites/37/2015/10/web1_NAACPDinner.jpgFormer state Rep. Carl Von Epps addresses the crowd at the annual Troup County NAACP Freedom Fund and Honor Banquet on Sunday at the Del’Avant event space in downtown LaGrange. The chapter presented Epps and others with awards for their work advancing the causes of social justice and equal opportunity.

More than 100 people attended the gala, which featured speakers, dinner and the presentation of awards to leaders who have contributed to social justice, civil rights and community building in LaGrange and the surrounding area.

“The conventional belief is that life of mankind will automatically get better, or that progress will just take place automatically,” said Ernest Ward, president of Troup NAACP. “However, this is sure a misconception. Human progress is never a guarantee. Progress only comes with the tireless work and persistent effort of dedicated individuals.”

Troup County Commissioner Richard English, one of the longest serving commissioners in Georgia, was awarded the Frank Hall Jr. Award for eliminating barriers of struggle and equal opportunity.

“This award is presented to the individual who fights for both civil rights and equality in Troup County,” said presenter Carolyn Haamid. “This individual has shown great concern for the community by demonstrating commitment, courage and definitely perseverance.”

Receiving the award, English said he was honored and thought of the award’s namesake.

“When I look at this, I think of Frank,” he said. “I think of the times that we were in court together, working to get the city of LaGrange (city council seats) redistricted. I appeared in federal court in Newnan with him. When you have an individual like Frank to work with, you enjoy it, and I still enjoy it. We’ve come a long way but we’ve still got some hills we’ve got to climb.”

English wasn’t the only one to receive an award.

“This award is given in honor of Sylvia Anderson, who was an educator in the city of LaGrange and Troup County school systems,” said presenter Lonnie Hollis. “She served as secretary for the Troup County NAACP and impacted the community through public service and generous dedication of her time to enhance the quality of life in the community.”

Epps accepted the award on behalf of Wolfe, who was unable to attend, and said he appreciated the community’s support going forward with the initiative.

“This initiative of change — this trust-building exercise — is part of an initiative of the three city mayors, Troup County and LaGrange College,” Epps said. “It’s long past due. There are many people who say we do not have a racial discord in our community, but all of us gathered here together know that there is, so we thank God for those individuals who support this cause. All we’re doing is building trust in our community.”

The Leadership Award is presented to an individual who has a clear vision for social change and carries out that vision through action, according to Ward, the NAACP chapter’s president. The award is for those who have helped lead others toward true understanding of civil rights and justice for all people.

“They’re able to see the unique values in all individuals while also building bridges to close the schism of our differences,” Ward said. “They are able to embrace change as an avenue for self-improvement and as a catalyst for better communities.”