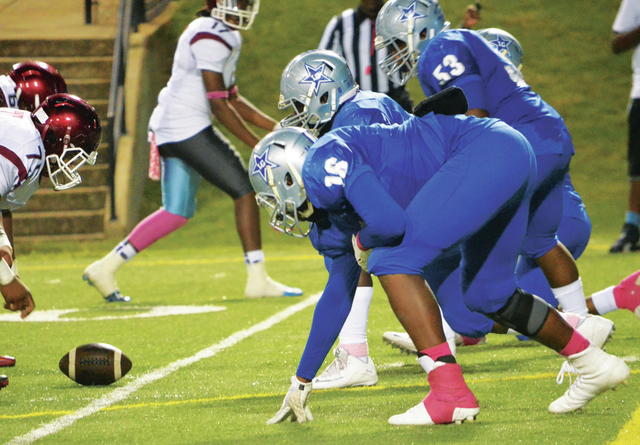 The Troup Tigers are 0-8, but they can make the state playoffs with wins in their final two games, beginning with Friday’s game against Fayette County. Kevin Eckleberry | Daily News

http://lagrangenews.com/wp-content/uploads/sites/37/2015/10/web1_10-23-troup14.jpgThe Troup Tigers are 0-8, but they can make the state playoffs with wins in their final two games, beginning with Friday’s game against Fayette County. Kevin Eckleberry | Daily News LAGRANGE – The LaGrange Grangers cleared one major hurdle last week in their quest to make it to the state playoffs.

The Grangers are facing another obstacle this week in the Harris County Tigers, who won the region championship a year ago but are struggling this season.

Those two teams will face off on Friday night at Callaway Stadium, and it will be LaGrange’s homecoming.

Also this week, Callaway will be at home against Haralson County on Thursday, and Troup will hit the road to play Fayette County on Friday.

Lafayette Christian School, which sewed up a state-playoff berth last week, is off this week.

LaGrange entered last week’s game against Shaw at 1-2 in Region 1-AAAAA and in desperate need of a victory.

Had the Grangers lost that game, they would have needed some help from other teams to finish in the top four and make it to state.

If the Grangers win this week’s game and their regular-season finale against Northside, they’ll be in the playoffs, and they still have a chance to finish second and secure a home playoff game.

First up will be a Harris County team that, at 1-3 in the region, has to beat LaGrange and Shaw to have a chance to make the playoffs.

Harris County opened region play with a hard-fought 30-28 loss to Northside before blanking Hardaway 49-0, but it has lost to Columbus High and Carver the past two weeks.

Here’s what has to happen for LaGrange to finish second in the region.

First up, LaGrange has to beat Harris County, and Northside needs to fall to Carver on Friday.

If those two things happen, LaGrange would finish second in the region with a road win over Northside on Nov. 7.

Callaway, regardless of what happens on Thursday against Haralson County, will play at Central-Carroll for the Region 5-AAA championship on Nov. 6.

Callaway is hoping to head into that game riding the momentum of an eight-game winning streak.

Since falling to LaGrange in its season opener, Callaway has won seven in a row, including Friday’s 35-14 victory over Pepperell.

The Cavaliers (7-1 overall) are 3-0 in the region, and they’ll look to stay unbeaten in the region with a win over a struggling Haralson County team.

Once the Haralson County game is over, Callaway can turn its full attention to the Central-Carroll showdown.

A year ago, those two teams faced off at Callaway Stadium for the region title, and it was Central-Carroll winning 40-34 when it returned a blocked field-goal attempt all the way for a touchdown as time expired.

This year’s Central-Carroll team is rolling along with an 8-0 record, although it did struggle to a 27-22 victory over Cedartown last week.

The Tigers can make the playoffs if they beat Fayette County this week and close the regular season with a win over Whitewater.

Fayette County (2-7 overall) improved to 1-2 in the region with last week’s 35-0 victory over Whitewater, and it would secure a playoff spot with a win over Troup.

If Troup is going to play its way into state, it will have to do it on the road.

After this week’s game, Troup finishes the regular season with a game at Whitewater on Nov. 6.