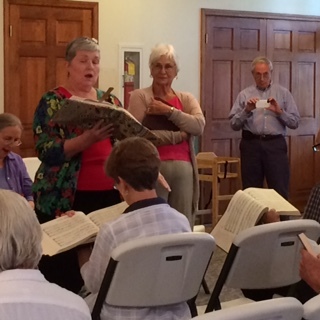 PINE MOUNTAIN — A group of about 70 people gathered at First United Methodist Church of Pine Mountain on Sunday afternoon to hear about and sing in the tradition of the sacred harp.

The event was co-sponsored by the Chipley Historical Center and the Methodist Church. John Plunkett from Atlanta and Oscar McGuire from Roberta were on hand to lead the discussion and singing.

Several other experienced Sacred Harp singers came from other parts of Georgia and from Alabama. Jimmy Coppage of Columbus, a descendent of B.F. White, also attended. In 1844, B.F. White, from Hamilton, and E.J. King, from Talbot County, collaborated on the first sacred harp song book published.

Sacred harp is a way of singing that uses four of the seven shape notes — “fa,” “so,” “la” and “mi.” The group forms a hollow square and singers take turns standing in the middle to lead, where all the voices meet together and harmonize. No instruments are used.

After a short lesson on scales and what shape to sing where, the group dove head first into singing, first from handouts provided by Plunkett and later from the 1991 version of “The Sacred Harp.” Different people would take turns standing in the middle of the square and leading songs of their choice. Beginners were invited to stand with an experienced leader so they could hear the voices harmonizing in the middle of the square.

Several attendees expressed interest in starting a sacred harp singing group in Harris County. Anyone interested should send your name, phone number and email address to Mary Mullins at mrm439@gmail.com or call 706-663-2250.

Church officials said they will try to get a singing together every quarter if there is enough interest.