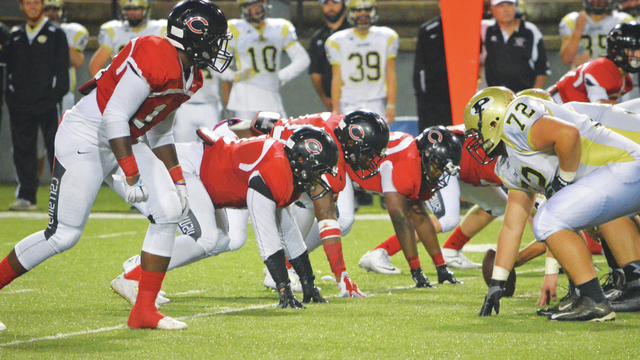 Callaway quarterback Dylan Johnson waits on the snap during last week’s game. Johnson, who is filling in for the injured Braylon Sanders, is playing well, and the offensive line has performed superbly. Kevin Eckleberry | Daily News

http://lagrangenews.com/wp-content/uploads/sites/37/2015/10/web1_10-25-CHS2.jpgCallaway quarterback Dylan Johnson waits on the snap during last week’s game. Johnson, who is filling in for the injured Braylon Sanders, is playing well, and the offensive line has performed superbly. Kevin Eckleberry | Daily News Callaway’s Dre Martin comes down with the ball for a 20-yard touchdown catch against Pepperell. Martin had two touchdowns in the game. Kevin Eckleberry | Daily News

http://lagrangenews.com/wp-content/uploads/sites/37/2015/10/web1_10-25-CHS22.jpgCallaway’s Dre Martin comes down with the ball for a 20-yard touchdown catch against Pepperell. Martin had two touchdowns in the game. Kevin Eckleberry | Daily News Callaway fullback Brandon Boddie provides a block for running back Cedric Maynard during last week’s 35-14 win over Pepperell. Maynard has a chance to reach 2,000 yards with a big game against Haralson County on Thursday. Kevin Eckleberry | Daily News

http://lagrangenews.com/wp-content/uploads/sites/37/2015/10/web1_10-25-CHS16.jpgCallaway fullback Brandon Boddie provides a block for running back Cedric Maynard during last week’s 35-14 win over Pepperell. Maynard has a chance to reach 2,000 yards with a big game against Haralson County on Thursday. Kevin Eckleberry | Daily News http://lagrangenews.com/wp-content/uploads/sites/37/2015/10/web1_10-25-CHS7.jpgCallaway’s defensive players get in position before the snap during the Pepperell game. Callaway’s defense clamped down on Pepperell after giving up an early touchdown. Kevin Eckleberry | Daily News

LAGRANGE – As the Callaway Cavaliers took the field for last week’s game against a strong Pepperell team, they were without two of their best players.

Quarterback Braylon Sanders was sitting out his second straight game with a knee injury, and senior offensive lineman Cortney Laye was also unable to play because of an injury.

Laye, a senior and a multi-year starter, is the anchor of the offensive line, so that was a significant setback for the Cavaliers.

The show goes on no matter who is unavailable to play, though, and the Cavaliers went out and delivered a dominant performance in a 35-14 victory over the Pepperell Dragons.

After falling behind 7-0, Callaway ripped off 35 consecutive points to salt the game away.

It was a critical win for the Cavaliers (7-1 overall), who improved to 3-0 in Region 5-AAA heading into Thursday’s home game against Haralson County.

Callaway will then play Central-Carroll on Nov. 6 for the region championship.

Callaway, after blowout wins over Cedartown and Rockmart, faced its biggest region test to date last week against Pepperell.

The Dragons drove down and scored a touchdown on their opening possession, but there weren’t many bright spots for them after that.

Callaway’s offense, even without Sanders and Laye, overwhelmed the Dragons.

Senior running back Cedric Maynard had 20 carries for 213 yards with three touchdowns, and he now has 1,750 yards for the season with 18 touchdowns.

Maynard’s touchdown runs covered 10, 40 and 90 yards, and he also had a 62-yard scoring run called back because of a penalty in the first quarter.

Many of Maynard’s touchdowns this season have come from long distance, and he now has two 90-yard scoring runs.

Johnson watches Maynard every day in practice, and he’s still amazed at what he does.

When he gets in the open field, he has rarely been caught.

“When I see the end zone, I’m gone,” Maynard said.

Maynard shares the credit for his success with his offensive linemen.

“They mean a lot to me,” Maynard said of his offensive linemen. “They’re my brothers. We work together. We’re family.”

Callaway head coach Pete Wiggins, who is the position coach for the offensive linemen, said “they’ve done a great job all year giving (Maynard) running lanes. We’ve had injuries, and we’ve rotated guys at different positions, and they just keep working, and they’re physical, and I’m just really proud of those kids up front.”

Fullback Brandon Boddie leads on a lot of the running plays, tight end Michael Freeman also does a great job blocking, and the wide receivers do their part by providing blocks downfield.

Dre Martin showed off his play-making abilities in the Pepperell game as well with a 77-yard touchdown run to go along with a 20-yard scoring catch from Johnson, and he caught four passes for 53 yards.

On his touchdown reception, Martin was interfered with and brought to the ground, but he still managed to his hands on the ball and make the catch.

Martin has been Callaway’s top wide receiver this season, and he is also one of the team’s top defensive players as a linebacker, and he returns punts.

After the Pepperell game, Wiggins expressed his appreciation for Martin.

“Dre Martin really had a special game for us,” Wiggins said. “He plays so many positions for us. He’s on offense, he’s on defense, he’s on special teams, and it’s rep after rep. I’m really proud of him. He just keeps working and gets better and better.”

Johnson said everything is coming together nicely on offense.

Johnson is doing his part.

When Sanders went down with his injury in the first half of the Cedartown game on Oct. 8, Johnson moved to quarterback, and he has remained there since.

Against Pepperell, Johnson threw an incompletion on his first pass attempt, but he didn’t miss again and ended up completing 7-of-8 passes for 85 yards with the touchdown.

Johnson also had some nice runs throughout the game to keep drives alive, and he had a successful two-point conversion run where he put his head down and drove a defender into the end zone.

“With Braylon out, I had to step in, and I’m just trying to do the same thing he was doing, keep the offense balanced,” Johnson said. “When he was in, when he was playing quarterback, the offense was going great, and hopefully with me coming in we can keep it balanced and keep it going like it was when Braylon was there.”

Devin Brock, who had a pair of second-half catches for 20 yards, said everyone has confidence in Johnson.

Callaway’s defense struggled on the game’s first possession, with Pepperell driving 78 yards in 11 plays for the touchdown.

After that, Callaway’s first-team defense didn’t give up another point, with Pepperell scoring a late touchdown against the reserves.

Courtney Williams, who moved into a starting spot after Johnson shifted to quarterback, had eight tackles from his safety position.

Linebacker Javoski Leverette and defensive lineman JT Wortham (the homecoming king) each had seven tackles, and Brock had two interceptions from his linebacker position.

Next up for Callaway is a Haralson County team that has had a difficult season.

Haralson County (1-7 overall) is 0-3 in the region, and it has given up 125 points in those three games combined.

Callaway ends the regular season with a game at Central-Carroll on Nov. 6, and the region title will be on the line.

A year ago, those two teams met at Callaway Stadium for the region championship, and it was Central winning 40-34 when it returned a blocked field-goal attempt for a touchdown.